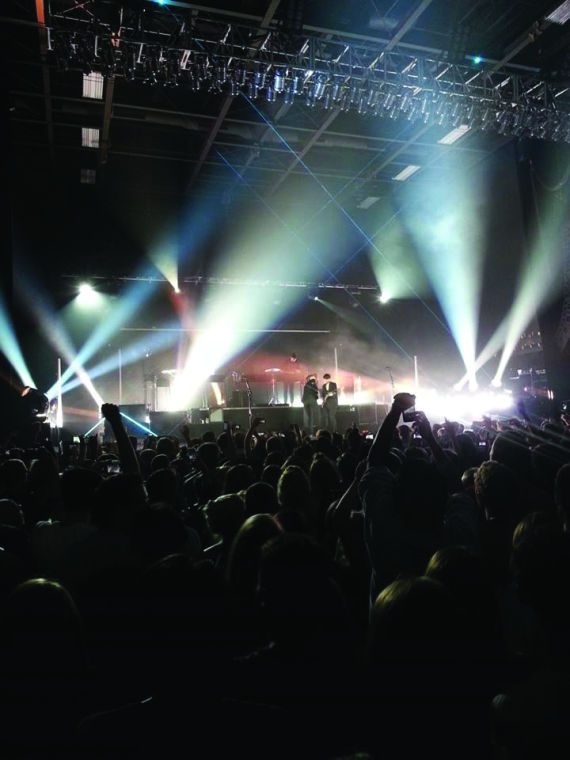 During their performance at Stage AE on Saturday night, The xx proved that sometimes real emotion comes not as a scream, but as a murmur.

By now, anyone who cares about music is familiar with The xx, the Mercury-Prize-winning trio from London whose sophomore release, Coexist, hit No. 1 on the British charts last year. With hushed, co-ed vocals and plenty of negative space between beats, The xx’s studio albums are as intimate and impassioned as the dialogue between lovers.

Although this makes for the perfect soundtrack to a chill evening at home, how would such low-key music translate at Stage AE’s indoor, 18-and-up venue packed nearly to capacity with noisy Pittsburghers? The xx, or perhaps their production team, seemed to have an easy solution for this: turn everything up.

Clad in black, with Romy Madley Croft and Oliver Sim both wearing long-sleeved button-downs that had the elbows inexplicably cut out, the band gave no introduction before launching into its set. From the first songs of the performance, they showed confidence with themselves, the crowd and the material. Sim swayed with his bass as he played, and Croft and Sim often came together to sing into the same mic, while Jamie Smith, a.k.a. Jamie xx, ran the beats by playing a hybrid of “real” and synthesized percussion. Smith aptly riffed on the band’s most popular songs, and on “Reunion” he achieved the unlikely feat of making a synthesized steel drum sound ethereal and even kind of sexy. Indie hits such as “VCR” and “Fiction,” far from losing their punch live, became anthems of mass catharsis, as the surprisingly age-diverse crowd clapped along with the beat and sang the choruses.

“Angels” was particularly good, due largely to Croft’s delivery being dead on. As she sang the refrain, “They would be as in love with you as I am,” half the crowd was hanging on her every syllable, while the other half of the crowd was singing along.

To be sure, this concert may have been a bit impersonal for those whose idea of a live show involves banter, storytelling or proselytizing. For me, the lack of conversation was no surprise, given the band’s rather reclusive persona. When they did speak, it was mostly to thank the crowd, a gesture that came off the same way as their song lyrics do: honest and heartfelt.

Even though there was no banter, The xx does travel with one of the best laser shows around, which along with the singing crowd made for a surprisingly friendly experience. With the vocals amplified such that every click was audible, Croft and Sim’s voices weren’t so much in my ears as they were inside my head. And like The xx’s music, their laser show was restrained and tasteful — which is paradoxical since, you know, it’s a laser show.

The xx, in their matching garb and echoed styles, may appear about as united as a military unit, but I would look for Croft to break out on her own — that’s my prediction. By the end of the night, she was beginning to stray from the script a bit, both melodically and emotionally, singing higher in her register and in a style that was less Air and more Haim. Maybe it was just a fleeting thing or perhaps it’s a new phase in their evolution, but from a young band that has already shown such total belief in themselves, it’s likely to be exciting.