Linklater’s latest his funniest yet 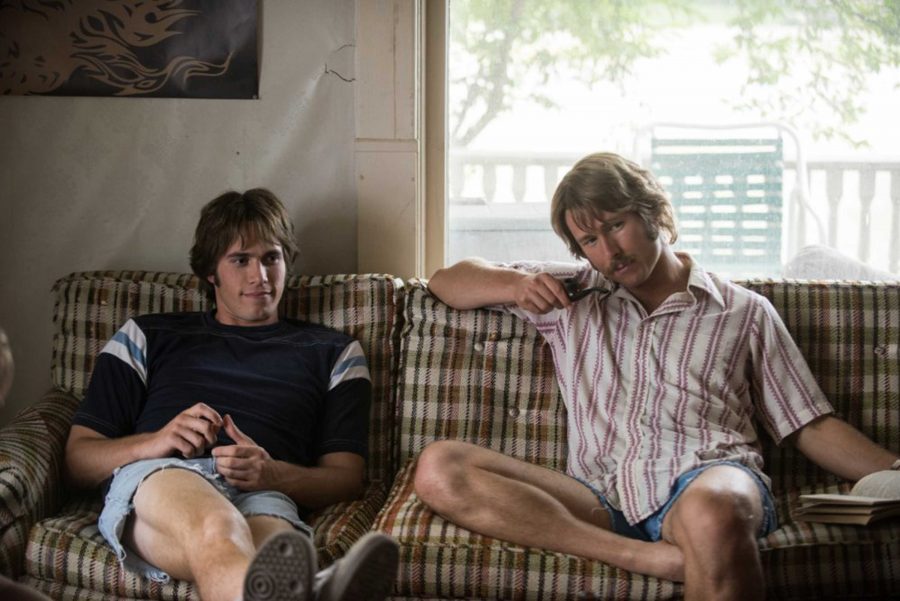 Glen Powell and Blake Jenner in "Everybody Wants Some!!" (Van Redin/Paramount Pictures)

Not many films that demand serious thought have exclamation points in their titles, but “Everybody Wants Some!!” earns that right.

Director Richard Linklater’s spiritual sequel to “Dazed and Confused” is like a perfected  “Animal House.” Though “Everybody Wants Some” depicts the revelry of a collegiate baseball team, it offers a wide-eyed yet warm take on the college experience — at times idealizing it.

The film begins as pleasant everyman Jake (Blake Jenner), a first-year pitcher, has just arrived to meet his baseball teammates at an unspecified college. The 16 players share essentially two frat houses, and the film traces the band of characters and their one-upmanship, sexual conquests and other exploits in the last weekend before school starts.

Recapturing the lived-in nostalgia that made its quasi-predecessor the cult classic it is today, “Everybody Wants Some!!” trades the 1976 setting of “Dazed and Confused” for the start of the next decade. The film takes every opportunity to bask in ’80s youth culture, particularly in its shameless pop soundtrack — “Whip It” anyone?

In between the hazing and general debauchery, Linklater also expresses some semi-autobiographical honesty – as he was twenty himself in 1980 – through his extensive cast of no-name wonders.

The crux of the film rests in the strength of Linklater’s written characters and the 20-somethings who play out this mostly naturalistic, occasionally dreamlike post-adolescent fable. As the events covered by the film span only 72 hours, time controls the plot, which is not unexpected based on Linklater’s past work such as “Boyhood” and the “Before” trilogy. But his trademark humanist philosophy and humor form a hysterical, freewheeling story instead of a sentimental retread.

The film earns its R rating and then some for its language alone, which is loaded with profanities. But sex, drugs and alcohol also make the usual rounds on-screen and in dialogue, given the sometimes dangerously inflated amount of attention that such indulgences can receive in the average college’s on-campus culture.

The film’s cast is uniformly solid, with each performer taking on a different archetypal role in the team’s social hierarchy. The first years try to fit in — Jake’s high school friend Plummer (comical newcomer Temple Baker) fares well, but the gullible, bulking Brumley (Tanner Kalina) does not.

The athletic assembly’s identity adapts to every party they attend, from big-collar disco dancing to cowboy hats and “Cotton-Eyed Joe” to moshing at an underground punk show. Thematically, Linklater touches on tribalism and brotherhood without turning a blind eye to the outdated sexism that comes with the time and place recreated. The objectification of women in the film is always portrayed from a satirical distance.

Though the film is steeped in an obviously male-centric perspective, Linklater works to make frat guys worthy of empathy through well-drawn, believable characters.

Like the best of Linklater’s work, this film mimics real life, from the sequence of events to the foibles of common speech. At its best, “Everybody Wants Some!!” feels like life truly lived.

More sensational and focused than its cinematic cousin — as we actually have a central character — “Everybody Wants Some!!” is easily on par with the quotable delights of “Dazed and Confused.” The film at once shows us that Linklater has lost none of his creative fervor since his experimental early days, while following the sprawling gamble that was “Boyhood” with something resonantly blithe.

For a director who constantly looks to define universalities through intimate narratives, it’s a relief to see that Linklater still knows when to sit back and simply let the good times roll.