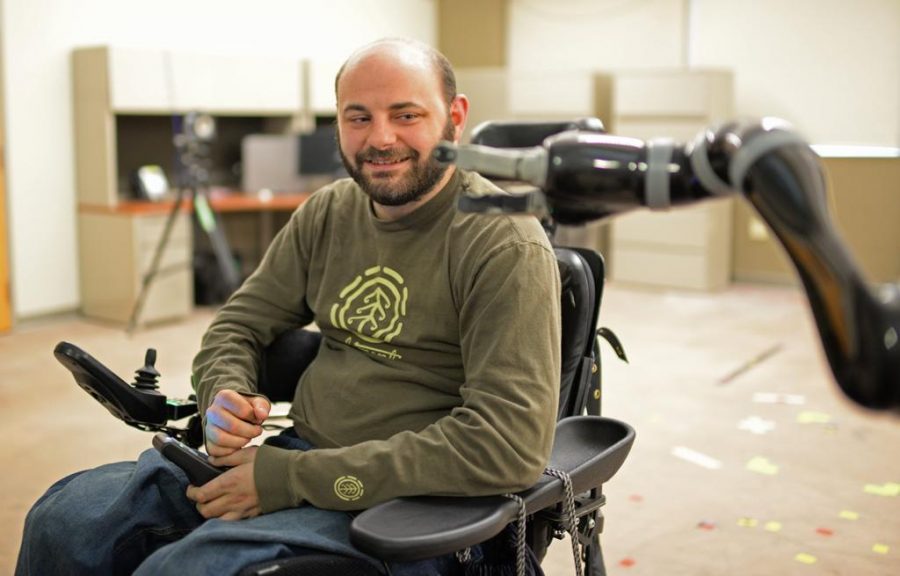 Students and faculty with disabilities look for representation on campus.
At her high school in the foothills of Pennsylvania’s Pocono Mountains, Monica Silny was in every AP class, a member of the history club — just as a “social thing” — and the 2015 prom queen.

Silny, now a first-year at Pitt, said she still stands out — not because of her bubblegum pink hair, but because she has muscular dystrophy and uses a motorized wheelchair.

At Pitt, Silny lives in Sutherland Hall on top of the hill. She hasn’t connected with the many athletes who live on her floor and spent most of orientation week alone in her room, unsure of how to navigate campus without assistance.

“I was scared that I wouldn’t have a very good college life,” Silny said. “If I went out anywhere [in high school] it was never an issue, because all my friends were trained in the art of helping me.”

In order to get to lower campus, she has to schedule Pitt’s lone disability shuttle weeks in advance. If she misses the shuttle, the hill from the Petersen Events Center is too steep to go down if her aide, Blake Hubert, isn’t with her.

Silny is one of almost 750 undergraduates at Pitt registered with the Office of Disability Resources and Services. Although that number has plateaued in recent years, according to Leigh Culley, director of DRS, students are now more apt to use Pitt’s resources.

“I would say [there’s an] increased awareness of what is a disability,” Culley said. “So people more than ever are able to continue attending school.”

According to the National Center for Education Statistics, 11 percent of students in post-secondary education reported having a disability in the 2011-2012 academic year. Fifteen years earlier, the percentage of students with disabilities in college was less than half that.

But in a 2009 survey from the National Center for Education, 70 percent of respondents said their four-year public university had “limited staff resources to provide faculty and staff with training on accessibility issues.”

Students at Pitt have lodged federal complaints against the University on the grounds of disability discrimination every year since 2010, according to records from the Office of Civil Rights. But that doesn’t make Pitt abnormal — compared to similarly sized schools, Pitt’s number of disability lawsuits are about average.

And few students have complaints specifically about Pitt’s DRS — for the most part, they said the office is always responsive. But a lack of institutional or visible representation on campus can make students like Silny feel isolated, and beyond the DRS’ six-person staff, some students and faculty members with disabilities want to know who’s looking out for them.

”How do we incorporate this?”

At Pitt’s Human Engineering Research Laboratory — a spacious floor of offices, workshops and laboratories in Bakery Square — students tinker with multi-colored wires fit for mechanical arms and cones made of 3-D-printed metal.

HERL founder and professor Rory Cooper, who has a spinal injury and uses a wheelchair, oversees the lab. Across from his desk is a sticker that reads, “Diversity Includes Disability.”

“I think that’s the crux of the problem,” Cooper said. Although discussions on diversity are always in vogue, people with disabilities — the biggest minority group in the United States — are frequently left out of the conversations.

“It’s all about diversity and inclusion,” Cooper said. “It sometimes make people feel excluded if you go to an event and the only thing available is a podium.”
Or, Cooper said, when students go into classrooms and see a room full of chairs with attached desks.

Or, as Andrea Sundaram, a second-year Ph.D. student in Pitt’s School of Rehabilitation Sciences, said, when technology that’s supposed to simplify his work and save time actually makes it more difficult.

Sundaram has been visually impaired since he was 5. When he needs to follow an open forum on CourseWeb, his screen reader can’t move along with the comments and jumps forward every time someone new adds to the forum.

“Is it accessible? Yes,” Sundaram said. “But it’s a royal pain.”

Professors usually have no problem helping students when asked, but Cooper said an advising body, like a committee on accessibility and accommodations, might make it so that every accommodation doesn’t have to be a special exception.

Pitt-Greensburg has an accommodations review committee that offers “a final review of disagreements concerning specific academic accommodation requests,” according to its website.

When Cooper worked with a manufacturer to make the milling machines in his laboratory accessible, he realized he had no way to share that process at Pitt to make it institutional knowledge.

“There doesn’t seem to be any clear responsibility,” he said. “I think there’s the willingness, I just don’t think that it’s been brought together in a way that is a good repository of lessons learned.”

To adapt to the needs of a growing minority population, some colleges have integrated entire programs devoted to advising on accessibility policies.

At the University of Washington, Carnegie Mellon University and about 20 other schools across the country, the DO-IT Center — which stands for Disabilities, Opportunities, Internetworking and Technology — promotes awareness and accessibility for people with disabilities.

Brianna Blaser, a counselor and coordinator at DO-IT, said the program works with University architects, for example, to ensure that buildings are accessible from their inception.

At Pitt, Culley said the DRS notes specific accommodations in students’ personal files. If an accommodation is going to cost money, the DRS will take it up with the “appropriate stakeholders.”

That’s Cooper’s frustration: Pitt has no problem making fixes, but usually does so retroactively. If accessibility measures were more frequently included in initial design, Cooper said institutions would actually save money.

In the late 1980s, Cooper was completing his doctorate in California before the Americans with Disabilities Act of 1990, a set of guidelines requiring that all public institutions be accessible to people with disabilities. Before the Act took effect, he said it already rattled some higher-ups.

“I remember [people saying], ‘Oh my God, it’s going to bankrupt us, it’s going to be unbelievable,’” he said. “It was actually pretty small … [Making accommodations] costs you money when you don’t think about it in advance and then you have to do something differently.”

Universal design — like making an entrance flat rather than building a ramp and steps, for example — makes technology and buildings accessible for everyone from the beginning.

Pitt has worked with ADA consultants before, and Culley said her office references some of DO-IT’s advice. But unlike the schools that partner with DO-IT and other similar programs, Pitt does not always bring in outside advice or an expert specifically on disability.

Pitt’s Director of Facilities Management Owen Cooks wrote about universal design when he was at Purdue University, penning a chapter for a 1996 book called “Universal Design: Creative Solutions for ADA Compliance.”

He said the architects Pitt hires are expected to be fully trained in UD.

Michael McDonnell, of the architectural firm IKM Inc., has worked on Pitt buildings at the Oakland and Johnstown campuses.

He said UD is becoming a standard of architectural education, but just as universities are now learning to plan ahead rather than fix after the fact, so is the design industry.

“It used to be when the ADA accessibility standards first came out that the designs industry was trying to figure out what this meant,” McDonnell said. “How do we incorporate this? How do we begin to change our thinking about design so that accessibility doesn’t become an afterthought?”

Silny’s room in Sutherland is a little messy, she admits, her desk overwhelmed with the contents of a purse she emptied before a calculus test earlier that day.

Backdropped by a Rosie the Riveter poster taped to the wall, Silny talks about how she’s learned to plan ahead more than the average student.

She’s learned to call restaurants before she gets there, signs up to use the testing center three days in advance and prepares for annoyed looks when the 10A stalls while the driver puts the ramp down for her.

“My entire life has to be calculated,” she said. “But that’s not my job — it is to a certain extent but my main job is to be just a student.”

Culley said the DRS exists to help students become more independent — she doesn’t have the ability to reach out to students before they come to her.

“I love that aspect of that job,” she said, “helping them problem-solve and see how they really develop those skills.”

Keren Kedem, a sophomore who has a learning disability, said she’s learned to “work twice as hard” to overcome challenges. Her grade school teachers almost convinced her she’d never make it to college.

But Kedem did get to Pitt, where she studies social work and joined Pitt’s chapter of Eye to Eye, a program for mentoring young students with learning disabilities.

“Before college I hadn’t really spoken to someone else with the same experience,” Kedem said.

“Even though it’s an invisible disability, it really plays such an important part in people’s lives … It’s nice to have other people who know how tough it is and can relate.”

Jon Duvall, a graduate student in Pitt’s School of Rehabilitation, founded the Students for Disability Advocacy group in 2012 to provide that resource.

As an undergraduate, a sledding accident on the hill by the Pete left Duvall with a spinal injury. He now uses a wheelchair.

He wanted the SDA to be representative of how many students at Pitt care about accessibility and inclusion, but it’s made up mostly of graduate and Ph.D. students, and hasn’t reeled in many new members.

“It’s always the same message no matter which community it comes from, it’s just the dignity and respect,” Duvall said. “It’s not like we don’t want to do the work or slag by, we just want to do the same amount of work and not have to do more.”

Professor Cooper said it all boils down to diversity. Culley said accessibility is an “institutional responsibility.”

In plainer terms, they both agree it’s part of Pitt’s job to make all of its students feel like they belong.