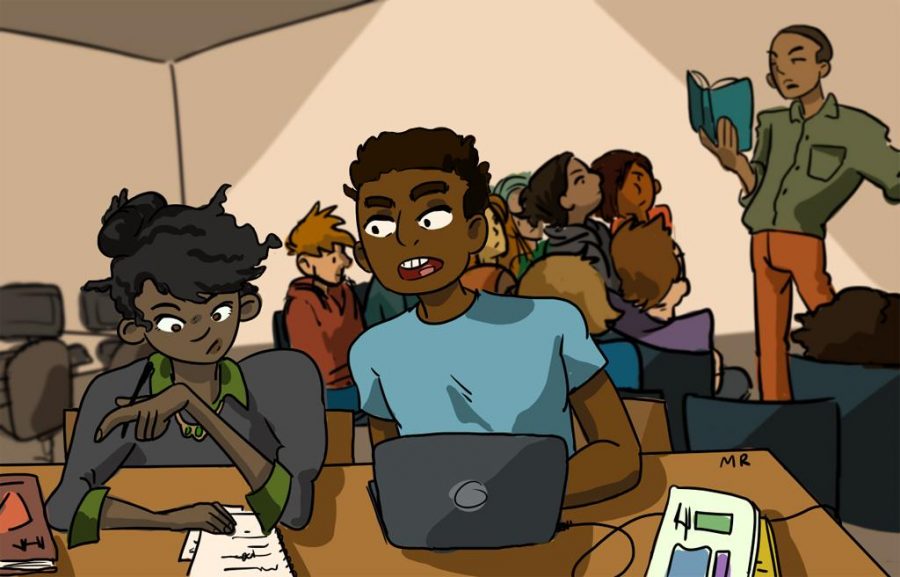 “We want to help to really put that MFA program on the map so that if you’re a black poet, the very first place that you would apply to and your top choice would be the University of Pittsburgh,” Lundy Martin said. “Right now, that’s not true.”

Pitt English professor Lundy Martin is co-founder and co-director of the CAAPP, which Pitt launched in March as a creative think tank for African-American and African diasporic poets and artists. Located on the fourth floor of the Cathedral of Learning, the Center records Pitt’s history as a home for black poetry and charts its future as a leader in the dialogue.

The first of its kind, the center started out as just a possibility over round-table conversation.

Don Bialostosky, chair of the English department, took Lundy Martin, Terrance Hayes and Yona Harvey out for coffee to discuss the best way to celebrate having the trio — all award-winning African-American poets — on faculty.

“In that brainstorming, I just blurted out this possibility. I said, ‘What if we were to think big, what if we were to start something like the Center for African American Poetry and Poetics?’ And then we all realized that that was the right idea,” Lundy Martin said.

Bialostosky proposed the idea at the end of the fall to John Cooper, Dean of Arts and Sciences. Cooper immediately said yes.

“We really didn’t have to make an argument,” Lundy Martin said.

Although the title is African American Poetry and Poetics, the Center covers the whole diaspora.

“African-American poetry is perhaps the most vibrant and powerful area of poetry in America today, and thinking about its poetics, the ideas that shape it, with poets and scholars both is an important opportunity to understand and to foster it,” Bialostosky said.

The Center’s faculty will help students and community members unpack black poetics’ investigations into historical, artistic and social movements such as Black Lives Matter and the Harlem Renaissance, and how they impact the present day.

“In light of recent events in Ferguson, New York and Baltimore that have once again revealed systematic police violence against African-Americans, this opportunity to offer a public venue to present the artistic engagement of poets could not be more timely or powerful,” said co-founder and co-director Hayes in a March press release for the Center’s event, “Poetry and Race in America.”

Ochester was honored in March’s “Poetry and Race” event for his service as editor of the Pitt Poetry Series, in which he has published many African-American poets, beginning in 1979. Ochester is credited for publishing black poets such as Derricotte, Afaa Michael Weaver, Nate Marshall and Ross Gay.

“Perhaps the most remarkable aspect of American poetry in recent years is the prominence, quality and diversity of the work of African-American poets,” Ochester said in a release for the event.

Cave Canem’s writing retreat is hosted at the Greensburg campus, and many poets who have participated in the retreat have gone on to win awards such as the National Book Award and the Pushcart Prize, including Elizabeth Alexander, Nikky Finney and Tracy K. Smith.

At the “Race and Poetry in America” panel, Derricotte recounted how she had not read a black poet in her entire educational career from grade school to graduate school, which made it hard for her to imagine becoming a poet.

In addition to the panel, CAAPP has held the Hayes-moderated “Poetry and Race: How the Humanities Engage with Social Problems,” which the Kelly Strayhorn Theater’s executive director Janera Solomon hosted, and a lecture in March titled “Race, Poetics, Empire: What is a Black Poetic and Why Does It Matter?” featuring poets Annie Seaton and Erica Hunt.

“I think [the CAAPP] belongs at the University of Pittsburgh because of the really diverse faculty who teach at the writing program, including three really accomplished African-American writers,” Lundy Martin said. “I don’t know of another program like it. Everything is just lining up right. I think it would be hard to do this someplace else.”

According to Mark Kemp, a lecturer and academic adviser in the English department, there are about 24 majors currently studying poetry writing, six creative writing minors with a focus in poetry and 11 graduate students studying poetry.

To study poetry, Harvey said, one must also study African-American poetry and poetics.

“The two are inseparable,” Harvey said. “As far as I’m concerned, anyone who teaches poetry without teaching African-Americans is not teaching poetry at all. The same is true for all poets of color. The poetry taught in the U.S. must be as diverse as the people who read it.”