Next In Line: Meet Chawntez Moss 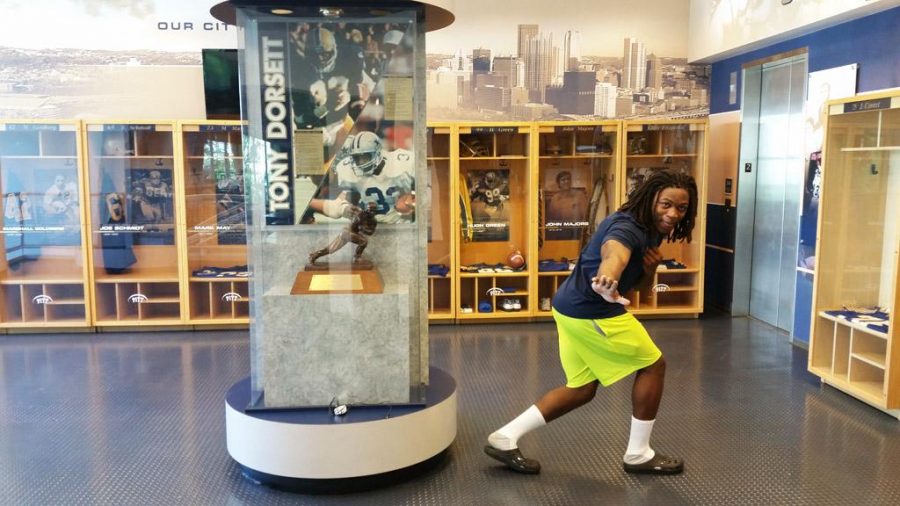 Just before the start of the Blue-Gold game on April 16, 2016, incoming first-year running back Chawntez Moss had to take a moment to reflect.

Moss was in a corner of the locker room with sophomore running back Qadree Ollison when he was handed his gold No. 26 game jersey.

“Come on, man, put it on,” Ollison insisted.

It was only an intrasquad scrimmage, but it was the first time the Ohio native had a jersey with his name on the back.

Whether playing football together, spending time at their Granny Ma’s house or just walking up and down Cleveland blocks from 30th all the way to 79th street, Moss and his brother — separated by only 13 months — were never apart as kids.

Chawntez Latrell Moss was born on November 8, 1997, to Cecil Moss Sr. and Aisha Williams. Moss has two brothers and two sisters, but he was always closest with his older brother, Cecil Jr.

The two made a dynamic unit on the football field. But when they tried out for their first team — the East Cleveland Chiefs — the coach didn’t realize it.

“They cut us, because we were scared to hit each other,” Moss said. “I was six, you know. I didn’t want to hit my brother yet.”

Two years later, Chawntez and Cecil were back on the field with the Maple Heights Lions.

“When I was eight, though, I was more competitive … I didn’t really care that he was my brother [anymore],” Moss said.

“Football was just a big part of my everyday life,” Moss said. “I think [it] really kept me out of a lot of drama in Cleveland.”

Moss would wake up at 7:30 a.m., walk to Bedford High School, lift with his coach, practice, then come back home and devour two packs of noodles. On Saturdays, he’d flip through the channels and watch whatever college football game he could find.

Any other day, you could find him and Cecil playing the “Madden NFL” video game into the early hours of the morning.

“It was just something positive for us to argue about and compete in other than on the field,” Cecil said of their Madden rivalry.

On the actual field, their sibling rivalry pushed the brothers to raise each other’s game.

Cecil was a starting safety at Bedford, but suffered three concussions during his junior season. He decided to get a job as a security guard rather than play in college after the birth of his son, Cha’rod, in November 2014. He plans on going to barber school to make some extra money.

“Believe it or not, I ran faster than [Chawntez] and jumped higher than him,” Cecil said. “But another thing he’ll tell you is that the only reason he got that good is because he was trying to be better than me.”

After receiving varsity playing time on kickoff coverage as a sophomore at Bedford, Moss would become the star running back and kick returner for the Bearcats during his last two years of high school.

Rivals ranked Moss the No. 35 running back prospect in the country out of high school after he rushed for more than 3,000 yards over his final two seasons.

As a junior, Moss piled up more than 2,000 rushing yards and a school-record 32 total touchdowns, putting up mind-boggling numbers without even starting the season as Bedford’s lead back.

The Bearcats won their first 12 games that year before falling to Mayfield High School, 34-32, in the Region 3 final. Moss delivered one of his best performances in the loss, rushing for 329 yards and three scores.

“That was significant for me because I had been playing football for so long and never won an MVP,” Moss said.

But as Bedford head coach Sean Williams tells it, one game from that junior season sticks out above the rest.

Facing Lorain High School, the Bearcats’ starting running back went down with an injury in the first quarter.

“I turned to Chawntez and said, ‘I want you to put the backpack on and carry this team. I’m going to feed you until you bust,’” Williams said.

Moss’ face lit up. The running back strapped an imaginary backpack on his shoulders and said, “‘I’m ready, Coach.’”

When it was over, Moss could barely feel his legs and Cecil had to carry him off the field — but it was worth it. He rushed for 294 yards and seven touchdowns on 39 carries in a 55-36 win.

“He’s as special as I’ve ever seen,” Lorain head coach Dave McFarland told Cleveland.com after the game. “He’s a hell of a back, I mean they don’t get much better than him.”

Williams graduated from Bedford in 1994 then enjoyed a brief NFL career as a cornerback with the Carolina Panthers and Kansas City Chiefs before coming back to coach the Bearcats. He said since he started coaching in 2002, he’s never had a running back as talented as Moss.

“I’ve never had a back that can run, has the vision, can block and catch the ball the way that Chawntez can,” Williams said. “That’s the thing that separates him, his ability to get in there and knock your Cadillac off and block.”

As a kid, Moss was a big fan of former Miami running back and NFL Pro Bowler Clinton Portis — a strong, fluid runner with breakaway speed and a knack for wacky post-game costumes.

But Moss’ favorite player, and the back whose shifty, elusive style he tries to emulate on the field? Former Pitt great and NFL All-Pro LeSean “Shady” McCoy, one of the most agile running backs to ever play the game.

When it was time to decide where to play in college, Moss had scholarship offers from numerous Division I schools.

But Williams steered him toward Pitt, telling him if he wanted to be one of the best running backs in the country, he should go to the place he calls “Running Back U.”

Moss was undeterred by the fact that Pitt’s depth chart already features a former ACC Player of the Year in redshirt junior James Conner and last year’s ACC Co-Rookie of the Year in Ollison at running back.

In fact, he views the competition as a plus. After all, striving to beat his older brother for so long is what got him to this point.

“The depth we have at running back just brings out the competition … when there’s that many people competing, it’s just going to make the best come out of everybody,” Moss said. “Nothing but good can come from that situation.”

There’s a hallway at Pitt’s South Side practice facility with all of the school’s records plastered on the wall.

While walking through the corridor for the first time with offensive line coach John Peterson, Moss said one day, his name will be hanging on the wall too.

In the running back meeting room, there’s a Wall of Greats celebrating the many legendary backs that make up Pitt’s historic legacy. One of the backs on the wall — Conner — is still on the team.

He’s set the bar high for his time at Pitt, but Moss — driven by a competitive edge and determination — has a more specific focus for the coming season.

“To play,” Moss said. “To get on the field and play as a true freshman, that’s already saying a lot. After I’ve achieved that, then I can go to other stuff.”

The desire to get on the field this fall is a big reason why Moss finished high school early and enrolled at Pitt in January.

“I came early just to pretty much stay out of trouble, and to get a jump on … just getting to know the guys, know the playbook,” Moss said. “I know we added a new offensive coordinator [Matt Canada], so my best chance to play would be getting here early.”

Moss said he has already been told by coaches he will not be redshirting this year, meaning barring any unforeseen setbacks, he is expected to see playing time.

He had already won over his teammates with his performances in practice when it came time for the seniors to pick the rosters for the Blue-Gold game. Although the captains had the option of selecting proven backs like Ollison and Darrin Hall, Moss was the first one off the board.

“It showed me that [the seniors] bought into me, they bought into my work ethic and what I had to bring to the team,” Moss said. “Once you win over the locker room, playing becomes more comfortable and it becomes easier, so that was a great experience.”

Once the euphoria of seeing his name on the back of his jersey for the first time faded, it was time to get that new uniform dirty.

In his first time experiencing the game at the Division I level, Moss received his “Welcome to college” hit, as he put it, from one of his own teammates.

The Blue team beat Moss’ Gold team, 19-17, who had to settle for hot dogs and beans afterward while steak and lobster went to the victors.

But it didn’t matter to Moss. For this game, the outcome was an afterthought.

“Playing in that stadium, in that uniform, it was great,” Moss said.

His journey at Pitt is just beginning, but right now, Moss is busy wrapping up his previous journey as a high school kid from “Down the way,” Cleveland.

Moss made the trip home to attend his high school prom with his longtime friend, Angel Miller, on May 19. He will take one more leave of absence to walk at his high school graduation on June 1.

Although the Pitt career Moss was so eager to jumpstart had to be put on hold for a night, his high school coach knew he wouldn’t be gone long.

Williams was right — Moss returned before the weekend was over.

Catch Chawntez Moss and the Pitt Panthers as they kick off the 2016-17 season against the Villanova Wildcats at Heinz Field September 3, 2016, at 1:30 p.m.