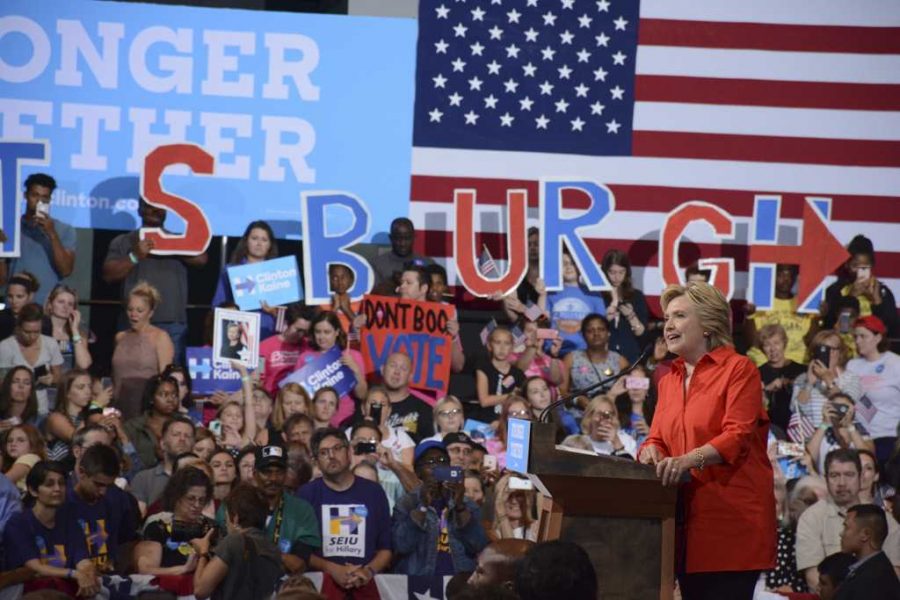 Then Clinton spoke, touching on policy such as a promise to pass a new infrastrucrtyre spending billl within her first 100 days, including broadband internet access for every home and business. Stephen Caruso | Visual Editor

By Alexa Bakalarski and Stephen Caruso / The Pitt News Staff

With the conventions of both parties now in the rearview mirror, the road to electing the 45th president of the United States is just beginning – with a stop in Pittsburgh.

Accompanying her was vice presidential nominee and US Senator from Virginia, Tim Kaine. This was the pair’s first trip to the region together since Clinton announced Kaine as her running mate on July 22.

During her speech, Clinton spoke about increasing Internet connectivity across the nation, equal pay, making community college free and offering tax credits for businesses who provide apprenticeship programs, among other issues.

Beaver Falls resident and teacher Catherine Greer said she has supported Clinton “since Day One.”

“[Clinton is] a strong leader, she’s experienced, she knows what it’s like to be in the White House,” Greer said. “She’s not just willing, but anxious and passionate to be our president…She’s given her whole life to our country and she wants to do it some more.”

Outside the Convention Center, people lined up to hear Clinton speak, buying pins and T-shirts from vendors while they waited. Across the street, supporters of Republican presidential nominee Donald Trump waved placards and hurled anti-Clinton rhetoric.

Holding a sign that read “don’t put coal workers out of work,” Susan Balukin, a member of the protest, said America “is on the wrong path.”

“I’m 66 years old and this is my first protest,” Balukin said. “I’m doing something because my fear for the country is that great.”

Inside, a more optimistic tone took hold. After some brief words by local Democratic organizers, Pennsylvania House of Representatives member Ed Gainey took the podium to start a chain of speakers leading to the two nominees.

“We’re not going to just break the glass ceiling,” Gainey said. “We’re going to shatter it.”

Braddock Mayor John Fetterman was joined by his daughter Grace, who he called one of his reasons “to vote for Hillary.” Despite being a former member of “Team Bernie”, Fetterman followed the lead of the Vermont Senator and former Clinton rival Bernie Sanders in endorsing Clinton.

“To my friends and the people that supported me that supported Bernie, I implore you,” Fetterman said. “Not as a Democrat, not as a mayor, but as a father of three young children, please do not sit this [election] out.”

Like Fetterman, Garfield resident Kelsey Pendleton supported Sanders at the beginning of the election season, but switched to supporting Clinton after he “gracefully bowed out” of the race. She always liked Clinton though, making her feel “stuck in the middle” for a chunk of the election.

“She’s really for America,” Garfield said about Clinton. “I think she is a selfless servant to our country. The principles she stands for are progressive principles — in the direction this country needs to be heading.”

Turning to her former allies, Garfield was not as kind, calling the Bernie or Bust movement “ridiculous.”

“This is the president of the United States,” Garfield said. “You can’t just take your ball and go home when you lose. This isn’t some silly game.”

Politicians weren’t the only ones who took to the stage – billionaire businessman and Pittsburgh native Mark Cuban was also a guest, officially endorsing Clinton for President of the United States at the event.

“In Hillary Clinton’s America, the American Dream is alive and well,” Cuban said before introducing the Democratic ticket to a cheering crowd.

Clinton, whose speech began around 7:30 p.m., reinforced her reputation as a policy wonk. The former Secretary of State revealed a large-scale infrastructure plan, to be introduced during her first 100 days in office. She went on to highlight a proposal for expanding the nation’s broadband Internet access.

“How are we going to get a competitive 21st century economy and take on and win in the world if we can’t even get broadband — we can’t even get Internet connectivity to every home and business?” Clinton asked.

Clinton also said she plans to make public colleges and universities debt-free, giving students ways to refinance their debt by lowering interest rates and making payments as a percentage of income.

Before ending her address, Clinton mentioned Cuban’s speech, in which he talked about his journey to becoming a billionaire and how he failed multiple times along the way.

“You learn by trying,” Clinton said. “I want to encourage more Americans not just to dream again but try again.”