Brew Crew: Pitt students drown themselves in the DIY world of beer brewing 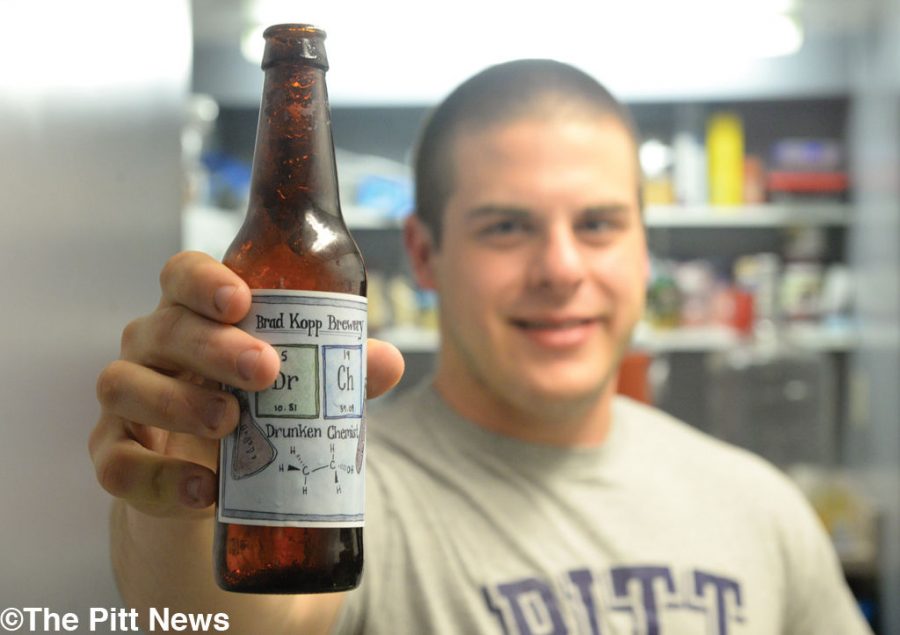 The first beer Brad Kopp ever brewed fell flat for his father.

“It had such a sour taste,” Kopp said. “My dad has the corniest sense of humor, and he still hasn’t let me live it down. Every time I give him a beer, he says ‘Is it going to taste like that first one?’”

Kopp, a senior chemical engineering major, brews his own beer, a family tradition he’s picked up as a college hobby. He is self-proclaimed “beer nerd,” a title more Pittsburghers seem to be picking up as interest in the activity grows. This do-it-yourself brewing movement has grown over the last few years in Pittsburgh and Kopp, along with other locals, are ditching big brands for their own recipies.

After dozens of batches of beer, however, Kopp has developed into a talented homebrewer whose unique blends receive critical acclaim.

“I’ve gotten positive reviews from a couple brewmasters,” Kopp said. “One of my beers is under review to potentially be produced industrially.”

Kopp’s family first inspired him to brew beer. He grew up in St. Marys, Pa., home of Straub Brewery, where his cousin designs craft beers as part of the research and development team.

“I always thought, ‘This is something I could really pick up,’” he said. “I’ve loved it ever since.”

For those whose family traditions don’t include brewing beer, there are classes available in Pittsburgh for first-time brewers — and there are a lot of first-timers.

Susan Sternberger, Theater Services Director for the Pittsburgh Cultural Trust, has programmed themes for the Trust’s Craft Beer School since the program’s 2007 inception.

Approximately 250 brewing students meet monthly to sample and discuss four different types of craft beer.  A panel of experts, brewers, distributors and beer judges are available to answer questions at the sessions.

Sternberger said she’s not a “beer expert,” but she still has her favorites brews, such as imperials, stouts and anything with chocolate, and she appreciates the brewing process.

Kopp learned the basics of brewing his beer from experience, instead of from a class, after obtaining a job at City Brewing Company in Latrobe, Pa., through the Swanson School of Engineering’s cooperative education program. He expanded his brewing knowledge by reading books and watching instructional YouTube videos. Kopp also works a co-op job at City Brewing and as a brand representative for Straub, his hometown brewery. He tastes different beers through his job that aren’t always available in stores. One of his favorites, however, was his own invention: a Scotch ale, which Kopp said had a caramel flavor.

His friends and family enjoy Kopp’s pumpkin dunkelweizen, another of his signature brews.

“I had people asking to put in pre-orders for next year. It felt good to know that people really enjoyed it and would buy it,” Kopp.

For now, however, Kopp’s brewing remains a hobby. According to the Pennsylvania Liquor Control Board, people without a manufacturer’s license can produce, but not sell, up to 200 gallons of beer per year.

Another Pitt student has joined the craft beer trend as well. In the spring of 2013, Chris Boland founded the Pitt Craft Brew Club. During its inaugural semester, the club had about 20 members, Boland said, and brewed 3 batches of beer. The club met once a week to discuss beer and the brewing process, but participation in weekly meetings soon waned. The club, while currently active, doesn’t hold regular meetings or have any plans to brew. Boland looks to change that this coming fall.

“The vision is to not only brew but also to have outings, visit breweries, have pairing dinners and hold tastings.” Boland explained.

Even though he founded a club dedicated to beer, Boland said he rejects the term ‘beer snob.’

“The term ‘beer snob’ gets tossed around too much. If I’m a ‘beer snob’ for caring about what I consume and how it tastes, then yeah, but I certainly don’t judge anyone for drinking [non-craft] beers,” Boland said.

The goal of the club, Boland said, is to share knowledge of beer and encourage drinkers to enjoy their beer. Boland said he hopes to revitalize the club in the fall.

“Everyone has access to beer, but not many people know about the process,” Boland said.

That process can get pricey, according to Kopp.

“The first time I brewed, it cost me probably $150 to buy everything,” Kopp said.

First, he purchased a kettle, which he uses to boil water, a necessary step in any homebrewing operation.

There are few repeated expenses involved in homebrewing. Since he has all the equipment he needs, the only supplies he has to buy to brew a new batch of beer are yeast, hops and grains, Kopp said.

“I actually made a heat exchanger to cool my beer from near-boiling to about 65 degrees, and that incorporated all my chemical engineering classes,” Kopp said, noting that his homemade device is much cheaper than a similar off-the-shelf gadget but works just as well.

A vessel called a mash tun is his second necessary piece of equipment. In this large, insulated container, Kopp mashes his chosen grains — usually barley, he says, sometimes with other grains such as wheat — in hot water, creating a sugary syrup called wort.

Kopp transfers the wort to the third major piece of equipment, a plastic jug called a carboy, cooling it in the process. After adding yeast to the wort, he stores the carboy in a cool room at between 55 and 75 degrees Fahrenheit. As the mixture sits, the yeast causes the syrup to ferment and become alcoholic, at which point it becomes beer.

While Kopp takes the opportunity to brew whenever he visits his home in St. Marys, he also uses his apartment on Ward Street in Oakland as a workshop.

“I don’t use an open flame or anything,” Kopp was careful to mention. “I just use the stove.”

The process of developing a new beer recipe can take longer than the brewing process itself.

“First, you have to decide what you want. You want your beer to be similar in style [to existing beers], but you also want it to be unique,” Kopp said.

His first attempts at brewing were step-by-step imitations of existing recipes.

“That’s the biggest thing the brewmaster [at Pittsburgh Brewing Company] taught me, how to create my own beer,” Kopp said, referring to his mentor at his co-op job.

His next step is to research grains and to choose one grain, or a mixture of several grains, on which to base his beer.

For Kopp, the final part of the planning process is to decide which flavors to add and to make sure that each flavor blends well with the whole brew. This process can involve a series of exact calculations, Kopp says, in order to get the flavor just right.

“When I did my pumpkin dunkelweizen, I had to add half a can of pumpkin to get just a subtle flavor. Then you have to add your nutmeg and your cinnamon and all your other flavors,” Kopp said.

Kopp plans to continue brewing in the future, but he hopes to move beyond a simple homebrewing operation once he leaves Pitt. He wants to work for City Brewing when he graduates, he said.

“I definitely want to get into brewing and keep home-brewing as a hobby,” Kopp said. “Maybe when I retire, I can start up my own brewery. That’s one of my dreams.”