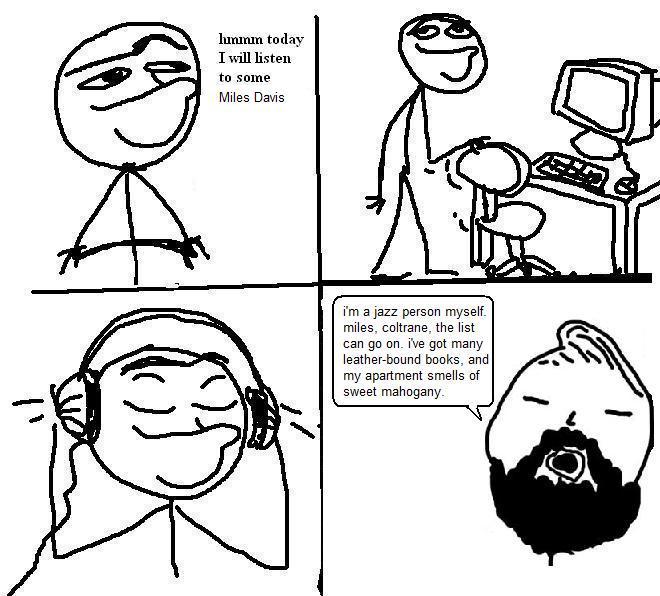 Comic illustrating the pretentious attitude of the average /mu/ user

Described by Urban Dictionary as “a place of sheer genius and utter stupidity,” 4chan — the birthplace of memes — is known mostly to the few who already prowl and post anonymously on the site’s various imageboards.

4chan is home to nearly 70 boards devoted to topics ranging from manga and Pokémon to political discussion and pornography and welcomes 18 million monthly users, according to founder Christopher Poole back in 2011. But the site’s most worthwhile subsection is /mu/, the board devoted to all things music related — a thriving, living piece of entertaining and provocative internet counterculture.

/mu/’s page consists of roughly 150 threads at a time, where any person connected to the internet can start a new one. The first one is a fixed greeting picturing a cartoon man with a shotgun, modified with a shirt of the optical illusion on the cover of Animal Collective’s “Merriweather Post Pavilion” and the potato head from Neutral Milk Hotel’s “In the Aeroplane Over the Sea.”

These two albums — along with My Bloody Valentine’s “Loveless,” King Crimson’s “In the Court of the Crimson King” and Madvillain’s “Madvillainy,” among others — are considered /mu/core, though it is often debated. This means the community frequently discusses these albums, largely due to their widespread approval by users. The latter examples, for instance, are on the whole seen as the pinnacles of their respective genres — shoegaze, progressive rock and hip-hop.

Discussion ranges from K-pop to metal to classical, and finding niche genres and fan bases is one of the keener pleasures of visiting /mu/.

The overall attitude of the average user, given the loose posting rules and anonymity, is occasionally riddled with irony, sarcasm, condescension and general political incorrectness. The board’s creative insults and invented internet vernacular practically deserve their own article. But once you are able to separate the “bait,” or purposefully outlandish statements, from useful and often brutally honest exchanges between persnickety strangers, /mu/ becomes an endlessly engaging format for a dialogue about music.

Between the complicated, meme-fueled jests and users calling each other out on disagreeable opinions — whether they’re genuine or not — the Wild West of the web is reliably amusing. Meanwhile, the many moments of insightful candor can affirm or challenge your own musical tastes. Though the appeal of /mu/ to the fun-seeking internet user is in the insults and jokes, a vast majority of users are there to share their interests with similar minds. Because the average user is a self-declared music aficionado, this leads to the discovery of great music you would never have found otherwise.

Bizarre subgenres like witch house and vaporwave contain their own newly established traditions and notable albums, despite having only been around for a few years. There are threads for more general genres, but even the ones with small Wikipedia pages get their time in the sun on /mu/. Users can also recommend albums and receive recommendations in return in related threads — usually these involve charts that outline a person’s favorite albums.

Unlike Reddit — a site that, like Pitchfork, is often at the butt of jokes — in which users can upvote or downvote posts, threads exist chronologically and only for seven days in the archive. Most threads, even the popular ones, only exist on the main catalog for 24 hours — once a thread ceases to have replies, it is closed and slowly moves down the catalogue until it is finally archived.

As the truly committed users are stuck up on their high horse, each anonymous voice declares itself to be true and each person can call out other users by tagging posts in their own. With no way to bury the unpopular thoughts or propagate any one view, the cumulative opinions on /mu/ are very much democratic. The most “right” opinion is usually the one most agreed upon.

Sure, users can be antagonistic toward one another in disagreement, but usually the users getting flack for their comments are the ones who, according to internet decorum, deserve it. They are the outright contrarians, clueless proletarians and the hyper-pretentious.

The stream of content weaving from jests to discernments end up being the funniest and most informative threads — when one has reached upward of 150 comments, you’re almost certainly in for something good.

A thread in which two sides of a topic are debated is something like living art. But as an observer, finding the few declarations that echo your own thoughts can be as emotionally fulfilling as it is aggravating when a favorite of yours has been dragged through the dirt.

Save for perhaps “Loveless” and “In the Court of the Crimson King,” the most universally praised albums are often subject to the most debate. The biggest paradox of /mu/ is that no artist or album can be celebrated without backlash, and likewise no music can be perpetually hated without a few defenders.

Take Tame Impala’s “Lonerism,” Kevin Parker’s sophomore psychedelic rock revival record, released in 2012 to universal acclaim and hailed by critics as one of the best albums of the decade so far. Following last year’s “Currents,” a more pop-driven breakup record that earned Parker further mainstream appeal, debate over the previous LP has become heated to the point that threads about the album appear daily. Many call “Lonerism” a modern classic. Others claim its aim towards drug-induced listening and homage to a bygone era of comfortable, Beatles-esque music make the album conceptually derivative.

Whereas music review sites like Pitchfork deliver open and shut cases by letting reviewers stamp their reviews with a definitive score out of 10, /mu/, for all of its shouting, is far more open-minded. Free from catering to any sort of hipster crowd or independent music scene — like Youtube music reviewer Anthony Fantano and critic Piero Scaruffi, both of whom are discussed regularly — the ideology of /mu/ is constantly morphing and nothing is beyond the realm of discussion.

The formats for user interaction are plentiful and creative. For instance, some threads are for arranging pictures into three boxes, the first showing the album listened to, followed by visuals on what the listener expected and ultimately what they got. These are funny for illuminating the way album art can influence what we expect from albums.

Though the population may have too much favor for idiosyncratic acts like Grimes and Death Grips, /mu/, in terms of authentic, enthusiastic cultural conversation, is a valuable alternative to the more self-important posturing of typical music criticism.

Let the people speak. They’re who the music is for anyway.