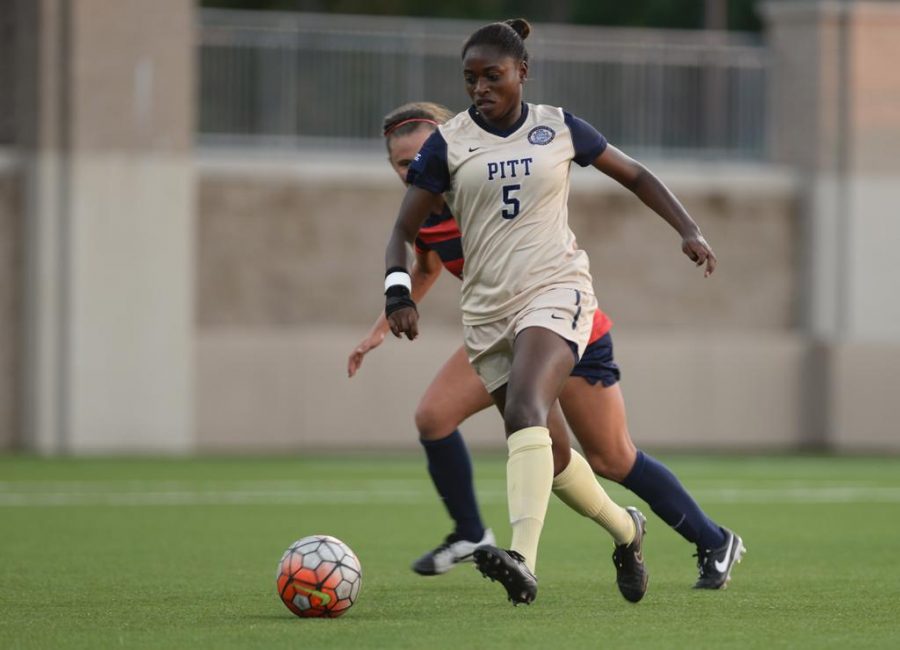 Junior Taylor Pryce and the Panthers had to settle for a season-opening draw at Michigan Friday night. | Meghan Sunners / Senior Staff Photographer

The Pitt women’s soccer team nearly pulled off a huge upset Friday night, but settled for a season-opening draw instead.

After 90 minutes of regulation and two 10-minute overtime periods, the Panthers’ first regular season game of 2016 ended in a 2-2 draw against the Michigan Wolverines in Ann Arbor, Michigan.

“I’m really proud of the team for them to set a precedent of how hard we’re going to work,” Pitt head coach Greg Miller said in a press release. “I’m a little disappointed that we couldn’t come away with the win, but … at the end of the day, we’re very content with a tie against that Michigan team on the road in our first game of the season.”

Michigan got the scoring started in the 22nd minute when midfielder Reilly Martin nailed a 45-yard free kick over the head of Pitt senior goalie Taylor Francis. 12 minutes later, the Panthers evened things up.

First-year forward Alex Wright tallied Pitt’s first goal of the 2016 season and the first of her career in the 34th minute, beating Michigan goalie Megan Hinz from the left side of the box. Sophomore defender Bri Shingary and sophomore forward Sarah Krause assisted on the goal.

The teams remained in a 1-1 deadlock for the rest of the first half and much of the second half. Then, with just over five minutes left in regulation, the Panthers struck again.

This time it was sophomore defender Alli Higgs, who bounced a free kick past Hinz from 35 yards out in the 85th minute to give Pitt a 2-1 lead and register her first goal as a Panther.

With time winding down, the Panthers desperately tried to hang on to their one-goal lead as the Wolverines made one last push to force overtime.

Michigan’s offensive onslaught worked, as midfielder Ani Sarkisian found a loose ball in the box after a corner kick and put it past Francis in the 89th minute to tie the game, 2-2. 90 minutes were not enough to decide this one, so the teams went to overtime.

Pitt senior defender Siobhan McDonough had an opportunity to finish it late in the first overtime period, but the captain’s shot in the 98th minute rang off the crossbar. A follow-up save by Hinz on Pitt junior Taylor Pryce’s header kept the game tied.

In the second overtime period, Francis was the one forced to make the plays in goal to keep her team alive, coming up with back-to-back saves in the 113th and 114th minute. She then denied one last Michigan shot attempt in the final minute to preserve the draw, finishing the game with seven saves.

“We had a couple of really good chances in overtime, but unfortunately couldn’t capitalize on them,” Miller said in the release.

The Panthers return home to take on city rival Duquesne in the 2016 home opener at Ambrose Urbanic Field Sunday, Aug. 21, at 6 p.m.