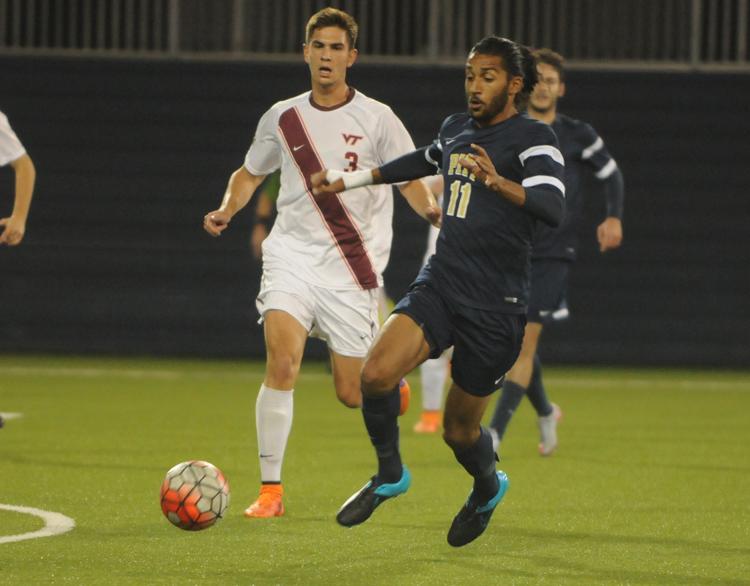 On an uncharacteristically temperate night in late August, 733 fans packed the stands at Ambrose Urbanic Field to catch a glimpse of Jay Vidovich’s first game as head coach of the Pitt men’s soccer team.

The Panthers hosted the Detroit Titans Friday night in their regular season opener, battling to a 0-0 draw in Vidovich’s debut. A two-time NSCAA National Coach of the Year and five-time ACC Coach of the Year at Wake Forest University, Vidovich took over as Pitt’s head coach after one year coaching the Portland Timbers 2 in the United Soccer League.

In his first game coaching the Panthers, Vidovich came away both pleased with his team’s effort and impressed by their opponents’ performance.

“I think the team that came in here was ready to fight and claw for anything they could find and they did a great job at it,” Vidovich said. “I think that was a great challenge for us.”

Pitt got off to a solid start, pushing the ball into Detroit’s territory early and securing a pair of corner kicks.

First-year forward Josh Coan took both corner attempts, but the Panthers couldn’t convert them into scores, and a header by first-year midfielder Luca Mellor went wide of the net.

“I think we did a great job creating chances, we were just missing that final push,” Coan said. “I think it was a little bit of a sneak peek of what we’re capable of doing and it’s unlucky we didn’t get one in there.”

For the most part, Pitt’s defense was successful in keeping the ball out of the defensive zone and away from goalkeeper Mikal Outcalt. But when the Titans broke through the zone, Outcalt was ready.

First, the redshirt freshman blocked a shot that resulted in a corner kick for Detroit in the 35th minute, then he caught a shot attempt by Detroit forward Tyler Moorman two minutes later.

“The place was packed. The energy was high. A lot of new guys played a role,” Outcalt said. “I think we showed a lot of people that it’s a different team this year and we’re looking to make some stuff happen.”

The Panthers had a strong first half on offense, outshooting the Titans 8-5, but the game remained scoreless.

While Pitt carried the advantage in the first half, the second half seemed like anyone’s game. That is, until the Panthers found a second wind in the late moments of regulation.

Referees assessed a yellow card to Detroit defender Garret Weaver in the 86th minute, giving Mellor an opportunity for a free kick. He sent the kick over the net, the high ball wedging itself between two fences, but the crowd sensed a breakthrough.

Mellor had another chance to give the Panthers a late lead two minutes later, but again his shot was too high. The 90th minute passed without a goal, and the teams faced off in two sudden-death overtime periods.

The first overtime period matched the tone of the second half of the game. Both teams seemed more concerned with not allowing the game-winning goal rather than trying to score one, with each team making only one shot on goal.

While Pitt was able to keep the ball in Detroit’s territory for the majority of the first overtime period, Detroit’s relentless defense provided hardly any openings to get the ball on goal.

“We saw that just because you’re working hard, it doesn’t guarantee a win,” Vidovich said. “I think the moral of the story is it’s harder to create than it is to destroy.”

The Panthers next will host Howard University at Ambrose Urbanic Field Sunday, Aug. 28, at 7 p.m.