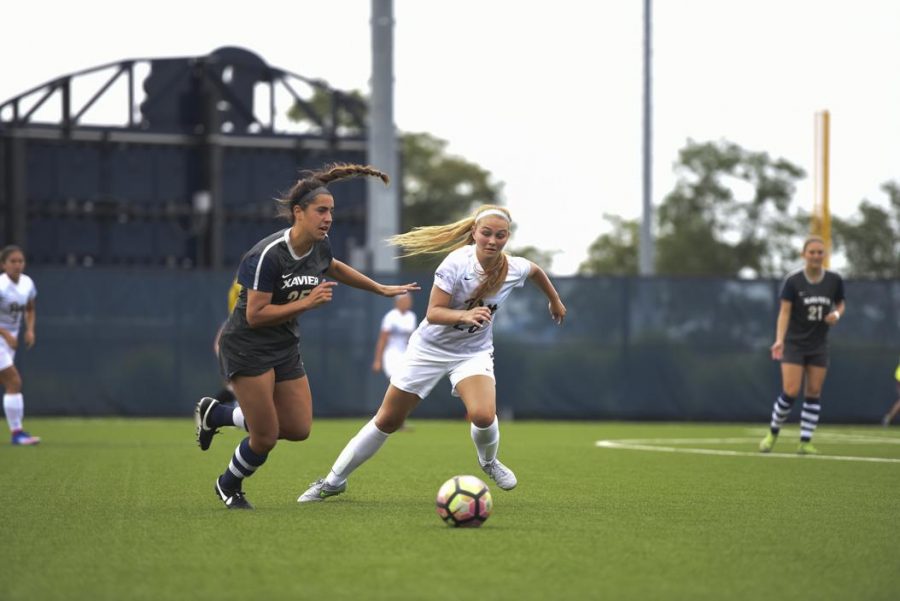 After being shut out in its first two home games of the regular season, the Pitt women’s soccer team put numbers on the scoreboard immediately in its Sunday afternoon game against the Xavier Musketeers.

The Panthers (1-2-1) eventually defeated the Xavier Musketeers (2-1-1) by a 2-1 score for their first win of 2016. It was a much-needed victory after dropping two straight games following a season-opening draw at Michigan.

“I think [the win is] a relief. We didn’t play nearly our best soccer today,” Pitt head coach Greg Miller said after the game. “But I’m glad we were able to get a couple of first half goals to give us a little bit of a cushion, and then we just had to grind through it.”

Senior goalkeeper Taylor Francis set the tone early for Pitt with a tough save just over a minute into the game. The crucial stop ignited the Panthers with the spark they needed on offense — something that wasn’t tangible in their last two games.

Sophomore defender Bri Shingary sent a through ball deep into the Xavier zone, which sophomore forward Sarah Krause was able to chase down and keep inbounds. Krause’s hustling play set up first-year forward Alex Wright with a golden scoring opportunity right in front of the net.

Wright delivered, easily beating Musketeers goalkeeper Rachel Piccus to give Pitt the 1-0 advantage in the fourth minute of the game.

“At first I was kind of hesitant, because I didn’t know if it was still in or not and Sarah was on the ground,” Wright said. “It went right past the defender and I was like, ‘Wow, this is coming right to me.’ I just didn’t think about it and hit it with my left foot and it went over [the goalie’s] head.”

After a two-minute water break in the 20th minute to keep players hydrated in the sweltering 84-degree heat –– which felt like 102 degrees according to AccuWeather –– the Panthers created more offense with help from a timely substitution.

Perez had a chance to add to Pitt’s lead right in front of the net, but Piccus made the save. Moments later, Wright put the ensuing rebound past Xavier’s senior keeper for her second goal of the game.

“We work on framing the goal a lot, so I saw [Perez] beat the two center backs and I was just ready to be there,” Wright said. “She had a great shot which made the keeper make a save, and I got the rebound.”

The Panthers took a commanding 2-0 lead into the second half, but needed to hustle to maintain it.

A swift through ball gave Musketeers sophomore forward Samantha Dewey the ball inside the box with only one defender between her and the goal. Dewey used a slick move to get past the defender and beat Francis to the top left corner, putting Xavier on the board in the 60th minute.

While clinging to a one-goal lead, the Panthers kept the pressure on the Musketeers rather than sitting back and playing defense.

In the 85th minute, the Musketeers regained possession of the ball and made one final push toward Pitt’s zone. They set up one last shot attempt from just outside the box, but Francis made a sprawling save to deny Xavier’s desperate attempt to tie the game.

Francis said she had one thing on her mind with the ball screaming toward the corner of the net.

“It was honestly … just get the ball, this can’t go in, we have to win this game,” Francis said. “So, really [I] just did what I’ve been training for my whole entire life.”

The Panthers will travel to Santa Barbara, California, to begin a three-game road trip at UC Santa Barbara Friday, Sept. 2, at 10 p.m.