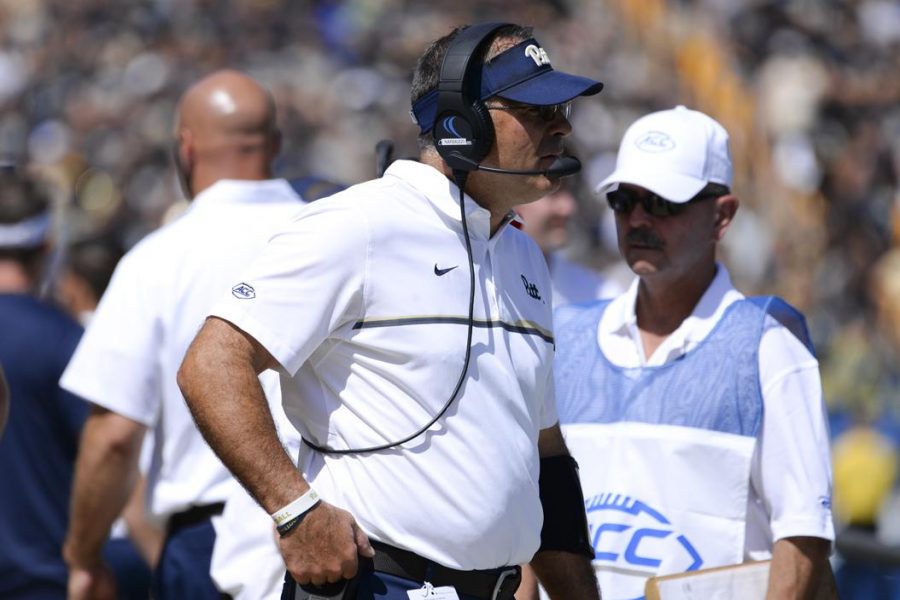 In the weeks leading up to Pitt football’s season opener against Villanova, head coach Pat Narduzzi didn’t want to talk about Penn State.

This week, he’s talking but is still tight-lipped. He’s adamant, though, that his players and staff remain totally silent ahead of Saturday’s rivalry game.

At Monday’s press conference at the UPMC Rooney Sports Complex, Narduzzi announced that there will be no media access to the players in the week leading up to the Panthers’ most anticipated matchup of the year. Only he will speak to the media during his weekly teleconference call at 12:10 p.m. Wednesday and his final press briefing at 1 p.m. Thursday.

Traditionally, members of the media can request one-on-one interviews with players and attend Tuesday and Wednesday practices during a select half-hour window. Neither will happen this week, Narduzzi said.

Narduzzi’s approach differs starkly from his opponent’s. Penn State has already said it will be allowing more access to players and coaches this week, including an assistant coach and eight players.

At the time of the press conference, the players were not notified of their coach’s decision, but Narduzzi said it would be mentioned at the start of Tuesday’s practice. This is the first time Narduzzi has blocked media access since becoming head coach last year.

Narduzzi stated that this decision will help the players focus on the game and has nothing to do with them creating bulletin board material.

“Every minute [of preparation] is important, and that’s an attitude for our football team right now to be able to do that,” said Narduzzi.

Despite his uncharacteristic silence, Narduzzi was willing to talk about the team’s performance against Villanova Saturday as well as how the team is preparing for Penn State this weekend.

The main concern from last week was not a lack of focus but execution. Even with the return of running back James Conner, the team was unable to run the football aggressively enough, Narduzzi said.

“They packed a lot of guys in the box. We don’t really care if you pack them in the box — we still want to be able to run the ball against you,” Narduzzi said. “It’s just a matter of execution.”

The defense was largely able to keep Villanova from scoring, but this week, the Panthers will face a much tougher challenge with the up-tempo offense of Penn State. One such challenge will include stopping powerhouse Saquon Barkley — possibly the best tailback in the country, according to Narduzzi.

Regardless of whether sophomore defensive end Dewayne Hendrix –– who was carted off the field with an apparent foot injury in Saturday’s opener –– takes the field this week or is replaced by junior Rori Blair, Penn State will challenge Pitt on both fronts.

“I know everybody in the country is going to be watching. There is going to be a lot of eyes on the city of Pittsburgh and the state of Pennsylvania. That is what makes it different,” Narduzzi said.