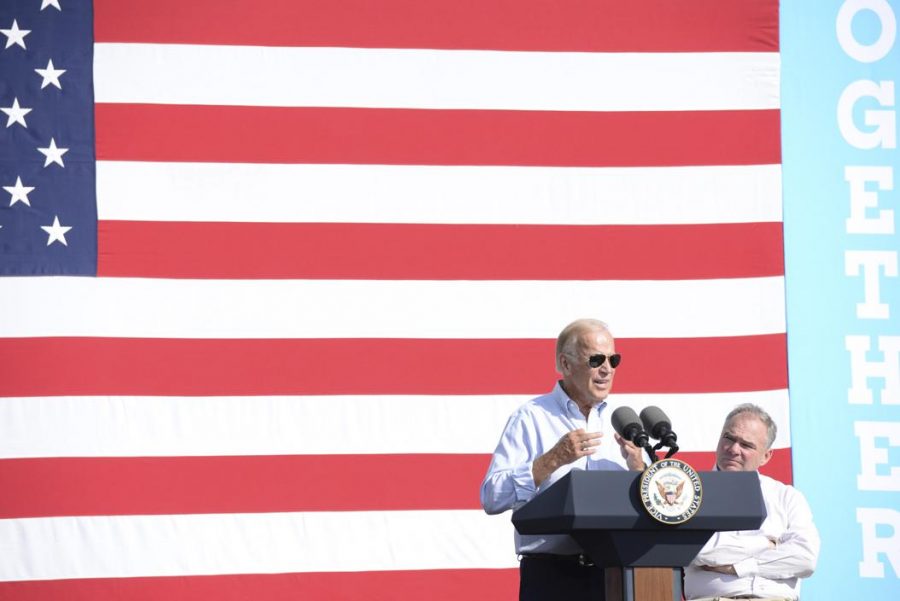 By Brad Smertz / For the Pitt News

During his senior year of high school, he said, Pitt offered him a football scholarship, sparking his affection for the University and the Steel City.

Although he did not accept the offer, Biden came back to the city on Monday to speak at the Labor Day Parade alongside Democratic vice presidential candidate Tim Kaine.

As ‘70s music blared from a speaker and groups of people cooked out by their cars, Biden and Kaine spoke downtown about the unfair economic burden working class Americans and unions must bear and how the Democratic Party could help the middle class.

Randi Weingarten, president of the American Federation of Teachers, and Rick Bloomingdale, president of the Pennsylvania AFL-CIO, began the speeches at 9 a.m. Monday at the intersection of Liberty Avenue and 11th Street. Leo Gerard, international president of United Steelworkers, spoke to the crowd of about 700 people about the power of labor and then introduced Tim Kaine, Hillary Clinton’s running mate, and Vice President Joe Biden.

“For six years, Hillary Clinton did nothing but help us,” Gerard said. “Tim Kaine shares these ideals.”

Kaine, currently a senator in Virginia, is originally from Minnesota. He started his political career in Virginia as a member of the city council in Richmond before becoming mayor of Richmond in 1998 and then governor of Virginia in 2005. Recently, he has made headlines for comparing Donald Trump’s insinuation that Russia should hack Clinton’s emails to the Watergate scandal.

In a recent stop to Bethlehem, Pennsylvania, Kaine talked about immigration, Trump’s visit with the Mexican president and answered questions regarding finances, health and foreign relations. On Monday, he focused on promoting the small business mentality as well as calling for equal pay for equal work and affordable college tuition.

“Affordable college, debt free college … this is what drives the most skilled workforce on earth,” Kaine said.

Since the close of the Democratic National Convention in July, Clinton has maintained a solid lead over Republican nominee Donald Trump in Pennsylvania. A recent CBS/YouGov poll placed Clinton eight points ahead of Trump.

At the parade, the streets immediately surrounding the main stage were cluttered with union workers and their families, dressed in matching T-shirts to represent their respective organizations. Many groups gathered around their cars for cookouts and to play music before making their way through security and toward the main stage.

Mohamed Rahim, who was at the rally and has been a supporter of Kaine since he ran for governor of Virginia, said he believes the Democratic Party is committed to promoting the American labor force. Rahim, who lives downtown, said he’s not convinced Trump shares this commitment. Rahim agreed with Kaine’s statement that for Trump, “it’s about looking out for number one and walking over everybody else.”

“Democrats are looking to keep jobs in the country,” Rahim said. “Trump is not a politician — he’s a businessman.”

Kaine, in his speech, couldn’t have agreed more.

“It’s about the moms and dads, all across the country, whose pride is stripped from them … when they can’t afford to buy the basic things,” Biden said, accenting his focus on the working American by setting a casual atmosphere and taking off his sport coat and sunglasses while he spoke.

“Unions have been destroyed by politicians all around the country,” Tuite said.

But Biden addressed that matter, beginning by recognizing that the United Steelworkers gave him his first endorsement when he was running for U.S. Senate as a representative of Delaware in 1973. He reminisced upon a meeting with USW President I.W. Abel in which Abel told him he didn’t have a chance but endorsed him anyway. Biden ended up winning the race.

Biden then went on to note how past economic downfalls have been unfairly pinned on the economic repercussions of unionized labor.

“The reason why we got in trouble was the greed of Wall Street,” Biden told the crowd. “They pinned it on you guys.”

Biden did not take a political side on the matter, as he faulted both Democrats and Republicans for the lack of advancement in the realm of unionized labor.

Gary Spindl, a Squirrel Hill resident, was pleased with the lack of political bias.

“I think it was honest and fair how he blamed both parties for union problems,” Spindl said.

Biden also mentioned that proactive unionized labor held economic benefits to all workers, unionized or not. He highlighted his belief in the working class with a word of encouragement for the American labor force.

“We never bend, we never break when we are confronted with crisis,” Biden said. “It’s never been a good bet to bet against the American people.”