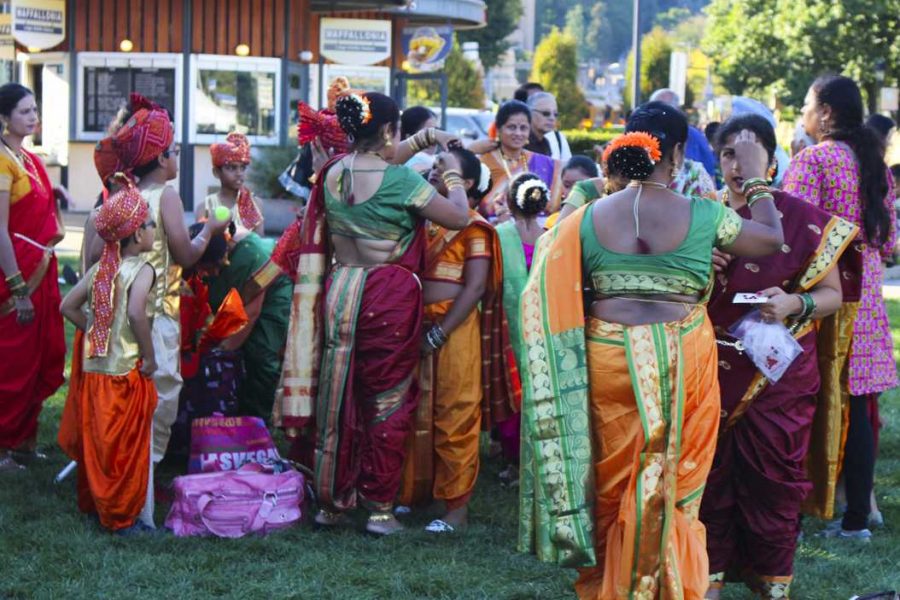 By Annabelle Hanflig and Salina Pressimone / The Pitt News Staff

When Dalel Khalil, a Pitt alum and Syrian-American, visited Pittsburgh’s annual Folk Festival five years ago, she noticed a lack of Syrian representation.

So, she decided to set up her own culture and cuisine booth.

A lifetime Oakland resident, Khalil grew up on Atwood Street and helped her family act as the “Ellis Island for all of the Syrian community” that has come to Pittsburgh since the 1960s and 70s, she said. Now, she continues that tradition partly through the annual Folk Festival.

“We have grown up [in Oakland] with this multicultural community. Pittsburgh is based and built on that. When I was growing up … it was a very ethnic neighborhood mixed in with the students,” Khalil said. “We thought this would be a great opportunity to show Pittsburghers how beautiful our culture is, and we are that foundation in this city.”

Often used for tanning on sunny days, Schenley Plaza transformed into a vibrant representation this weekend of the international communities residing in Pittsburgh neighborhoods from Oakland to East Hills.

Saturday and Sunday’s Folk Festival saw thousands cross Forbes Avenue and Bigelow Boulevard to enjoy international food, music and vendors from more than 30 Pittsburgh-based cultural organizations such as the Organization of Chinese Americans, the Scandinavian Society, the Japan-America Society of Pennsylvania, and the Carpatho-Rusyn Society of Pennsylvania.

From the varied artistic performances to the myriad of delicious foods ranging from vegetable spring rolls, to curry chicken, to meat and vegetable empanadas, the event celebrated its 60th anniversary with unity, cultural appreciation and strong attendance of more than 1,000 guests per day.

One of the festival’s most popular attractions was the food tent, where one could walk in and immediately smell Syrian falafels cooking, the Lebanese stuffed grape leaves simmering and the sauerkraut and spaetzle being dished out in the German booth. People soon started dropping out of other lines and into the crowd of those waiting for the variety of dishes being served under the massive carnival tent.

Many of the same countries selling food also represented their heritage with craft, clothing and cultural demonstrations, as well as their presence in Pittsburgh, at small booths lining the perimeter of the plaza. Families and students could learn about Norwegian Constitution Day at the Scandinavian Society tent one minute and participate in the Taiko drumming activities offered by the Organization of Chinese Americans the next.

While the food and demonstrations were plentiful, what drew festival-goers most was the vivid collection of song and dance performed by each ethnic group. With 15 minutes for each performance, over 18 different ethnic groups showcased the best of their nations’ performing arts cultures.

Representing Argentina, PGH Tango Connection danced for a full hour on Sunday with an assortment of tango routines. The performances varied from large group presentations to individual couples, but all executed intense, skillful variations of the classic dance. Unbeknownst to most of the crowd surrounding the dance troupe, the routines were improvised. The swift kicks and fast footwork were made up in the moment by the dancers, according to the group’s organizer, David LaRose.

LaRose, a Pittsburgh native and PGH Tango Connection member, led the group as they tangoed throughout the day. LaRose’s passion for Argentinian culture shined as he gave short anecdotes before each performance about the origin of the tango and the other countries from where each performance drew inspiration.

“It’s a really unusual dance in that it’s all about communication,” said LaRose, adding that he finds the intricate dance of tango and the burgeoning city of Pittsburgh go hand-in-hand. “Pittsburgh is a growing city with a growing arts scene. It’s important to have a bunch of dance and music. [This festival] is part of what makes a city great.”

Two particular PGH Tango Connection members brought their love of tango to the stage from across the Atlantic. A husband and wife performing in the tango exhibition recently immigrated to Pittsburgh from Turkey and found the group in an attempt to get to know the area.

Between the shows, festival-goers visited the numerous merchandise and activity tents where they could receive Indian henna tattoos, make an Italian pasta necklaces and paint Ukrainian Pysanka eggs.

Cessy Portuguez, owner of Peruvian clothing and jewelry shop Paititi Art and Hand Crafts, conveyed her appreciation of cultural diversity through her vibrant and colorful scarves, Aztec patterned crossbody bags, hand-stitched belts and various pieces of elaborate jewelry, each consisting of a different stone and metal. She explained that the products displayed in her tent were made through adapted Incan techniques on how to make jewelry and clothes from natural materials such as wood, crystals, gems, and organic cotton.

Along with her co-owner, she expressed that they “would like to share that with the American people” so they “can come and appreciate what we’re bringing to them.”

For the past six decades, the Folk Festival has been successful in establishing an atmosphere of respect, interest, encouragement and acknowledgement of international cultures. New countries and cultures join each year.

Festival organizer Christina Hlutkowsky had been helping out at the festival since she was 10-years-old, but now, 13 years later, runs the entire production. Hlutkowsky said she loves running the festival but finds a larger purpose in the way it makes people feel at home.

“[With the festival,] it’s really great to show new immigrants coming into Pittsburgh that we accept, we support, we love their culture,” she said, adding her admiration for how the festival acts as “one big family” in a city that is “so colorful and vibrant.”