Sandusky saga has no place in Pitt-Penn State rivalry 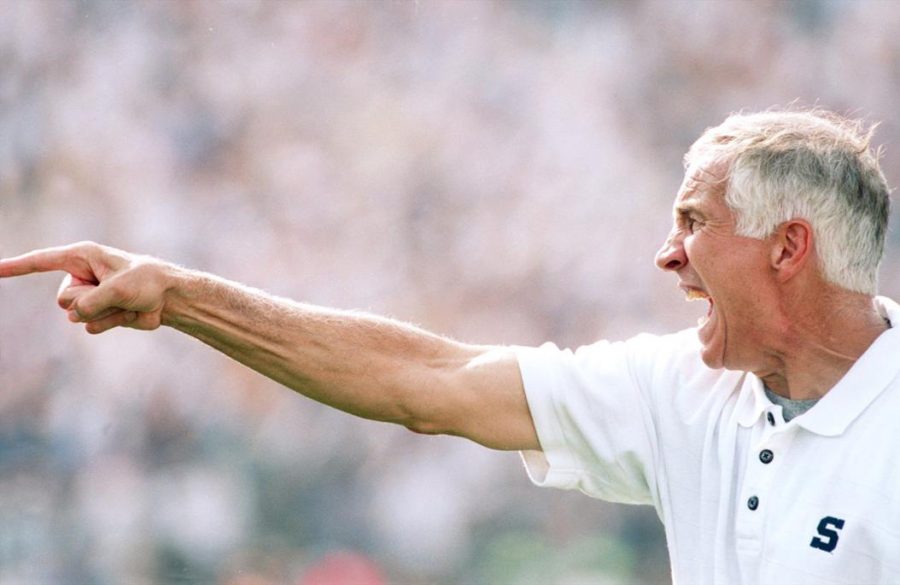 Bringing up Jerry Sandusky in the renewal of the Pitt-Penn State rivalry will do Pitt fans no good. TNS

“Hilarious. I’ve got to get that on a T-shirt. Or a sign. Or something.”

This is the unhinged thought process that select members of the Pitt fan base will likely go through, or have already gone through, prior to the Panthers’ long-awaited clash with their in-state rival.

The slogans refer to Jerry Sandusky, a former Penn State defensive coordinator who was convicted of sexually assaulting multiple 8- to 10-year-old boys during his time at Penn State. The 72 year-old will spend what is likely the rest of his life in jail. Subsequently, former and longtime Penn State Head Coach Joe Paterno was accused of ignoring the accusations against Sandusky and thus allowing the abuse to continue.

But Pitt fans who use the scandal to smack talk Penn State are falling into the same trap of dismissing sexual assault that doomed the previous regime of administrators at Penn State.

Most human beings should understand that the nosebleeds or the student section at Heinz Field during a football game isn’t the appropriate venue to start a discourse on the prioritization of athletics over people at state schools.

It’s more than disheartening to see the hashtags and photoshops and to hear the callous jokes and chants. People are belittling the children and families that Sandusky, and by proxy the administration at Penn State, have already hurt.

Imagine a sexual assault survivor walking Downtown, or watching television, and hearing a Pitt fan gleefully chant that former Penn State coach Joe Paterno knew and ignored sexual abuse committed by a member of his coaching staff. Imagine how a mom would feel, scrolling through social media to see Sandusky’s grinning smile cropped into a photo of a Penn State locker room. There’s nothing funny about it, and it won’t create any productive dialogue.

We as a society should still be heavily invested in aiding the victims of Sandusky’s predatory acts, as well as determining exactly how a major university like Penn State could turn a blind eye to it for so long.

But that’s not what any of this nonsense is about. I firmly doubt that any actual empathy or concern for the victims of abuse is the motivation behind the mocking signs. Instead, the design draws from some sort of warped insecurity that amounts to nothing more than the desire to prove that Pitt is better than Penn State, and only that.

Those who are using the Sandusky case to trash talk a rival football team are using the assault and trauma of a large group of children to win a barstool argument — just to say the team of football players that wear “Pitt” on their jerseys are good and the players in the white and navy are bad.

The jokes are not only offensive and dismissive — they are unnecessary. There is plenty of fuel for the anti-Penn State fire that doesn’t involve invoking the Sandusky saga.

Pitt is a promising program, with a dynamic head coach in Pat Narduzzi, a blistering, young physical freak of a defensive back in Jordan Whitehead and perhaps the most inspirational story in all of college athletics in running back James Conner.

Meanwhile, Penn State is a program that has struggled to find an identity since Bill O’Brien left.

James Franklin seemingly ruined a blue-chip quarterback in Christian Hackenberg, and has the same amount of conference wins as Narduzzi despite having two years of head coaching experience under his belt instead of one.

Paterno won’t be roaming the sidelines, Sandusky won’t be dialing up blitzes. Tim Curley and Graham Spanier won’t greet the Nittany Lions in the locker room postgame. It’s a matchup between the 2016 Pittsburgh Panthers and the 2016 Nittany Lions.

If you believe the sexual abuse scandal is something that Penn State should be ashamed of — which it is — do something that will actually help survivors.

Instead of buying a crudely designed T-shirt with some antagonistic message on it — which is becoming a harder task, as backlash is causing some sites to stop offering products — donate to a charity that supports abuse victims. Go volunteer.

No one who’s been affected by Sandusky will be comforted or avenged by your gag tee or your #JoeKnew hashtag.

Go to the game. Boo Trace McSorley, yell obscenities, print out large-scale photos of that picture of James Franklin with tiger face paint. But the Pitt football program is better than child abuse jokes.

The fans should be too.