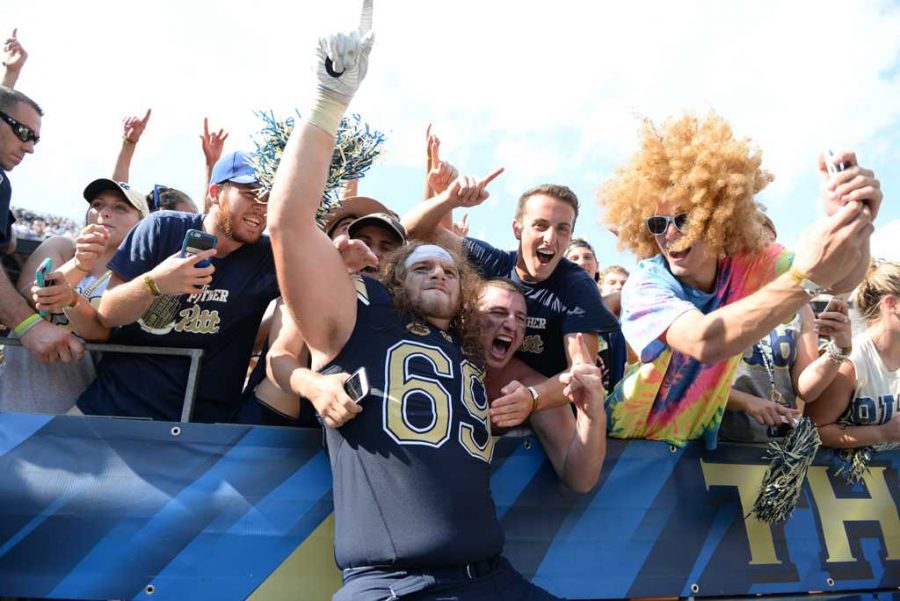 According to Pitt head coach Pat Narduzzi, Lewis has stayed late at practices this year, working on improving his ball skills, particularly on deep passes.

And in the biggest game and biggest moment of his Pitt career, all of that extra time paid off. Lewis hauled in Penn State quarterback Trace McSorley’s desperate 40-yard heave into the end zone with 1:15 remaining in the first Pitt-Penn State game in 16 years to seal the Panthers’ 42-39 win.

“As soon as I caught that ball, the crowd started erupting,” Lewis said. “I didn’t even know where I was, but my teammates were on me and I knew right there and then, it was over.”

Lewis’ interception sealed the fate of an instant classic of a game, as, after a late comeback, Pitt defeated the Nittany Lions 41-38 in a game that set a Pittsburgh sporting event attendance record with 69,983 fans in the stands.

Pitt began the game in shaky standing. Following a perfect punt by Penn State’s Blake Gillikin, the Panthers held the ball at their own 1-yard line, needing to march 99 yards to score the game’s first touchdown.

It was Pitt’s captain and superstar running back James Conner that helped Pitt escape. After a 2-yard sneak by quarterback Nathan Peterman, Conner took his first carry on second down and bolted 24 yards, breaking a tackle and looking very much like the player that won the 2014 ACC Player of the Year award.

Offensive coordinator Matt Canada levied an attack against the Nittany Lions that left the visitors reeling. Pitt utilized reverses to Conner and wide receiver Quadree Henderson to march down the field via numerous explosive runs.

Peterman said the 99 yard-drive was a tone setter.

“That was huge,” Peterman said. “I think it was a huge statement, especially for our guys and whole team, it fired everybody up.”

Pitt furthered its momentum with a big defensive play, as Ejuan Price recorded a strip-sack on McSorley. Two plays later, Peterman connected with Henderson for a seven-yard touchdown to give Pitt a 14-point lead.

Penn State got on the board with 2:42 left in the first quarter, as the Nittany Lions followed a 59-yard punt return by John Reid with a three-yard rushing touchdown by Saquon Barkley.

That seven-point gap didn’t last long, as a Scott Orndoff touchdown reception and another rushing touchdown by Aston gave the Panthers a 21-point lead.

Penn State would score on a one-yard rush by Barkley with 42 seconds left in the half though, and Pitt led 28-14 heading into the locker room.

The start of the second half was rocky for Pitt, as the Panthers went three and out on their first possession while picking up three penalties.

Soon after, McSorley connected with Barkley on a 40-yard touchdown pass, narrowing what was once a 21-point lead to seven.

“We have to find out why we couldn’t finish [the game] off faster,” Narduzzi said. “There are still a lot of things we have to improve.”

Pitt responded with an impressive drive, as the Panthers once again utilized their stable of running backs, with Darrin Hall and Qadree Ollison breaking off big gains before James Conner leapt over the goal line for a one-yard touchdown run.

The Lions had a chance to chip away again at the lead, as they followed up the Conner touchdown by gaining their way into Pitt territory. But on third down, defensive back Dennis Briggs forced a Barkley fumble, and Mike Caprara scooped it up.

Penn State continued to claw, though, as an incredible one-handed catch by wideout DeAndre Thompkins set up another one-yard touchdown run by Barkley, his fourth score of the game.

Safety Jordan Whitehead said tackling Barkley was among the toughest assignments of his career.

“Going back to high school we knew each other pretty well so during the game we were battling,” Whitehead said, “It was definitely one of the toughest battles I’ve had.”

On the following possession, Conner fumbled, giving Penn State the ball at the 11. But a third-down sack by linebacker Quintin Wirginis –– the first of his career –– prevented the Lions from tying the game up, as Penn State settled for a 38-yard field goal to cut the Pitt advantage to four with 12:04 remaining.

“For us to hold them to three points, that’s the game right there,” Narduzzi said.

Pitt was once again able to counter. On the ensuing kickoff, Henderson dipped and darted his way to the 10-yard line for an 84 yard return, although he was frustrated he didn’t find the end zone.

“My teammates were just excited that I could get the team into field position,” Henderson said. “I was mad at myself, though. I just did what I had to do to get down there.”

And just when it seemed like the drive had stalled, Peterman flipped a shovel pass to Conner on third and long, who found the end zone to give Pitt a 42-31 lead.

After the two schools traded punts, Penn State kept hammering, as Barkley scored his fifth touchdown of the game, decreasing the Pitt lead to 42-39 after the Nittany Lions converted the two-point conversion with five minutes remaining.

“We were never really nervous,” Lewis said. “We just knew we had to make a play.”

It appeared that Penn State was going to take the lead late in the fourth quarter, as McSorley lofted a perfect deep ball to DaeSean Hamilton with no one in front of him. But Hamilton dropped the pass, and Rori Blair sacked McSorley on the next play to give Penn State a fourth-and-16 situation with the game on the line.

Penn State was able to overcome the distance, as McSorley connected with Thompkins for a 34-yard pass. Two plays later, he tried to go for the lead and dialed up another deep ball against Lewis, who instead made the game-clinching interception.

Conner finished the game with 22 carries for 117 yards and four catches for 29 yards, with two total touchdowns. He said that the win staked Pitt’s claim as the class of Pennsylvania.

“It’s our state, and it’s a battle,” Conner said. “I’m just happy that we took it home today.”

The Panthers will travel for their first road game of the season next week, as they’ll make their way to Stillwater to take on the Oklahoma State Cowboys. Kickoff is set for 3:30 p.m, and ESPN will air the game.