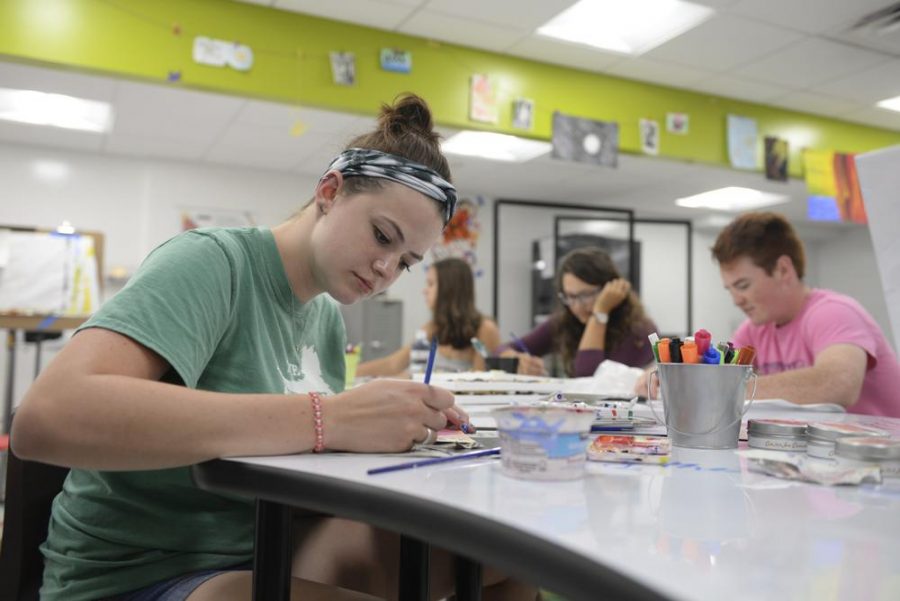 As Zi Xie looked at a pile of multi-colored Legos in Pitt’s new Center for Creativity, she couldn’t help but think beyond the assortment of miniature bricks and blocks.

“Is there a major where you can design bridges? Because that is what I would like to do,” said Xie, a first-year engineering student.

In the basement of the University Bookstore on Fifth Avenue — a space formerly used solely for selling textbooks — Pitt’s new Center for Creativity allows students to take free art classes, use equipment including pottery wheels, typewriters and word walls and jam out on pianos, guitars and a range of other instruments, all for free with the swipe of a Pitt ID.

The Center spans three interconnected rooms throughout the basement and shares the same hours of operation as the University Bookstore.

Everything the facility has to offer is available to beginners so they can develop their skills without the fear of failure, according to Jeanne Marie Laskas, the Center for Creativity’s director and author of the book “Concussion.”

“This is the place you can go and not have that barrier of being afraid to try something new because everyone there is trying new things,” said Laskas, who is also the director of Pitt’s Writing Program. “Our motto is ‘amateurs welcome.’”

The Center for Creativity debuted last spring but will inaugurate its first full academic year this semester. Laskas, Kit Ayers, an administrator for the Computing Services and Systems Development and English Department Chair Don Bialostosky, came up with the idea originally in 2011. Following last year’s Year of the Humanities, the three received the support necessary from Pitt Provost Patricia E. Beeson to launch the Center for Creativity.

The Center is open to all students, faculty and staff and welcomes the amateur, master and observer alike with a focus on collaboration. Yu Peihuang, a first-year engineering student, said she’s grateful for the opportunity to hone new skills.

“I never really passed my art classes since maybe second grade, but I can come here and do my crafts and not be graded, and it is much more enjoyable,” Peihuang said as she manipulated copper wire into a bracelet of interwoven threads complemented with green jewels.

The Center for Creativity has opened amidst a broader cultural movement often referred to as the “maker movement,” which promotes a DIY culture of independently engineered works. The maker movement often focuses on engineering and software development to produce new technologies, whereas the Center is more interested in promoting individualized, creatively-produced expression.

The Center provides students with the means to reach into engineering and technology by making 3-D pens and 3-D printers available as well as offering computers equipped with Adobe Creative Cloud software.

First-years Kelsey Kayton, a psychology major, and Anna Louchmanov, a biology major, bonded over their fascination with 3-D printing as Kayton watched Louchmanov designing and printing a 3-D model of a character from a game she enjoys. Kayton and Louchmanov didn’t even know each other until crossing paths in the Center.

“I saw that [Louchmanov] was making something, and I thought it looked really cool, so I decided I would stay and watch her print it,” said Kayton.

The collaboration-based approach has already benefited Teddy Tiwari, a first-year biology major, who has visited the Center for Creativity six times to utilize its pottery wheel. Tiwari’s also collaborated with other potters she’s met to discuss new ideas for her own projects.

“When you are at the University and you ever need help, you can exchange notes, which I feel is really helpful,” said Tiwari. “Now that I don’t have a teacher, it is up to my peers to offer help, and it is good to see other people’s styles and how they work.”

Another common theme amongst people who come to the Center is that it represents to them an opportunity to escape from the stress of school life.

“It is a big stress for us to have so many activities and homework, but I think this is a wonderful place,” said Peihuang, the bracelet creator. “Sometimes, doing these crafts helps me think about my studies in another way. You think of things in a new perspective when you are working on crafts.”

The Center isn’t meant to be a study space or an additional group work space where students can’t complete class assignments, according to Laskas. It’s just a place to create.

“It is the nature of what it means to be human,” reflected Laskas. “We make, we create — that is what humanity is certainly about.”