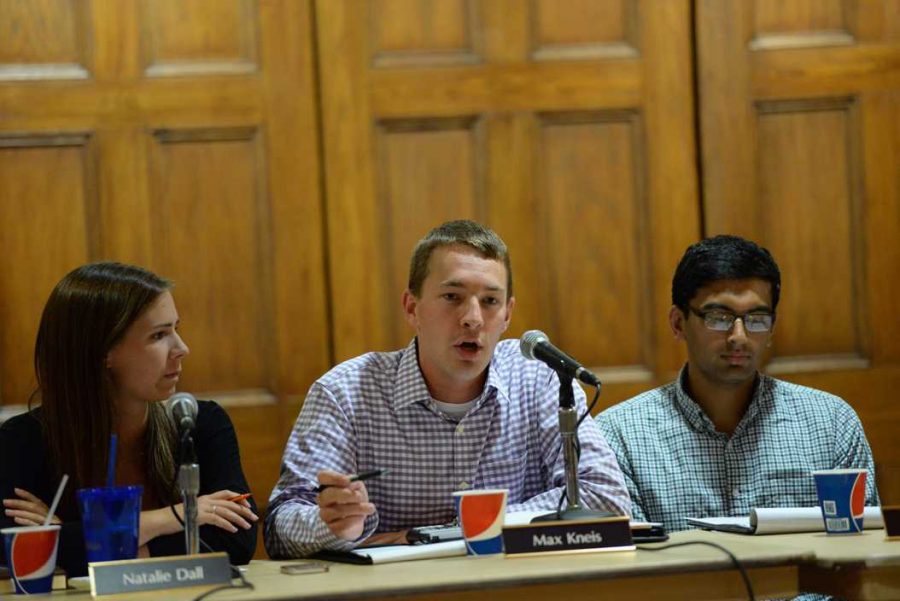 Student Government Board member Max Kneis is teaming up with students from the business school to bring financial literacy to Pitt students.

Kneis has been working for several weeks with Evan Turman, president of Alpha Kappa Psi, the business fraternity, and other organizations within the business school to organize a financial literacy conference.

The conference will bring professionals from the business and finance worlds to teach students about how to manage their money while in college and after they graduate.

The goal of the conference, which will be on Oct. 21, is to improve financial literacy, both in learning basics — such as how to handle debt and what credit means — as well as more extensive knowledge for after graduation, like how to understand a contract that a company offers a first-time employee.

“A lot of people say ‘I don’t like math or taxes. I don’t want to know about it,’” Kneis said. “But you can’t be ignorant about it — you have to pay your rent.”

The conference comes after months of planning, with discussions beginning last spring. After Turman realized financial literacy was an issue, Alpha Kappa Psi hosted a speaker for members to begin discussing financial literacy. The positive response convinced him to propose a wider scale event, which Turman and Kneis worked on alongside Associate Dean of the Katz Graduate School of Business Audrey Murrell.

The conference will host several speakers from the business field, including Dean Owrey, chief financial officer for University of Pittsburgh Medical Center Enterprises and Information Services Division, and Vic Bovalino, executive vice president of finance and operations at Surefire Restaurants Group. All the speakers bring real world experience, which Kneis and Turman hope will add to the value of the conference.

The Business School will pay for the daylong conference, which includes breakfast and lunch for attendees.

“What it came down to was relevance for students,” Turman said.

Turman and Kneis both want the conference to become an annual event at Pitt. This spring, Turman hopes to host other speakers for smaller events for students to delve deeper into topics of financial literacy. The goal of this year’s conference is merely to get the conversation started.

In other news, the Board expanded plans for a Women’s Empowerment Week, which it announced at last week’s meeting.

Board members Alyssa Laguerta and Sydney Harper are collaborating on creating an organization dedicated to empowering women through a mentorship program. As of right now, they are setting it up as a task force under SGB. Laguerta is unsure how the club will take shape in the future and whether it will remain under SGB or become its own entity.

Right now, Harper and Laguerta are working with Senior Vice Chancellor for Engagement, Chief of Staff Kathy Humphrey on drafting a constitution and attracting members.

The women’s empowerment group will take the form of a mentoring institution with older members helping guide first-year students and sophomores. Although it is primarily geared as a women’s group, Laguerta hopes it will be able to work with any other student organizations interested in empowerment as well.

“It’s all about collaboration,” Laguerta said. “We want to build solidarity.”

Ultimately, the group hopes to foster relationships among women at Pitt while helping them transition through school and into the workplace. Laguerta wants the group to encourage more women leaders to work together.

“We want to connect women leaders and empower other women to lead,” Laguerta said. “It will hopefully showcase strong women in the workforce.”

Also at Tuesday’s meeting, Board President Natalie Dall announced that student leaders from other state-affiliated schools will visit Pitt on Sept. 30 for the weekend as part of the Pennsylvania Association of State-Affiliated Students, an organization that brings student leaders together from the four state-affiliated schools in Pennsylvania. Penn State, Lincoln, Temple and Pitt will each send four representatives to discuss common issues on their campuses, such as sexual assault and mental health, and how each school deals with such concerns.

“It’ll be really good to see how other schools are handling similar issues,” Dall said. “We can brainstorm solutions together.”

PASS used to be an annual meeting in the early 2000s but stopped in 2001. Last year, the program started again when the schools met at Penn State University.

Dall will represent Pitt with board members Rohit Anand and Arlind Karpuzi as well as Governmental Relations Chair Nick Fisher.

“It will be a great chance to network with other student leaders,” Dall said.

At Tuesday’s meeting, SGB also appointed eight new members and one alternate to the elections committee.

The Panther Swim Club requested $1,917.50. The board approved $1,625.00 and denied $292.50. The allocation will be used for transportation and lodging at a swim meet needed for qualification for nationals.

Pitt Off the Hook requested $1,265.00. The board denied the request in full. The allocation was to be used for a leadership seminar.