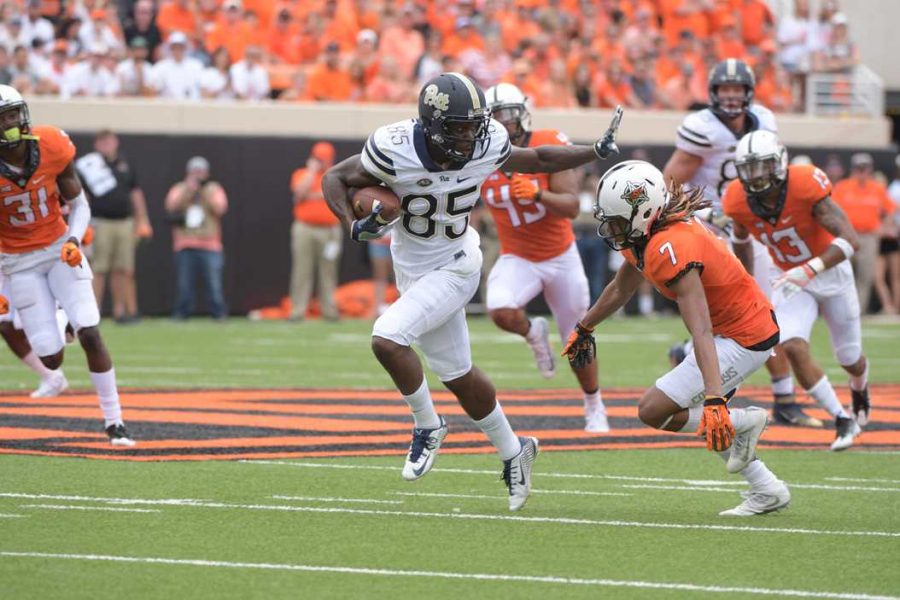 Pitt’s passing offense could not keep up with Oklahoma State Saturday, due in part to redshirt senior Dontez Ford sitting out the game because of a reported broken collarbone.

Playing without the team’s only experienced wide receiver, quarterback Nathan Peterman threw for 237 yards and completed less than 50 percent of his passes. Redshirt junior Jester Weah had an explosive 60-yard touchdown but finished with only two catches.

The Panthers’ weak — or absent — passing offense caused this week’s 45-38 loss, and to get back on track, the team will need a receiver to step up and ensure the line doesn’t cripple any further.

Going into Saturday’s game, reports surfaced that Ford would not be playing because of a fractured collarbone. The injury, which requires surgery, will cause the senior wideout to miss a few games at the very least.

The inconvenience of Ford’s injury comes at one of the toughest times in the Panthers’ schedule, keeping him out not just against Oklahoma State but also presumably next week against the defending ACC Coastal Division champion North Carolina Tar Heels.

Ford proved he was an offensive asset last fall alongside former Panthers star wide receiver Tyler Boyd. He averaged an impressive 19.4 yards per catch over 26 receptions, good for 505 yards.

Pitt wasn’t counting on Ford to replace all of Boyd’s production, but the team’s seasoned receiver was clearly missed on the field, as the team struggled to catch up in the passing game.

The Panthers’ 237 passing yards paled in comparison to Oklahoma State’s high-powered offense, which went for 540 yards.

In the first play of the game, Oklahoma State quarterback Mason Rudolph threw a 91-yard touchdown and didn’t let up after that.

The teams engaged in a back-and-forth battle, with the Cowboys jumping out to multiple two-touchdown leads, but the Panthers kept coming back. Then, with the game tied at 38 early in the fourth quarter, a lightning storm caused an almost two-hour delay.

The teams traded a pair of punts after returning to the field and looked to be in a stalemate with overtime approaching. But with less than two minutes on the clock, Rudolph found receiver Jhajuan Seales, bringing the Cowboys one yard away from a go-ahead touchdown.

Oklahoma State running back Rennie Childs then dashed the extra yard for his fourth touchdown of the game, and Peterman threw an interception on Pitt’s ensuing possession to end the comeback attempt.

Pitt head coach Pat Narduzzi anticipated that Oklahoma would be its biggest competitor so far, and after the game’s conclusion, he made it clear that the team would analyze exactly what went wrong.

“When you talk about them having good receivers, well guess what, they have good [defensive backs] too,” Narduzzi said. “They’re big, tall, lengthy guys and they’ve got some pretty good coverage guys too.”

At the near end of Saturday’s game, it seemed Pitt’s offense had finally sparked. Redshirt freshman Tre Tipton, in for Ford, along with fellow receivers Weah and Quadree Henderson, laid out for a diving grab on fourth down –– the first catch of his career –– to extend the game. Tipton made two more big catches on the drive before Peterman’s interception cut Pitt’s comeback attempt short. Still, Tipton’s performance indicated that the young receiver may be ready to take a larger role in the offense going forward.

The Panthers will need him to next week, when they travel to take on another dynamic offense featuring electrifying wide receiver Ryan Switzer.

Oklahoma State reveled in this weekend’s victory after a controversial loss to Central Michigan on the last play of the game a week prior. Pitt’s loss can only be one of few if the Panthers plan to be a championship contender in 2016.

Saturday’s game against the Tar Heels will tell if Oklahoma State was just a case of unfocused offense — a problem Pitt didn’t seem to have against Penn State — or a season plague.

Pitt football will make its next appearance in Chapel Hill, North Carolina to play the Tar Heels Saturday, Sept. 24, at 3:30 p.m.