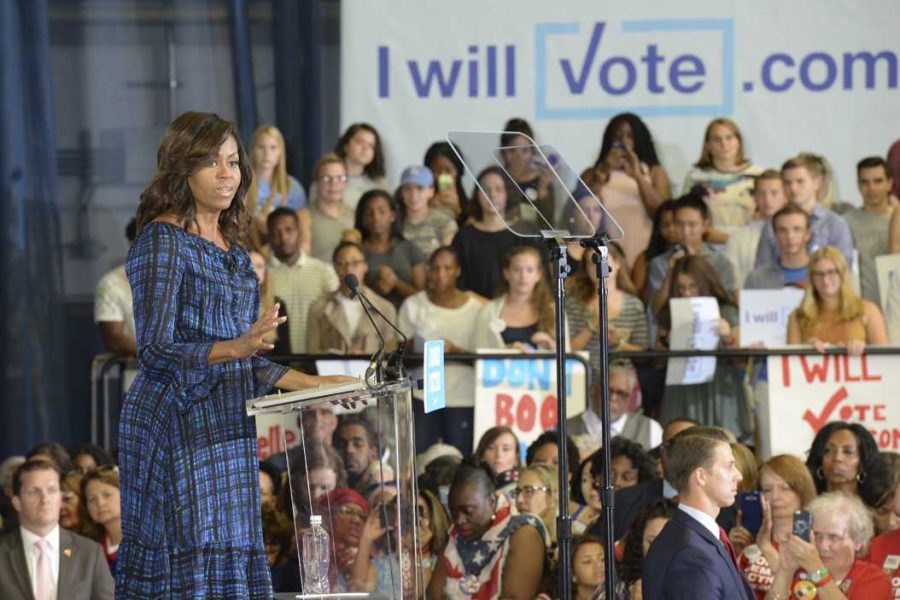 By Wesley Hood and Amina Doghri / The Pitt News Staff

Walking out to Beyoncé’s “Run the World (Girls),” Michelle Obama encouraged Pitt students and community members to run the election, urging them to be the much needed “youth vote” Hillary Clinton has been trying to lock down in recent weeks.

As students lined up to see Obama at the Fitzgerald Field House on Wednesday, a red-, white- and blue-speckled line snaked around upper campus. Donning Hillary Clinton T-shirts, stickers and buttons, about 3,000 students and community members came to hear Obama speak in support of Democratic presidential candidate Clinton. In a dig at Clinton’s opponent, Obama told the audience to vote, even in the face of the negativity that has dominated the election.

“Don’t ever let anyone take away your hope. Negativity is hard to sort through. Don’t let a negative candidate discourage you,” Obama said, referencing Republican presidential candidate Donald Trump.

Speaking just a day after National Voter Registration Day, Obama told the audience they had a responsibility to vote in the upcoming election, especially in Pennsylvania, a contentious swing state. In 2012, Barack Obama only won Pennsylvania by 300,000 votes, she said.

“That amounted to only about 17 votes per precinct. So if you think your vote doesn’t matter, it does,” Obama said. “Get out there and vote.”

Erin McClelland, the Democratic nominee for Congress in the 12th district of Pennsylvania, came onstage before Obama to specifically urge women in the crowd to use their political sway this season.

“You are 52 percent of the population,” McClelland said. “You are the majority. You just have to vote for it.”

Obama has been encouraging voters to support Clinton since July, when she first rallied in favor of the candidate in Virginia and announced her backing during a speech at the Democratic National Convention.

Clinton’s opponent, Donald Trump, visited Pittsburgh last week as the keynote speaker for the Shale Insight conference at the David L. Lawrence Convention Center.
Currently, Clinton leads Trump by three points in Pennsylvania, according to a Muhlenberg College and Morning Call poll conducted from Sept. 19 to 23. Although still ahead in the polls, Clinton maintains a slim lead, edging out Trump by an average of just 1.8 points according to realclearpolitics.com.

Nationally, Clinton is two points ahead of Trump, according to an ABC News and Washington Post poll.

In her speech, Obama refused to call Trump by name, focusing largely on Clinton and her qualifications. She did, however, indirectly refer to the Republican candidate through a few snarky comments on his qualifications.

“Being president isn’t anything like reality TV,” Obama said, emphasizing that Clinton has far more qualifications than her opponent. “We need a grown-up in the White House.”

Paralleling Clinton’s political experience with qualifications necessary to be commander-in-chief, Obama said Clinton is the only candidate who can handle the high-stress situations required of a country with international engagements.

“I’ve seen what it takes to do this job, for eight years, and I know [Clinton] is the most qualified,” Obama said.  “She’s the real deal.”

Throughout the speech, campaign organizers and volunteers, such as Sharon Ricketts, 64, from Monroeville, circulated through the crowd, asking attendees if they were registered for the upcoming election.

“I just want to be a part of this,” Ricketts said. “I’ve been working with the campaign. I want to … show my support. I’ve been phone banking for the past week and a half and registering voters.”

Amongst the voices calling for voter registration and participation, there were some in the crowd, including East Liberty resident Wanda Young, 58, who came solely to see the first lady in person.

Young said she was excited because Obama represented a success story in the midst of racial tension and inner city turmoil.

About halfway through her speech, audience members raised their hands in a call for help as one attendee had fainted in the center of the crowd.

Obama halted her speech to check on the situation, alerting EMTs and security. But she made light of the moment after the audience member was deemed OK.

Along with Obama, other local political figures came to the rally to show their support for Clinton as well, including Allegheny County Controller Chelsa Wagner, self-described fiscal watchdog of the county.

Wagner, 39, from Point Breeze,  brought her two children ––  ages 7 and 4 ––  because she wanted to introduce them to the political process. She said her eldest son came home from school one day and said, “If Trump becomes president, we’re going to have to move to Canada.”

“I watch the debates with my son, and he’s observant,” Wagner said. “He can tell [Clinton’s] not showy or angry. Her composure, her leadership skills, you can’t underestimate that.”

Dolan Edinboro, a first-year student, whose class was cancelled at the last minute, sprinted up the hill to the Field House to see the first lady. The run, he said, was worth it.

“Inside it was almost electric, it’s just so cool to be a part of this,” Edinboro said. “I voted for a Republican candidate in the primary, but then once it came to Trump versus Hillary, it was almost obvious I had to get behind Hillary.”

Edenis Augustin, a first-year student who plans on majoring in psychology, said his fear of this election cycle is driving his vote.

“We need someone to lean on, like Michelle Obama and Hillary Clinton,” Augustin said.

Before leaving the stage, Obama asked the crowd, “Are you with me?”

“We can not afford to squander this opportunity. Do you hear me Pittsburgh?” said Obama. “Elections aren’t just about who votes, but also who doesn’t vote.”