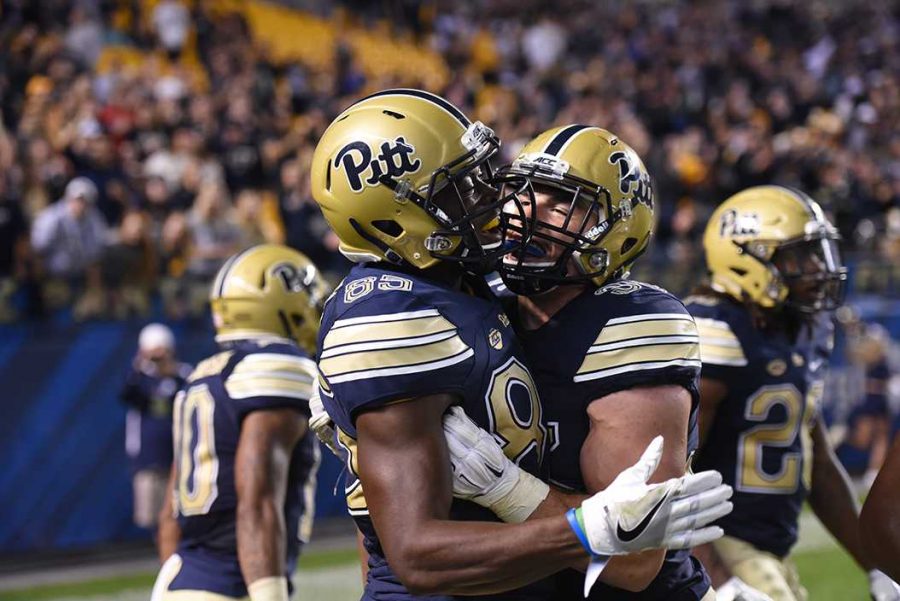 On paper, the score of Saturday’s Pitt-Marshall game would seemingly tell the story of a blowout win for the Panthers.

But numbers can be deceiving, and the 43-27 final certainly was, as the Panthers utilized two touchdowns in the final minute of play to beat the Thundering Herd at Heinz Field Saturday night.

Despite the 16-point difference, Pitt was leading by as little as three with four minutes left. Head coach Pat Narduzzi joked about Pitt’s proclivity for close games, as its previous three games were all decided by one possession.

The Panthers marched down the field on their first drive, aided by a 35-yard completion from Nathan Peterman to Jester Weah. Fullback George Aston capped off the series with a five-yard touchdown run, his fourth score of the season.

Kicker Chris Blewitt missed the extra point though, and the score sat at 6-0.

Pitt continued the momentum on its second possession, as Weah hauled in a 23-yard pass and Quadree Henderson broke off a 34-yard rush, leading to a one-yard touchdown run by James Conner.

Starting inside their own five yard line, the Panthers first handed it off to tailback Chawntez Moss, who broke off two big rushes of 41 and 21 yards. Wide receiver Maurice Ffrench finished the drive by taking a jet sweep 11 yards and spinning past a defender for his first career touchdown, giving Pitt a 20-0 lead in the first quarter.

Narduzzi said Pitt decide to burn Ffrench’s redshirt in order to give Henderson extra rest. Henderson, who has been a spark plug for Pitt’s offense this season, is happy to have the true freshman spelling him.

Pitt had an opportunity to extend its advantage to 27-0, but failed to convert on fourth and goal from the two-yard line, turning the ball over with 9:10 left in the half.

The Panthers eventually widened the gap to that margin, as Peterman connected with Tre Tipton for a 15-yard touchdown pass with :53 second left in the half.

“We threw for more yards than we rushed today,” Narduzzi said. “That’s unusual.”

The score would remain 27-0 heading into halftime.

“We played a superb first half offensively,” Narduzzi said. “We were going right down the field just about every drive.”

The Herd finally tacked on some points, opening the second half with a 15-play, 80 yard drive that lasted nearly six minutes. They scored on a 15-yard touchdown pass from Chase Litton to Josh Knight to chip the deficit to 27-7.

Marshall then attempted a surprise onside kick in an attempt to secure back-to-back possessions to start the second half.

The risk paid off. The Herd recovered at Pitt’s 49-yard line, and, after a fourth-down conversion via a pass interference penalty, paraded to an 11-yard rushing touchdown by Anthony Anderson.

Suddenly, the Panthers’ lead had dwindled down to 27-14.

Another big pass to Weah led Pitt all the way to the two-yard line on the its next possession, but the Panthers had to settle for a 20-yard Chris Blewitt field goal to increase its advantage to 16.

The Herd continued to ride their wave of scoring on their next possession. Sweet Caroline had barely stopped playing over the PA when Marshall opened the fourth quarter with an 83-yard touchdown pass from Litton to Michael Clark.

The Panthers moved the ball all the way to Marshall’s 31 on their next possession, but the Herd sniffed out a fake field goal attempt by the Panthers, giving the Herd the ball back down 10 with 9:03 remaining in the game.

“Give them credit, they made some plays, they didn’t quit,” Narduzzi said. “Which we didn’t think they would.”

Marshall once again carved up Pitt’s defense, putting together a 67-yard drive that ended with a 1-yard touchdown run by Keion Davis to cut the Panthers’ lead to 30-27 with 4:01 left.

Pitt faced a crucial third-and-8 on the following possession, but Peterman delivered. The redshirt senior fired a dart to Scott Orndoff for nine yards and a first down.

The Panthers then faced another third down three plays later, this time needing three yards for a first down to seal the game.

After three straight weeks of failing to convert in these situations, he threw a strike down the sideline to Weah. The 6-foot-3, 210-pound receiver did the rest — snagging the pass, breaking a tackle and dashing into the end zone for a 54-yard touchdown with 1:04 left in the game.

“I loved it when they called the play,” Weah said. “I knew I had the ability to make the play. I just had to go out there and just do it.”

On the final play of the game, Pitt cornerback Avonte Maddox picked off a Litton desperation pass and returned it for a touchdown, and the final score sat at 43-27 Pitt.

“Avonte Maddox needed that,” Narduzzi said of his corner, who had struggled the past two contests against Oklahoma State and North Carolina.

Weah finished the game with a career-high seven catches for 176 yards and a touchdown, while Peterman was 17 of 23 for 280 yards and two touchdowns.

On defense, the Panthers was without one of their best players, as sophomore safety Jordan Whitehead did not play. Narduzzi refused to specify why he missed the game.

“Every game we want him out there,” Ejuan Price said. “I think there were a couple missed assignments and a couple missed tackles we’ve gotta clean up, but not having Jordan is always gonna hurt any team in the country.”

The Panthers improved to 3-2 on the season with the win. They will take on the Georgia Tech Yellow Jackets at Heinz Field next Saturday in the Panthers’ Homecoming game. Kickoff is at 12:30 p.m.