Young WRs Ffrench and Tipton fill in, break out against Marshall 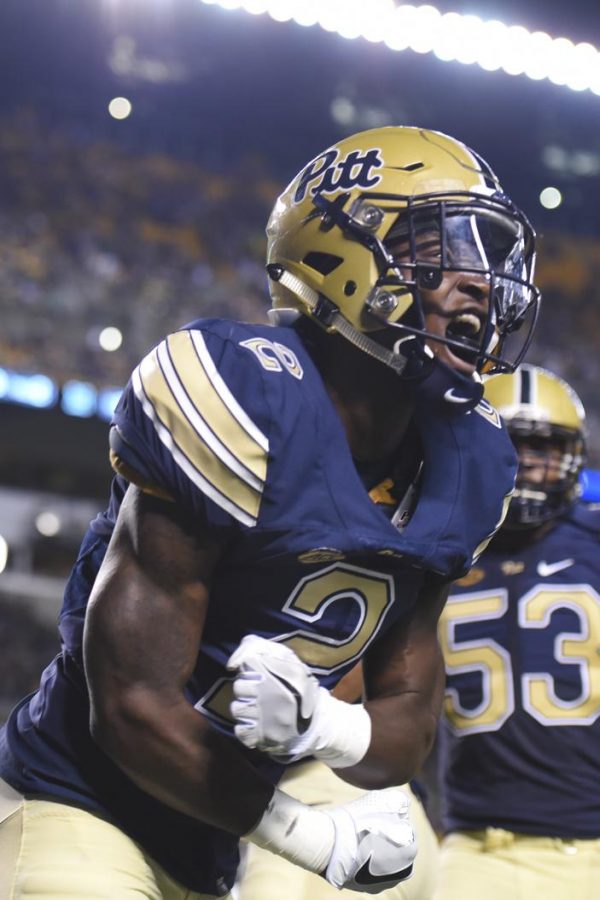 The call was for the Panthers’ trademark jet sweep –– a handoff where a wide receiver gets a running start before the snap. But this time, the call wasn’t intended for the usual receiver.

During Saturday’s game against Marshall, though, Henderson needed a rest, and first-year wide receiver Maurice Ffrench took his place. The Panthers had a first down at Marshall’s 11-yard line with a 13-0 lead and 50 seconds left in the first quarter.

Though Ffrench was playing in just the second game of his college career, and had only two previous carries to his credit, he knew exactly what he was going to do.

He went in motion before the snap and took a handoff from quarterback Nathan Peterman. When he saw a defender crashing down toward the line of scrimmage, he stopped in his tracks and delivered a spin move, leaving the defender grasping for air, and waltzed into the end zone untouched.

“I didn’t think I would ever touch the end zone. I was so confused when I got in, I didn’t know what to do,” Ffrench said. “I’m still in shock to this day. I’ll watch the video [of the touchdown] and be like, ‘Wow.’”

With several wide receiver spots turning over this season, the Panthers have turned to young players like Ffrench, Tre Tipton and Aaron Mathews to step up.

The first crucial player to leave the team was Tyler Boyd, drafted by the Cincinnati Bengals after his junior season. Then it was senior wide receiver Dontez Ford, who left Pitt’s 42-39 win over Penn State in a sling and underwent surgery for a reported broken collarbone.

Ford was the only receiver on the team with significant in-game experience entering the season, and analysts had already questioned how the team would make up for the loss of Boyd.

So far, Henderson and junior Jester Weah have assumed the primary roles as the team’s starting wide receivers, and both have flourished. But the team needs more than just two receivers to be successful on offense.

That puts pressure on Ffrench, Tipton and Mathews to learn on the fly and raise their game.

“When you look at the freshmen who are playing, you have Aaron Mathews, who had a reception this past week,” Pitt head coach Pat Narduzzi said at his Monday press conference. “Frenchie had a nice little run around the edge as well. We’re looking forward to what he’s going to do in the future.”

Ffrench is a true freshman, meaning it is his first year out of high school. Tipton, who is a redshirt freshman –– meaning he sat out last season after suffering an injury and is an academic sophomore –– also scored his first collegiate touchdown in the first half against Marshall.

Tipton almost had a touchdown earlier in the game when he took a handoff of his own around the end and raced 21 yards down the sideline, but came up just short of the pylon.

“I feel like I should have gotten another [touchdown], because I should have reached the ball out and scored, but I’ll be sure not to make that mistake again,” Tipton said.

The Panthers failed to score after Tipton’s run and turned the ball over on downs, but later in the first half, he got another chance to score.

Pitt faced second-and-9 from Marshall’s 15-yard line with a 20-0 lead and 53 seconds remaining in the second quarter. Tipton easily beat a defender to the right corner of the end zone, and when he got there, the ball was waiting for him.

Tipton, a native of Apollo, Pennsylvania, about 35 miles north of Pittsburgh, hauled in Peterman’s pass for his first touchdown as a Panther, giving the team a 27-point halftime lead.

So far, Tipton and Ffrench have been up to the challenge every time the ball has come their way. Both players credit watching Henderson as helping them develop and be ready whenever the coaches put them in the game.

But Ffrench said that the fastest wide receiver on the team would be either himself or Weah, and that he has outraced Henderson numerous times. Tipton didn’t argue.

“I’m not going to disagree there, I’m not going to lie,” Tipton said. “Jester, it doesn’t even look like he’s running half of the time, and he’s just flying. And then, to be honest with you … Ffrench is probably one of the fastest kids I’ve seen as a freshman.”