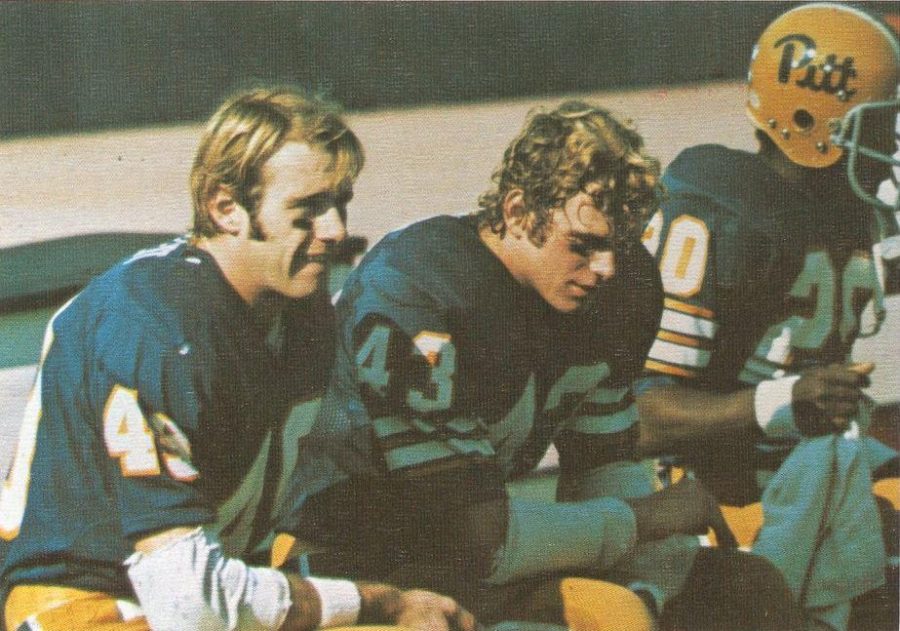 The football team will wear the classic Pitt uniforms in its homecoming game against Georgia Tech on Saturday. Courtesy Pitt Archives

The Pitt football program has produced an overwhelming amount of legendary players in its 127-year history.

After all, the Panthers’ eight Pro Football Hall of Fame inductees are tied for fourth-most of any school in the country, with multiple future Hall of Famers still competing on Sundays in the NFL.

Some players, such as running back Marshall Goldberg and tight end Mike Ditka, starred in the early- to mid-20th century, before head coach Johnny Majors came and helped introduce the iconic Pitt script logo in 1973.

Others, such as wide receiver Larry Fitzgerald and cornerback Darrelle Revis, arrived after the script was discontinued in 1996 and created their own legacies in the Panthers’ block font with the infamous “Dino-cat” emblem.

In honor of the Homecoming game and the return of the classic uniforms, let’s revisit the top five players to ever suit up in the script.

While Pitt has produced numerous all-time greats at several positions, the school is most famous for its incredibly rich tradition of running backs. Craig “Ironman” Heyward was one of the greatest of them all.

Heyward played in 34 games over three seasons at Pitt from 1984 to 1987, racking up 3,086 rushing yards and 24 touchdowns, along with 638 yards and a pair of touchdowns through the air. His best year came as a senior in 1987, when he rushed for 1,791 yards and 12 touchdowns, achieved All-America status and finished fifth in Heisman Trophy voting.

Armed with a bruising running style that could make even James Conner jealous, Heyward went on to play fullback in the NFL for 11 years before dying of brain cancer in 2006 at age 39. His son, Cameron Heyward, is now a star NFL defensive end and one of the leaders of the Pittsburgh Steelers’ defense.

There aren’t many stats to keep track of how offensive linemen perform, but Bill Fralic is responsible for the only one you may have heard of: the pancake.

According to Pitt football’s official website, the team’s sports information office coined the term in Fralic’s 1984 senior season to help quantify the legendary lineman’s impact rolling over opponents on the field. Fralic played for some of the Panthers’ greatest teams from 1981 to 1984, culminating in his 1984 senior season when he finished sixth in Heisman Trophy voting.

To this day, whenever an offensive lineman flattens his defensive opponent on his back with a block, it’s a pancake. Thanks, Bill.

Arguably known as the greatest quarterback to never win a Super Bowl, Marino won plenty of big games during his time at Pitt before going on to shatter nearly every major passing record in his 17-year NFL career with the Miami Dolphins.

Marino played in all 48 games during his four-year Pitt career from 1979 to 1982, passing for 8,597 yards and 79 touchdowns, while leading the Panthers to three straight 11-win seasons from 1979 to 1981 and finishing his career with a pristine win-loss record of 42-6. Pitt finished in the top 10 of the final Associated Press poll in each of his four seasons.

But the legendary signal-caller may be known best of all in Panthers lore for his perfectly placed 33-yard-touchdown pass on fourth-and-5 in the 1982 Sugar Bowl, giving Pitt a 24-20 win over the Georgia Bulldogs.

One of the most dominant defensive players in the history of college football, Hugh Green terrorized opposing quarterbacks from 1977 to 1980. Green was an All-American selection all four years at Pitt and was a consensus first-team choice from 1978 to 1980.

During Green’s time with Pitt as a star defensive end, the Panthers tallied a win-loss record of 39-8-1, while Green registered 460 total tackles and 53 sacks.

Green won nearly every individual award in his senior season given to the top player in college football, including the Walter Camp Award, Maxwell Award, UPI Player of the Year Award and the Sporting News Player of the Year Award. He finished second in Heisman Trophy voting, at the time the highest finish ever by a defensive player.

Those other guys were all pretty excellent, but the greatest Panther of them all is the only one to ever win the Heisman Trophy as the most outstanding player in college football –– Hall of Fame running back Tony Dorsett.

Dorsett ran for 6,526 yards and 59 touchdowns during his four-year Pitt career, setting the all-time Division I college football rushing record as a senior in 1976. The record stood until 1998 Texas running back Ricky Williams surpassed it.

Dorsett’s greatest contribution of all was helping lead the Panthers to an undefeated season and the 1976 national championship with a 27-3 Sugar Bowl victory over Georgia. In a school referred to by many as “Running Back U,” Dorsett is still the gold standard, decked in that vintage blue and gold.