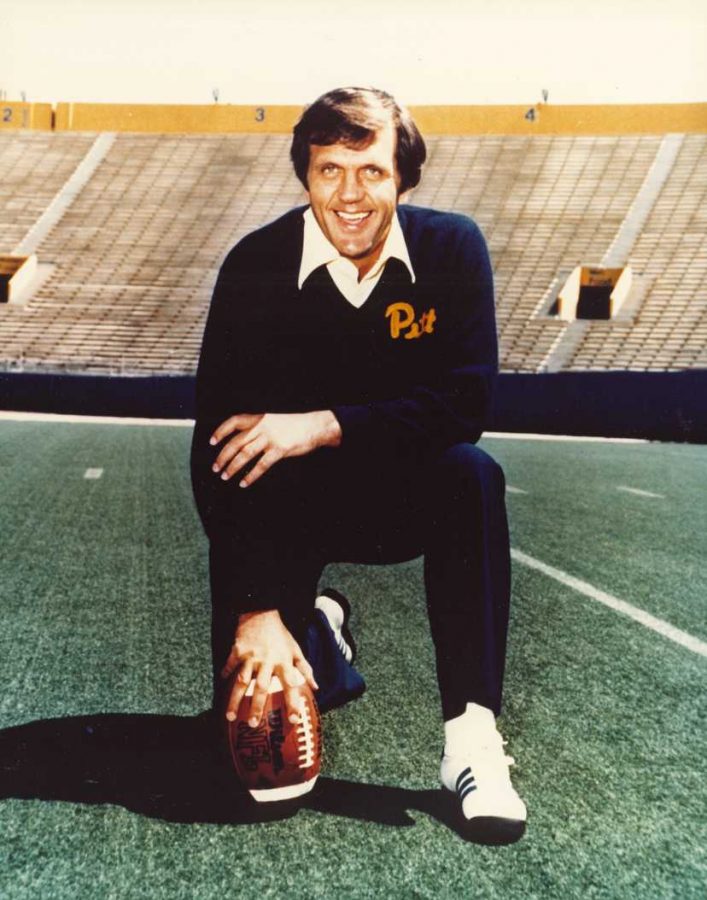 By Bayard Mille | For The Pitt News

This Saturday, the Pitt Panthers will take the field with a new look that isn’t as new as you might think.

Just in time for Homecoming, the football team will sport the royal blue and mustard yellow throwback jerseys worn by some of Pitt’s greatest players from the later half of the last century.

In 1973, Pitt’s former head coach, Johnny Majors, introduced the blue and yellow uniforms to his team. The rationale behind changing the color scheme was two-fold: he believed that the navy blue and gold uniforms were too similar to Notre Dame’s, and he wanted to distance himself from Pitt’s lack of the success in previous years.  His design would be used until 1997.

The year before Majors got to Oakland (when Pitt Stadium was still used), Pitt won just one game. In the coach’s final in 1976, the Panthers went 12-0 and won their first — and only — national championship since the Great Depression.

Somehow, new colors really did lead to a new team — obviously with some quality coaching thrown in as well.

The blue and yellow years were good to the program. The winningest coach in NCAA history, Bobby Bowden said the 1980 team — that ended the year as the second-best in the nation, according to the Associated Press — was the best he ever played against. Six NFL Hall of Famers wore the old colors, including Tony Dorsett and Dan Marino The style signals a modicum of success.

At this point, the University has already returned to the Pitt script of yesteryear in all sports, though not the color scheme. When asked about the decision last year, Athletic Director Scott Barnes told the New York Times, “I haven’t run into anybody who didn’t want it.”

It’s true. If you Google the search term “Pitt script,” you’ll find scores of results hailing the change from the SB Nation blog “Cardiac Hill” to the Times. And The Pitt News last year, we wrote a history of the logo, recognizing the importance of this font to the school and its adoring fans.

Now, it’s time to complete the look — get rid of the drab Vegas gold and navy blue, and return to the kind of vibrancy the Pitt script deserves. Let’s get colorful.

Pitt’s 1997 move to the current colors came at a time when the specter of dark and dull colors haunted the sports world. In 1996, the Philadelphia Eagles abandoned the beautiful kelly green hyper-elusive quarterback Randall Cunningham wore in favor of the comparatively gross “midnight green” that Nick Foles was painfully mediocre in.

In 2000, the St. Louis Rams made a move identical to Pitt’s turning in its bright yellow and blue for a duller palate. Most drastically, the Los Angeles Kings turned in their yellow and purple for silver and black, drastically reducing strain on the eyes.

But the tide has begun to turn in a Fauvist fashion once again. The Buffalo Bills have gone back to their former royal blue and red combination. The Washington Redskins have started to wear mustard yellow pants on a regular basis, something they did not do for 20-plus years. In a 2014 interview with 94WPI Morning Show, Don Smolenski, president of the Eagles, suggested that the team is contemplating a return to the old, brighter green — something much of the fan base has wanted for years.

Teams are starting to realize that dull colors do not make them more menacing but instead lull their fans to sleep. Hopefully, Pitt realizes this too.

Backtracking to a brighter yellow would also work better with the rest of Pittsburgh sports. Inspired by the city flag, all three professional sports teams in Pittsburgh wear black and gold. The color scheme is an integral part of the city’s identity, immortalized in Wiz Khalifa’s awful ode to his hometown, “Black and Yellow.” A brighter yellow would bring the Panthers more in line with the Steelers, Pirates and Penguins.

In addition, Heinz Field’s seats are already mustard yellow, which clashes with the team’s current toned-down colors. While most of the spectators wear blue and gold during Pitt games, the seats burst forth with color when a ticket remains unsold by kickoff, making it obvious when Pitt cannot sell out its own stadium.

Updating the uniforms could help the fans blend better with the seats, making it less clear when the stadium is not filled to capacity. Recruiting, driving ticket sales, boosting morale — it’s all about presenting a strong vision of Pitt’s program, and looking drab isn’t exactly a hook.

While the University has made strides toward a brighter future, its football team is overdue for a makeover. For direction, the football team need not look further than what it’ll be wearing this Saturday.

Write to Bayard at [email protected]