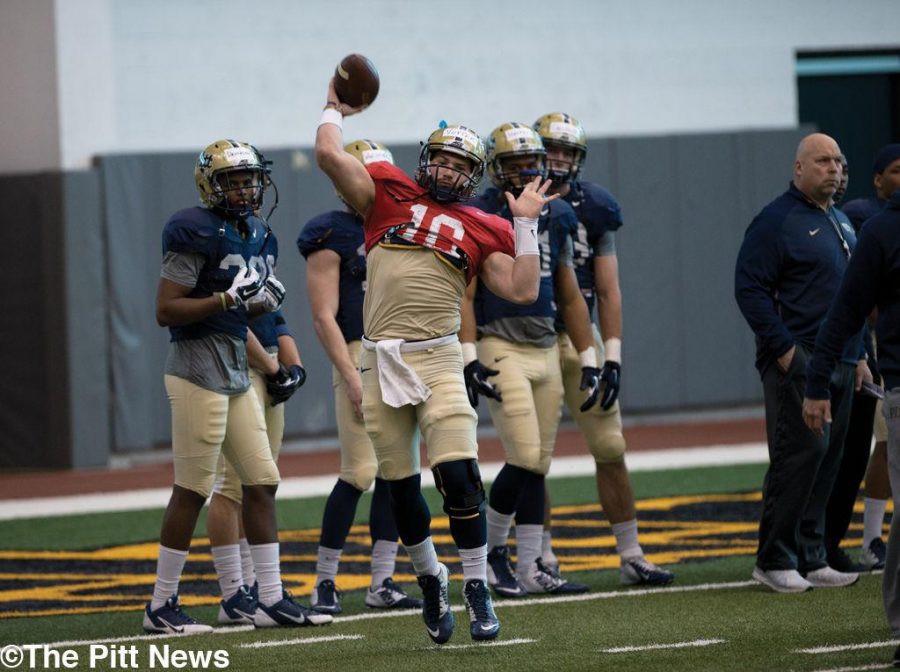 Chaney now plans to employ a run-based, pro-style offense in his first year as offensive coordinator and quarterbacks coach at Pitt.

Fundamentally, Pitt and Purdue’s offenses are starkly different. But in the context of when Chaney employed them during his career, they’re both styles that differ from most in college football.

Chaney hasn’t made any large changes in his offensive philosophy since he started at California State University, Fullerton. Despite the offensive changing, Chaney has always had the basic strategy: to adapt his offense to his personnel.

“People say ‘you’ve done so many offenses.’ Well, I do that because that’s what the people lend me to do,” Chaney said. “I don’t try to cram a round pole in a square hole, I just want to do as good as we can by the people we have.”

“Coach Chaney does a great job and it’s just fun to listen and learn,” Narduzzi said.  “I trust [him] to get the job done.”

It started at Cal State Fullerton, where Chaney employed an empty backfield, pass-dependent spread offense in 1985. After watching Joe Tiller then execute the same plan at Wyoming, Chaney and Tiller moved to Purdue in 1997, where Chaney became the team’s offensive coordinator under Tiller.

The duo enforced the same spread offense there, but with more success and on a larger style scale, gaining national notoriety.

The offense became known as “basketball on grass” because of its ability to score easily, reaching its peak in 2000 when Purdue won the Big Ten, propelled by quarterback Drew Brees, who led the offense to 31.8 points per game.

But as time passed, Chaney said he got bored with the offense. Despite his success, his team’s lack of physicality stuck in his mind.

“It’s a mentality of physical play that’s lacking when you wing it all the time and your linemen are backing up all the time in pass protection,” Chaney said.

Without that physicality, Chaney came to the realization that his teams couldn’t win situational football and thus couldn’t consistently compete for championships.

Chaney affirmed those beliefs when he moved from Purdue in 2006 to spend two years in the NFL with the St. Louis Rams as an offensive line and tight ends coach.

“I learned what I already knew,” Chaney said. “It reinforced that, to win at any college level, the highest levels of football, to win championships — not to win six or seven or eight games — you’ve got to win situational offense: third and one, first and goal at the one-yard line, four-minute offense when you’re trying to run the clock out so the other team can’t get the ball back.”

With these now-established beliefs, Chaney took the offensive coordinator job at Tennessee in 2009, running a pro-style offense and utilizing more pistol and I formation sets.

The offense changed from year to year, though it became especially pass-heavy in 2012, when quarterback Tyler Bray threw for 3,612 yards and 34 touchdowns.

After four years with Tennessee, Chaney moved onto Arkansas, where he took the same position as offensive coordinator and quarterbacks coach.

This ability to change in concepts easily while maintaining physicality is why Chaney prefers a pro-style offense to spread.

Though Chaney was confident in his ability to succeed at Arkansas, something didn’t feel right. He wasn’t happy, and he felt the desire to seek other employment outside of the SEC.

“You reach my age, and after 30 some years of doing this, happiness within the profession is important to me,” Chaney said. “You need to wake up in the morning, and, when you’re shaving and looking at that dude in the mirror, you want to like what you see. You want to enjoy going to work, getting in your car and driving to work.”

After some mutual friends reached out to Narduzzi, Chaney flew into Pittsburgh to meet with him. They got along well, Chaney said, and Narduzzi offered him the job, which he graciously accepted.

Since then, he and Narduzzi have formed a strong relationship.

“I want happiness. I want dialogue with my immediate boss, which I have,” Chaney said. “I think he trusts me, and I trust him to voice his opinion when he needs to.”

Chaney is still addressing his roster, though he knows he wants to distribute the ball largely in receiver Tyler Boyd’s and running back James Conner’s hands, and has no problem with becoming predictable in that strategy.

“Predictability doesn’t bother me if you end up with a ‘W’ on the scoreboard,” Chaney said.

Beyond that, Chaney commented that the tight ends will play an important part in catching and blocking, and that he’ll continue to create designed runs for quarterback Chad Voytik, simply because “he’s too good at doing it not to.”

What schemes and how much his team will run and pass is still up in the air and dependent on Voytik.

“It all depends on the quarterback of how much you can move from pro-style to spread,” Chaney said. “How many concepts can he grasp, what’s his aptitude, what’s his physical abilities.”

Chaney already has plans for tailoring the offense to the sophomore’s abilities.

“He told me he’ll put me on the move more and get me out of the pocket,” Voytik said.

During the next four spring practices, throughout the summer and then the season, Chaney will continue to learn the capabilities of his offense. His specific strategies are very much in flux. What Chaney ultimately desires is flexibility, and that won’t change, no matter the roster.

“I’d like for us to have enough flexibility to feel like our talent level on our offense is able to do whatever the hell I want to do,” Chaney said. “So every week we line up, we feel we can be competitive with any team in the country.”