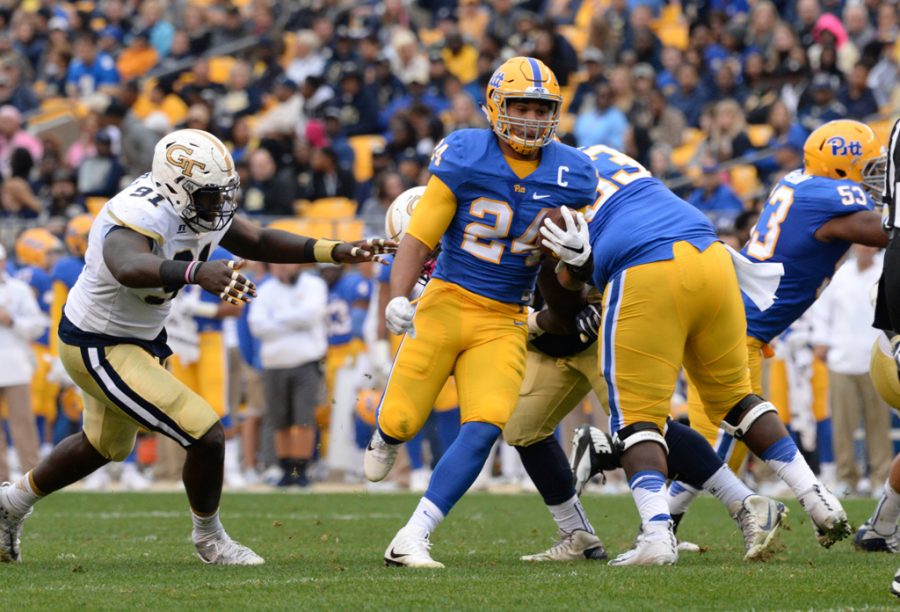 Chris Blewitt had done it again. For the second year in a row, Pitt’s kicker had just nailed a clutch kick to secure a win against Georgia Tech.

The only difference this time was that Blewitt didn’t watch it happen.

“I could feel it go off a touch right, but I didn’t see it, I had no clue what happened until somebody told me,” Blewitt said. “I wasn’t exactly sure what happened, but I assumed it was good, because I heard our fans were cheering.”

Blewitt was tackled from underneath by the Yellow Jackets’ A.J. Gray, but still managed to bounce his 31-yard kick off the right goalpost and over the crossbar to give Pitt (4-2 overall, 1-3 ACC) a 37-34 win over Georgia Tech (3-3 overall, 1-1 ACC) as time expired.

Blewitt’s field goal capped off a zany game that featured plenty of wacky plays and a wild second half. The Panthers –– donning throwback royal blue-and-mustard yellow uniforms for homecoming week –– led most of the game, gave up the lead late, then came back to remain unbeaten at home and earn their first ACC victory of the season.

Offensive coordinator Matt Canada dug deep into his arsenal on Pitt’s opening drive. The Panthers capped off their opening possession with one of the most unusual plays in recent Pitt history.

After moving down to the Yellow Jackets’ 24-yard line, Nathan Peterman dropped back to pass, but then pivoted and threw behind the line of scrimmage. Not to a running back like James Conner or speedy wideout like Quadree Henderson, though.

Instead, he threw it to 6-foot-6, 300-pound sophomore right tackle Brian O’Neill, who saw an opening and rumbled down to the corner of the endzone for a 24-yard touchdown rush.

O’Neill played wide receiver in high school and was recruited by Pitt as a tight end, but this was his first touch on offense in two years with the Panthers. He said the coaching staff told him Tuesday morning they would run the play if they got to around the 25-yard line on the left side of the field.

Georgia Tech’s run-heavy triple-option offense, where the quarterback and multiple running backs have the option of running the ball on almost every play, gave the Panthers’ fourth-ranked run defense trouble all night, and it started on its opening drive. But Pitt was able to hold the Yellow Jackets to a 37-yard field goal on a 14-play, 71-yard drive.

Pitt’s next drive was as impressive as its first, albeit without an offensive lineman scoring. Peterman converted a couple of first downs, and true freshman running back Chawntez Moss broke off an impressive eight-yard run to bring the Panthers four yards from the end zone.

Redshirt sophomore running back Qadree Ollison found the corner on Pitt’s next play, rushing for his first touchdown of the season and increasing the Panthers’ lead to 14-3.

Georgia Tech struck back immediately though, as returner J.J. Green took the ensuing kickoff 96 yards for a touchdown. But the Panthers responded with a 10-yard rush by Henderson to extend their advantage to 21-10.

After converting by the nose of the football on a fourth-and-1, Georgia Tech’s offense scored its first touchdown of the game on Justin Thomas’ 31- yard touchdown pass to Ricky Jeune with 1:48 left in the first half.

After a Pitt three-and-out, Georgia Tech received the ball with 35 seconds remaining at its own 33. A 29-yard pass from Thomas to Clinton Lynch set up a 41-yard field goal by Harrison Butker, leaving the Panthers with just a one-point lead heading into halftime.

Narduzzi said his team remained confident throughout the game, even when Georgia Tech began to claw back.

After stopping the Yellow Jackets on fourth down to start the second half, Pitt faced a fourth down attempt of its own on its next possession. George Aston converted the first down on a jet sweep, then James Conner broke off a 21-yard run down Pitt’s sideline to get the Panthers into field goal range.

The drive stalled there, and Pitt settled for a 34-yard field goal by Blewitt to push its lead to 24-20.

Another field goal by Blewitt, this one from 41 yards out, widened the deficit to a seven points with 12:19 remaining in the game. The field goal was the 51st of Blewitt’s career, breaking Pitt’s all-time school record.

Sure enough, Georgia Tech erased the seven-point deficit on its very next drive. Thomas pitched the ball to Lynch, who sprinted 45 yards to the end zone to even the score at 27.

“We gave up that one big play in the second half on a toss play,” Narduzzi said. “That’s normal football –– that’s not triple-option football.”

The Panthers then gave the ball back to the Yellow Jackets on a botched handoff from Peterman to Henderson, which Georgia Tech recovered with 8:16 remaining in the game.

Thomas completed a 27-yard pass to Brad Stewart on a third-and-10, setting up Georgia Tech for an eventual touchdown rush by Green to give the Yellow Jackets their first lead with 5:22 left.

Pitt tight end Scott Orndoff repeated his coach’s message about the Panthers remaining confident in each other even when down.

“We don’t give up,” Orndoff said. “We believe in each other until the end of the game — offense and defense. One steps up for the other when we need them.”

On Saturday, Orndoff was the one who picked up the defense.

With Pitt facing a third down with just under four minutes left in the game, Peterman fired a bullet to the senior tight end, who was streaking wide open over the middle of the field. Georgia Tech defensive back Corey Griffin deflected the pass, but it fell right into Orndoff’s hands, who raced into the endzone for a game-tying 74-yard touchdown.

“I was like, ‘Oh, [Griffin’s] gonna get a hand on it,’ and he did,” Orndoff said. “Sometimes the ball just bounces your way.”

The Yellow Jackets faced a crucial decision on their next possession, facing a fourth-and-1 at their own 34-yard line with 2:25 remaining.

They gambled, and ran it right up the middle with Dedrick Mills. But he ran into Pitt’s 335-pound senior nose tackle Tyrique Jarrett, who bear hugged him and tossed him back to give the Panthers possession in great field position.

Narduzzi credited linebacker Matt Galambos with diagnosing Georgia Tech’s formation and shifting the defense into a set that was ready for an straight dive. Jarrett was there to clean it up.

“The mentality was to be that wall that we talk about,” Jarrett said. “I was just trying to do my job. Matt Galambos backed me up on the tackle. It was just a big play.”

A 16-yard rush by Ollison set up a short field goal for Chris Blewitt with five seconds remaining. And, despite bouncing off of the right post, the ball sailed in with no time left on the clock.

Orndoff said he was sure of the outcome the second Jarrett lifted Mills.

“As soon as [Jarrett’s stop] happened, I knew we weren’t going to lose this game,” Orndoff said. “The offense was going to get the ball back and we were going to do something about it.”

Pitt is 4-2 on the season, and now 1-1 in ACC play. The Panthers travel to Charlottesville, Virginia, next Saturday to take on the Virginia Cavaliers in their third conference game at 12:30 p.m.