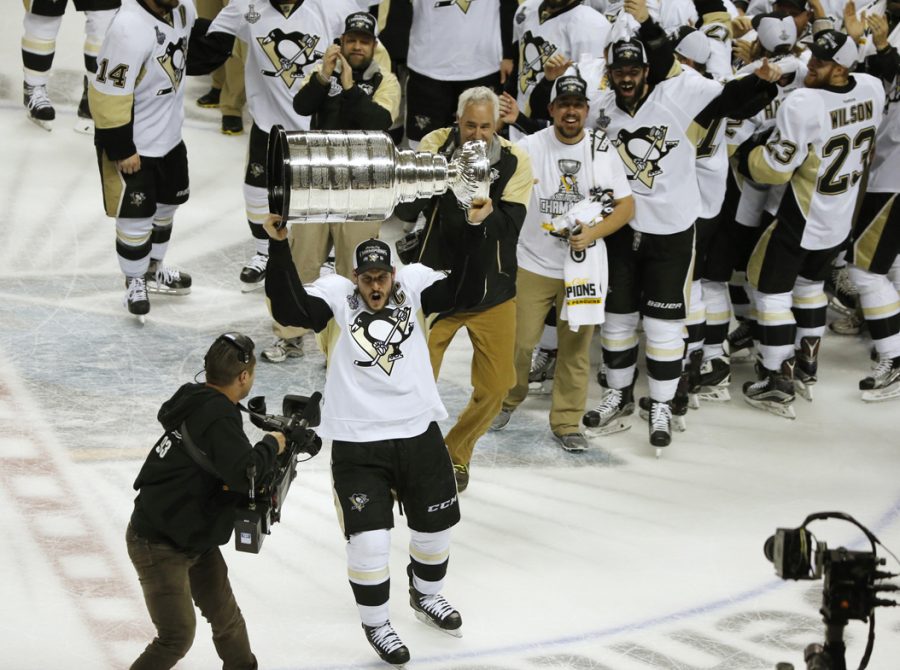 Penguins captain Sidney Crosby lifts the Cup after winning 3-1 against the San Jose Sharks in Game 6 of the 2016 Stanley Cup Finals. (TNS)

By Alex Butelli | For The Pitt News

As they raise their fourth championship banner at the newly renamed PPG Paints Arena Thursday night, the Pittsburgh Penguins will begin their quest for another title — their “One for the Thumb.”

The Penguins open the defense of their 2016 Stanley Cup title at home with a Metropolitan Division matchup against Alex Ovechkin and the Washington Capitals Thursday, Oct. 13.

The team is down a few key players from last season: defenseman Ben Lovejoy, who left in free agency; goalie Matt Murray, who will miss the first few weeks of the season with a broken hand; winger Bryan Rust, with an undisclosed injury; and captain Sidney Crosby, who suffered a concussion at practice last Friday.

But the Penguins still possess all the pieces necessary to lock up their 11th-straight playoff berth and make a run at back-to-back Stanley Cups.

When Crosby, Rust and Murray return, the Penguins will feature a virtually identical lineup to last year’s Stanley Cup-winning team –– 19 of 20 skaters to be exact. They also bring back fiery head coach Mike Sullivan for his first full season with the team.

Here’s how the Penguins’ roster stacks up heading into the season:

Although Murray will start the season watching from the bench, the Penguins will have a perfectly capable replacement in net.

Marc-Andre Fleury has plenty of experience with the team since being drafted No. 1 overall in 2003. The 31-year-old goalie held down the Penguins defense for 11 years –– winning a Stanley Cup with the team in 2009 –– before suffering a second concussion late last season and ceding the starting job to Murray.

When he did play last year, Fleury was nothing short of stellar. He posted a win-loss record of 35-17 with a .921 save percentage. Meanwhile, the 22-year-old rookie Murray dominated the postseason crease with a 15-6 record and .923 save percentage.

Fleury will be the first netminder to take the ice for Pittsburgh, but it’s still a mystery who will start the most for the 2016-17 season after Murray returns.

Kris Letang is a two-time All-Star and the unquestioned leader of this group.

When Trevor Daley went down with a broken ankle in Game 4 of the Eastern Conference Finals, Letang stepped up and logged even more minutes, averaging an insane 28:53 minutes of ice time per game in the 2016 playoffs. He also scored the game-winning goal in the Penguins’ 3-1 Cup-clinching win in Game 6 of the Stanley Cup Finals in San Jose, California.

Losing Lovejoy to the New Jersey Devils is a big loss for the defense, but the return of Daley should help fill the void.

The Penguins acquired Daley from the Chicago Blackhawks in December 2015, and he turned out to be everything they expected and more — until he broke his ankle.

This season, a healthy Daley will provide a huge boost to the defense. His creative offensive skills are just an added bonus.

Center Evgeni Malkin may struggle with injuries, but he has still managed to average at least a point per game for five straight seasons. The former NHL MVP will likely take over as the team’s No. 1 center, until Crosby returns and Malkin slides down to the No. 3 line alongside young winger Scott Wilson.

Wilson returned from a lower leg injury to lead the Penguins with five points this preseason and has already started to develop chemistry with Malkin.

“Coach told me to play north-south tonight, especially with a guy like Geno,” Wilson told the Pittsburgh Tribune-Review after the Pens’ preseason finale Oct. 8. “As soon as he [gets] the puck, I just head to the net and be ready, because he can sneak anything through the defensemen.”

In continuation of up-front talent, the Penguins’ No. 2 line of Carl Hagelin, Nick Bonino and Phil Kessel, affectionately known as the “HBK” line, stole the show in the 2016 playoffs. Kessel led the team with 10 goals and 22 points in the playoffs, proving to be a vital part of the offense after arriving from the Toronto Maple Leafs in a trade last offseason.

Expect the “HBK” line to continue to infuse the offense with energy and light up the goal lamp this season.