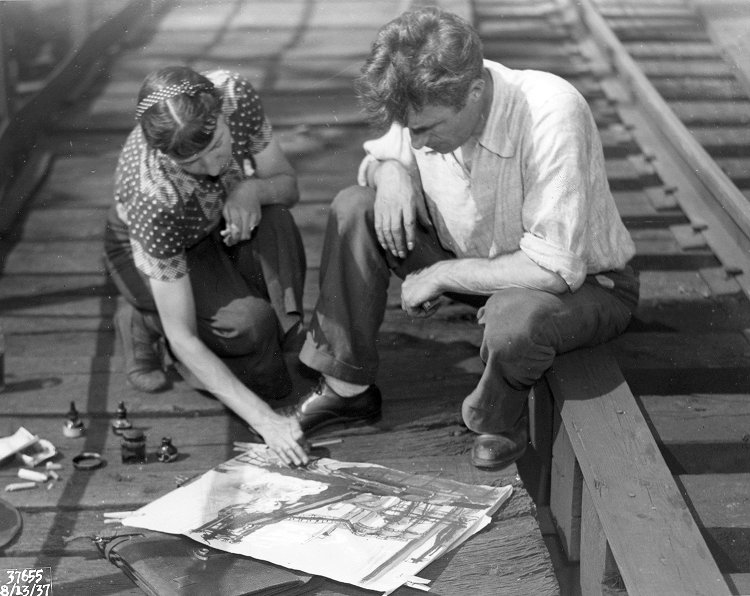 Artists pore over a sketch of the Carrie Furnaces. Courtesy of University Library Systems

Professor Laurence Glasco doesn’t advise his students to shy away from history’s dark side. In fact, he encourages exploring the moments a high school textbook might’ve left out.

The students in Glasco’s History of Black Pittsburgh class gathered around the Stephen Foster memorial sculpture outside the Carnegie Museums of Pittsburgh last Wednesday night.

The statue depicts the famous playwright and Pittsburgh native sitting down, sheet of paper in hand, with a smiling slave playing banjo at his feet. The scene references Foster’s work composing minstrel music, which accompanied shows featuring white actors in blackface.

In a discussion continued from their last meeting, the students debated over whether the sculpture is too offensive to remain standing.

Glasco thought the statue should remain, repeating a quote from William Faulkner: “‘The past isn’t dead. It’s not even past.’ It’s there, around us.”

Classes that integrate Pittsburgh’s landmarks and history into the curricula, like Glasco’s, are plentiful at Pitt. The history department alone has offered at least three classes in the last three years focused on Pittsburgh’s history, according to the department’s Director of Undergraduate Studies John Stoner.

While Pitt doesn’t keep a comprehensive list of “Pittsburgh” classes across all departments, mandatory first-year programs in the Dietrich School of Arts and Sciences do have a “Pittsburgh component” to them, according to John Twyning, the associate dean for undergraduate studies for the school.

But students can also take the sociology department’s Pittsburgh Area Studies course, which examines the city and its history through a sociocultural lens, or a class on the playwright August Wilson in the English department. Wilson’s 10-play cycle, known as “The Pittsburgh Cycle” tells the story of black people in 20th century Pittsburgh, with each play chronicling a decade.

Professors and students say this kind of historical, location-based learning breeds appreciation and understanding for the city the courses, and the University, are embedded in.

“In order to understand how you may fit into a city or a town, you have to understand how that place came to be — and for that, you have to have some sense of its history,” said Jessica Fitzpatrick, a teaching fellow in the English department’s literature program. “And, by history, I mean more than just a timeline of facts — I also mean the experiences, values and emotions of people who have gone before us.”

Universities in other metropolitan areas have also taken to incorporating their surroundings into their syllabi. New York University offers numerous classes centered around New York City, including an engineering class about the history of the town’s transit system and an art course that introduces students to the area’s museums. The University of Chicago has an entire department dedicated to exploration of the city.

In Pittsburgh, the city is what graduate student Frank Paciaroni described as a “case study” for the broad and long-lasting effect the local economy can have on culture.

“Through sociological studies, so many interesting social processes can be seen and so much can be learned,” said sociology professor Mike Epitropoulos. “Pittsburgh is also a place that — in my opinion — has disproportionately impacted the nation and the world.”

As a Pitt alum and son of Greek immigrants from the relatively diverse city of New Castle, Pennsylvania, Epitropoulos grew up around Italian, Irish, African-American and Syrian families. He said he always thought of the Pittsburgh region as a “treasure.”

Even though Pittsburgh is no longer a steel town, he added the lingering effects of that industry are visible in every neighborhood.

“The city’s and region’s history attracted people from around the world to work in its coal mines, steel mills and other industries,” he said. “Those people, literally, built Pittsburgh physically and culturally — as evidenced by our great food culture, ethnic festivals and old-school neighborhoods.”

That’s why most of the classes include a field trip element. In the course Secret Pittsburgh, students explore lesser-known places around the City of Bridges, such as the National Negro Opera House and the venue-hopping Quantum Theatre.

Fitzpatrick, who taught the course last fall and spring, picked some locations for her class to visit based on how well they encapsulate the city’s varied cultural scenes. This fall it is currently taught by Professor Nick Coles.

She considers Carrie Furnace — abandoned, unused smelting towers located in Swissvale — a strong symbol of Pittsburgh’s changing history, from Steel City to art hotspot. The furnaces, walls lined with graffiti and a giant metal deer sculpture, play host to historic tours, art installations, weddings and concerts, “all bustling about at this one historic space,” Fitzpatrick said.

“So this one site offers a way to wander through all of these different but connected stories,” she added. “It’s an industrial site, one representing both the crowning achievements of the Pittsburgh steel era and the severe decline that followed the shift away from that type of economy.”

Through Pitt Arts, free or reduced admission to art and culture sites and free transportation, Fitzpatrick said the University offers students a lot of opportunities to explore. But the classes add an educational element to tourism that general wandering might not.

The History of Black Pittsburgh course is now studying Pittsburgh in the post-slavery era. Its discussion moves between examples and historical anecdotes, including stories like that of Henry “Box” Brown, who mailed himself in a giant crate from Richmond, Virginia, to Philadelphia in the year 1849 to become a free man.

The class also touched on the grandfather of black nationalism, Martin Delany, who spent nearly two decades in Pittsburgh as a doctor. Delany championed black involvement during the abstinence movement, which urged a life absent of drugs and alcohol.

“You wouldn’t want an army of potheads, right?” he asked the class.

To accompany the study of slavery, junior Sam Ford, geography major and exchange student from England, gave a presentation on the Woodville Plantation, located about 30 minutes southwest of Pittsburgh.

The class visited the plantation — where, at the time of the Whiskey Rebellion, slaves outnumbered family members at Woodville and nearby Bower Hill by a 5 to 1 ratio — the week prior to Ford’s presentation.

“You don’t think this stuff happens so close to home,” Ford said.

But of course, Pittsburgh’s history, like its present, hasn’t always been pleasant or simple. Epitropoulos, like Glasco, sees that too as a learning opportunity.

“We can certainly see the relationship between a community’s economic base and its relationship to all of the social institutions,” Epitropoulos said. “We also see that ‘the Most Livable City’ status,” which The Economist dubbed the city in 2014, “is not something that has been enjoyed across all segments of society, as black people here are of the worst off in urban U.S. socioeconomic metrics.”

Although neighborhoods such as East Liberty have seen tech companies — Google included — and nonprofits move into the area, community members and observers have worried that the change may have been at the expense of the lower class. As property value has risen in the community, many residents have been evicted from their homes.

He later said that Pittsburgh’s demographics are similar to that of major American industrial cities, but that job market changes have precipitated rare fluctuations in race, gender and age.

“Pittsburgh is unique in that it has emerged from an almost three-decade lull to blossom into a new hub of technology firms and ‘Eds-and-Meds,’” he said, referring to universities and medical institutions, of which Pittsburgh has both, “that are attracting millennials and young professionals from around the country and the world.”

Fitzpatrick stressed that understanding the ways in which the economy, art and history have shaped a city can help students understand and make a mark on their looming futures.

“Learning about the ways history continues to shape communities can help encourage students to consider how their future careers may also impact communities, and how the skills they’re currently acquiring may benefit from an ability to seek out and connect various histories with contemporary realities,” Fitzpatrick said.

“History shouldn’t always repeat itself, after all,” she added.