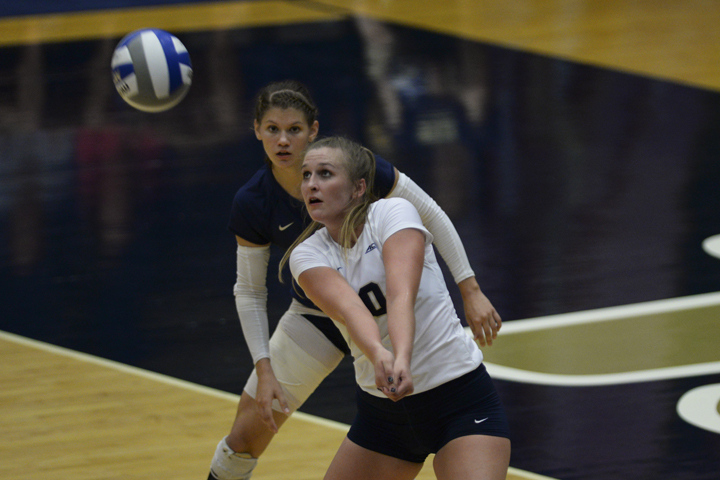 Mariah Bell (10) and the Pitt volleyball team advanced to the second round of the NCAA Tournament with a 3-1 win over Dayton on Friday. Jeff Ahearn | Senior Staff Photographer

The Pitt volleyball team picked up a big conference win on the road Friday but narrowly missed adding an even bigger one to its resumé on Sunday.

The Panthers (14-6 overall, 5-3 ACC) continued their road trip this weekend with a 1-1 performance against conference opponents in Florida. The Panthers defeated the Miami Hurricanes on Friday, 3-1, then fell to the No. 15 Florida State Seminoles on Sunday by the same score.

Miami entered the match with a 7-11 overall record and 1-5 record in ACC play, making it more of a tune-up match for Pitt’s showdown with the Seminoles. But that didn’t make it easy for the Panthers to gain an important conference win.

To get the win, Pitt relied on its offensive staples: Mariah Bell and Stephanie Williams.

“Mariah was really solid all night and carried a big load,” Pitt head coach Dan Fisher said Friday in a press release. “Everyone else hit for a pretty high percentage. Stephanie struggled for the first few sets and then just turned it around in set four.”

Both teams remained close in the first set with Miami holding a slight advantage throughout. But the Hurricanes’ lead started to deteriorate, and Pitt fought back to grab the first set, 26-24.

Pitt again overcame an early deficit in the second set to take a 18-17 lead. This time, Miami took advantage of five Panther errors to take the set, 25-22, and tie the match at one set apiece.

Pitt rebounded and jumped out to a 7-1 lead to start the third set. Miami pushed the Panthers to the end and pulled within one point at 23-22, but kills by Bell and Kelsey O’Neill clinched the set for Pitt, 25-22.

The teams were tied at 16 in the fourth set, but it turned out to be the most lopsided of the match. Pitt dominated the Hurricanes and won eight straight points to go up, 24-16, then held on to win the set, 25-18, and the match, 3-1.

Bell had a huge match for the Panthers, posting a career-high 21 kills along with an efficient .350 attack percentage. Williams pitched in with 17 kills as the other main piece of Pitt’s attack.

“It was a good offensive performance tonight,” Fisher said in the release. “As a team, we talked about winning the serve and pass battle, and I think we did that.”

Pitt moved on from this win to take on No. 15 Florida State on Sunday in Tallahassee, Florida.

The Seminoles entered the match with a 13-3 overall record and 6-1 record in the ACC. It turned out to be an extremely competitive battle, featuring a whopping 16 lead changes, but the Panthers fell short because of error-ridden play.

In the first set, Pitt came back from an early deficit to tie the match at 10. Despite hitting one less kill than the Panthers in the set, Florida State hit three fewer errors to take the set, 25-22.

The Seminoles continued their solid play into the second set and built a solid 15-10 advantage. Then Pitt went on a run to win 10 of the next 12 points, eventually taking a 24-20 lead.

The Panthers hit three errors, allowing Florida State to tie the set at 24, but still kept their composure. Bell and Jenna Potts nailed down kills in the next two points to propel Pitt to a 26-24 second-set win.

“The one thing I’d say about Mariah [Bell] is that she just doesn’t quit,” Fisher said Sunday in a press release. “When things aren’t going her way, she keeps swinging, and that’s exactly what we want her to do.”

Both teams kept the match close, especially in the third set. At 17-17, the teams went back and forth three straight times –– tying each other at 18, 19 and 20. The Seminoles gained control from there and surged to win the next five points and the set, 25-20.

The fourth set might have been even more competitive with nine lead changes and 15 ties.

To start the match, the teams traded points and held a tie on every other point from 2-2 until they reached 10-10. Even though the Seminoles only hit 12 kills compared to 17 for the Panthers, they again made fewer mistakes with only three errors to Pitt’s nine.

“We weren’t good enough at the net blocking,” Fisher said in the release. “We also had a few too many attacking errors, but I was pleased with how we fought.”

Pitt will be back home this weekend, taking on the Notre Dame Fighting Irish at the Fitzgerald Field House Friday, Oct. 21, at 7 p.m.