Pitt students decorate t-shirts for It’s On Us campaign 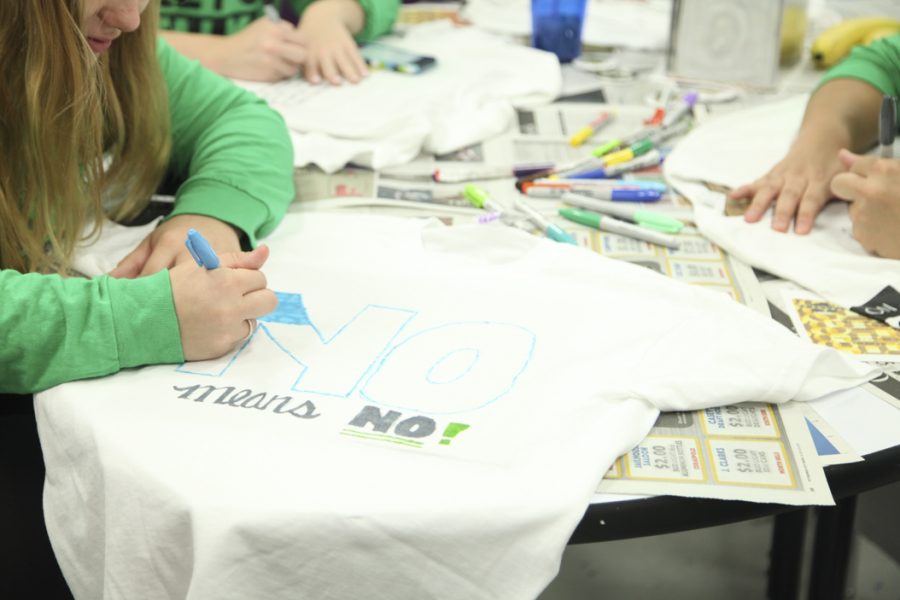 As part of the It's On Us campaign, students gathered Tuesday night to decorate t-shirts and talk about their experiences with sexual assault. Julia Zhu | Staff Photographer

Pitt first-year Chloe Yoder used black and red Sharpie to color the word “no” onto her white T-shirt.

Filling in the large, block-lettered word, Yoder penned the lyrics to the song “Face Your Demons” by the American metal band I Prevail. Yoder said she relates to the song, which is about an assault victim, because she herself is a survivor of sexual assault.

As a part of the It’s On Us campaign, meant to facilitate discussion about sexual assault, Pitt’s Student Government Board held its first shirt decorating event on Tuesday from noon to 2 p.m. The event was held in the Center for Creativity, an open room in the basement of the University Store on Fifth meant for projects.

In the small space, each student received a white T-shirt from the event’s organizers with the It’s On Us pledge printed on the back. The pledge is to recognize, identify and intervene in sexual assault and to help create an environment where sexual assault is unacceptable.

Students decorated the shirts with markers, paint and popular phrases from sexual assault awareness groups such as “consent is sexy,” “no means no” and “speak up.”

Nearly sixty students attended the event which Jasmine Butler, a senior anthropology major and member of the It’s On Us task force, said was a space for survivors to share stories.

“This year, we wanted to do more of an engaging — and also healing for survivors — event,” Butler said.

Arlind Karpuzi — Pitt junior, SGB member and It’s On Us task force member — said they chose the location intentionally to create a more engaging experience for students who have experienced sexual assault. The confined space created an atmosphere of acceptance and gave students an opportunity to converse about their experiences in a private setting, according to Karpuzi.

Butler said that the It’s On Us members only expected to see about thirty people for the day, but nearly sixty came. Different organizers had to leave the event several times to get more shirts that It’s On Us had prepared for the students

It’s On Us is a nationwide campaign started by President Barack Obama and Vice President Joe Biden in 2014 to stop sexual assault on college campuses. Pitt’s It’s On Us campaign is led by Graduate Student Assistants for student health services Greg Valdisera and Alia Gehr-Seloover.

Students crowded around newspaper-covered tables and talked with their friends and with It’s On Us members about the event while coloring their shirts with Sharpies. Conversation remained casual though focused on the words students were tracing on their shirts.

Once they finished decorating, students could have their picture taken with their shirt, and then the shirts were put in a box to be saved for a display that will be unveiled at the end of the school year. The display will feature all the decorated shirts hung on a clothesline on campus to raise awareness about sexual assault. The It’s On Us campaign is planning for the display to be up in late March or early April, but specifics have not yet been decided according to Karpuzi.

The event gave Yoder, a bioengineering student, a chance to share her story. After being sexually assaulted at age 16, Yoder said sexual assault is a topic that needs to be talked about, as survivors are often ignored.

“A lot of the students who [came] to create the shirts have a message [about sexual assault] that they want to convey,” Yoder said. “I think it’ll make an impact when the shirts are unveiled.”

Karpuzi said another T-shirt decorating event will be held on Nov. 9, and SGB is discussing having several more throughout the school year. The It’s On Us campaign will also be giving out T-shirt decorating kits to student groups to work on during their own events. The kit will include the shirts, some decorating supplies and the facilitation guide, which is for the leader of the group to help start conversation about sexual assault.

“We really want to focus those discussions within student groups so it will be with their peers that they see every day. That will kind of start helping those organic conversations to talk about this kind of stuff,” Butler said.

Last year, It’s On Us’ primary campaign was an 800-foot paper chain made of 4,200 student and faculty-signed pledges to stop sexual assault on campus.

Yoder said SGB events such as the T-shirt decorating help to create a campus-wide support system for sexual assault survivors.

“You don’t realize how many people there are who have gone through the same thing until you all come together,” Yoder said.

First-year computer science and political science major Caroline Wozniak chose to fill up the front of her shirt with a neatly written quote from the John Steinbeck novel, “East of Eden.” Her shirt read, “When a man says he does not want to speak of something, he usually means he cannot think of anything else.” Wozniak said the quote expresses the importance of speaking out about things that aren’t right, such as sexual assault.

“You shouldn’t be afraid to speak up for what’s important to you,” Wozniak said. “That includes your safety and the safety of people around you.”