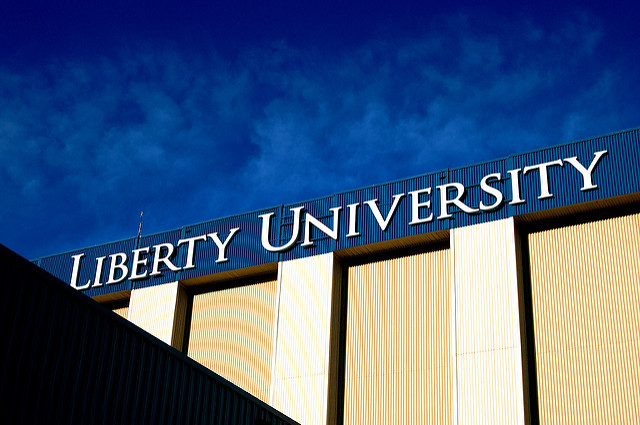 Despite its name, Liberty University seems to think freedom of speech is only worth protecting when students aren’t being “redundant” in how they criticize his chosen presidential candidate.

According to the school’s student-run newspaper, The Liberty Champion, an opinion column critical of Republican presidential nominee Donald Trump’s “locker room talk” was blocked from publication by university officials. Liberty’s president, Jerry Falwell Jr., called the article “redundant” when questioned on Twitter about his decision and dodged questions about why he was involved in deciding whether to run the article at all.

Legally, Falwell is fully capable of cutting the column in question. Because the university is a private institution which does not get government funds, it is capable of restricting free speech on campus. And as the head of the university, Falwell ultimately gets to make those calls — even when they are arbitrary and a misuse of his authority.

The blocked column presents a perspective from the Champion’s sports editor, who argues that Trump’s sexual assault remarks are not representative of how most men treat women. The letter to the editor, which Falwell highlights as covering the same issue, addresses Trump’s remarks as indicative of his inability to lead.

The only commonality between the two stories is Trump.

We’re in the midst of the first presidential election most readers and student paper staff members are old enough to participate in, and this has been the most controversial and emotionally heated election in decades — so the bar for “redundancy” when talking about a main party candidate is pretty high. Two articles don’t meet that bar, as they address different issues related to a candidate for whom there is plenty worth criticizing.

Yet Falwell claims otherwise. Though he is a vocal supporter of Trump in the presidential race against Hillary Clinton, and he has denied a connection between that endorsement and his decision to cut the article, he’s provided no rationale beyond personal judgement.

All the legal protections in the world don’t discount the immorality of an administrative official limiting the speech of students to fulfill an agenda. Even if Liberty University has the freedom to limit speech, it has an equal ability — and a moral obligation — to avoid doing so for hollow reasons.

After publishing our editorial board’s endorsement of Hillary Clinton Tuesday, The Pitt News was inundated with criticism from those who disagreed. Such backlash is simply part of expressing a public opinion, and being an independent paper has allowed us to publish those opinions freely.

Cutting off a dialogue before it can even begin is disrespectful to the Champion’s crop of young journalists and free speech in general. As a university administrator responsible for educating and supporting a group of young writers and journalists, how can Falwell say their writing is only acceptable to the extent that it doesn’t anger the people in his political circle?

For a leader so publicly supportive of conservative values, Falwell seems to care very little about this country’s founding principles.