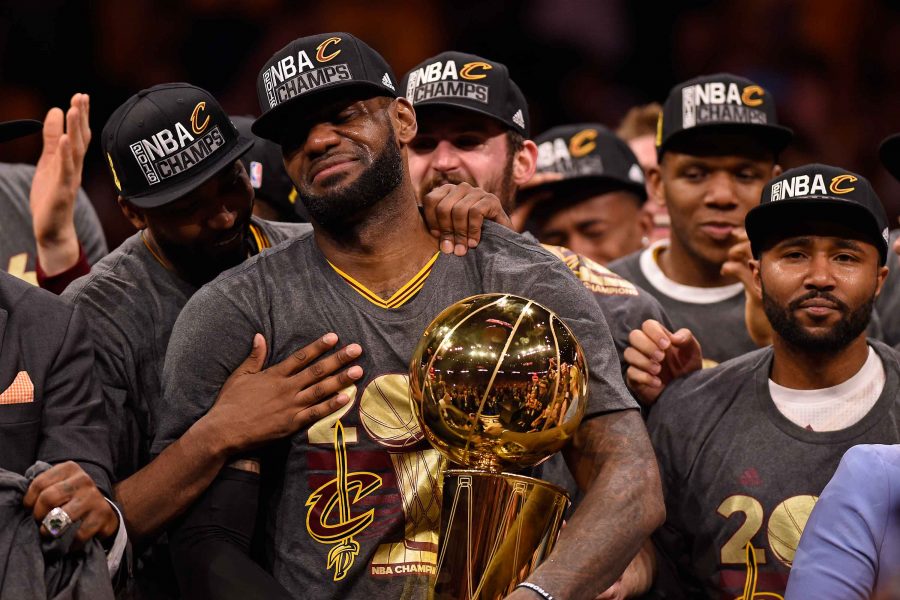 It’s hard to remember a season where so many NBA teams have seemingly so little hope for a championship.

Which is why the prevailing thought Tuesday night at the onset of the 2016-17 NBA season might be: “The Warriors are going to win, so why bother?”

On paper, there are essentially only two teams with any chance to win the NBA Championship: the Golden State Warriors and the defending champions, the Cleveland Cavaliers. The Warriors set a league record with 73 regular season wins last year before losing to the Cavs in an epic seven-game NBA finals then reloaded by adding megastar Kevin Durant in the offseason.

The Cavs don’t boast nearly as much talent from top to bottom, but they still have LeBron James — and maybe that’s enough.

Still, the season isn’t played on paper. Injuries, regression and other adversities strike and change the circumstances. That being said, even with a bevy of talented teams, it looks like the association is on a one-way road to a third straight Cleveland-Golden State NBA Finals.

While they failed to win the Kevin Durant sweepstakes this summer, the Celtics’ offseason has Boston fans primed for the team’s best showing since the “Big Three” of Kevin Garnett, Paul Pierce and Ray Allen disbanded. The Celtics added free agent center Al Horford, one of the best two-way big men in basketball, bolstering an already strong defense into elite territory. The Toronto Raptors are good enough to beat out Boston again for first place, but the addition of Horford and the team’s continued development under head coach Brad Stevens should push the Celtics over the top.

The rationale here is really just one man: James. The 31-year-old’s dominating NBA Finals performance proved that he — not Steph Curry — is still the best player in the NBA. Throw in point guard Kyrie Irving — one of the 20 best players in the NBA — as well as the rejuvenated J. R. Smith and offensive rebounding machine Tristan Thompson, and the Cavaliers have a “Big Four” of their own to match up with the Warriors’ superstar quartet in the West. The Pacers, Bulls and Pistons will all likely fight for playoff spots, but they won’t be able to contend with the Cavs for a division title.

Losing Horford might come back to hurt Atlanta, but the Hawks offset the loss with the addition of mercurial center Dwight Howard. Howard isn’t the same player who led the Orlando Magic to the 2009 NBA Finals, but he is still one of the most effective threats in basketball, having made a career-high 62 percent of his shots in 2015-2016. Howard is still big, strong and freakishly athletic, and pairing him with criminally-underrated power forward Paul Millsap will wreak havoc on opposing frontcourts.

Even after the legendary Tim Duncan’s retirement, the Spurs are still the best of the Southwest Division and one of the few teams in the Western Conference with a chance at knocking out the Warriors. LaMarcus Aldridge should bounce back from a solid but unspectacular first year with the Spurs, and Kawhi Leonard is the best defensive player in the NBA and an underrated offensive force with a legitimate shot at winning the MVP this year. The Houston Rockets may be the only team to challenge San Antonio for the division title, as the combination of new head coach Mike D’Antoni and scoring wizard James Harden could result in one of the most prolific offenses in the NBA.

Russell Westbrook isn’t a basketball player this year as much as he is an anti-hero in a Quentin Tarantino film. Fueled with fiery vengeance against his former beloved teammate Durant, Westbrook is going to scorch the earth or die trying to prove his friend wrong. He’s spent the offseason passive-aggressively trading jabs with Durant, and it is going to be fun to watch that simmering ire manifest itself on a basketball court. The Thunder won’t win the title this year — although Steven Adams’ facial hair should earn them an honorable mention — but Westbrook is good enough to lead his team to 45-50 wins and a division title.

The Warriors are going to be great, right? There’s no way they can’t be. The team has two-time defending NBA MVP, Curry. Golden State also has NBA All-Stars and 2016 Olympic champions Klay Thompson and Draymond Green, and former NBA MVP Durant, who recently joined the Warriors, may be the best of all of them. Picking anyone else to win the division, win the West or finish with the best record in the league is simply oversight. The Warriors are going to be historically excellent, and no one will be able to stop them — at least during the regular season.

This will be the final coronation of James. The greatest player the NBA has seen in 20 years has been ridiculed as not being clutch, slammed for not being as good as Michael Jordan and hammered for trying to take the easy way out in Miami. His return home to Cleveland and NBA Finals victory has alleviated a lot of criticism, but doubt still remains. A final win over this superteam in Golden State would be a clear certificate announcing James as the best basketball player of all time. It’s a perfect storybook ending, and sports have a way of providing those.