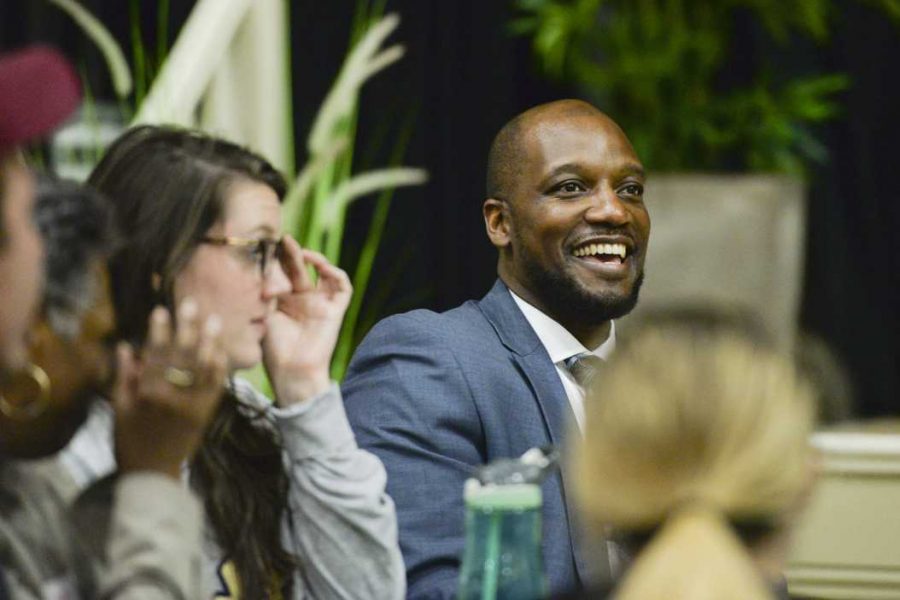 Vice Provost and Dean of Students Kenyon Bonner wrote a letter to Pitt students reminding them to be civil this week, despite clashes between pro- and anti-Trump students on campus.
The first clash between political opponents on campus came last week, on Oct. 26, when the student group Youth for Trump set up a table outside of Hillman Library to garner support for Republican presidential candidate Donald Trump. As they passed out pamphlets and flyers, an unidentified person flipped over their table, spreading papers across the sidewalk, a video posted by the newly-formed online publication The Pitt Maverick showed.

While the group was tabling again Monday, another unidentified person can be seen in a second Maverick video tearing down the Trump supporters’ banner from the tree behind their table. Other students and community members who confronted the tablers in the videos shouted at the supporters from several feet away.

Bonner emailed his letter  to students on the same day as the second incident. But Shawn Ahearn, a Student Affairs spokesperson, said the letter was unrelated to the tabling events.

“Dean Bonner is certainly aware of and concerned about last week’s incident, but that in itself did not prompt his letter,” Ahearn said in an email.

Instead, Ahearn said the letter was an effort to commit to the Pitt Promise, which Pitt students agree to when they enroll. The promise includes six statements, including refraining from disruptive behavior, supporting diversity on campus and valuing freedom of expression.

Pitt junior Marlo Safi, co-founder and editor-in-chief of the right-leaning Pitt Maverick site, said she is not personally a Trump supporter but attended the tabling events to report on any possible violence. Safi has worked as an opinions editor at The Pitt News.

“I was extremely overwhelmed with my own desire to reconcile, to try to post the footage that we had just to kind of get the school to react somehow,” Safi said. “I wanted the school to see what’s happening to conservatives on campus.”

Bonner asked students to remain respectful and direct their political passion into appropriate channels, such as voting on Nov. 8.

“[Pitt’s] diversity is what brings richness to our community and depth to the educational experience we offer,” Bonner said in the letter.

With the contentious election coming to a close in less than a week, Safi said she’s felt targeted due to her vocal support of conservative issues.

After Bonner issued his letter, Safi called the action “noble” and said she appreciates Bonner’s effort to create a campus where students feel comfortable expressing their opinions.