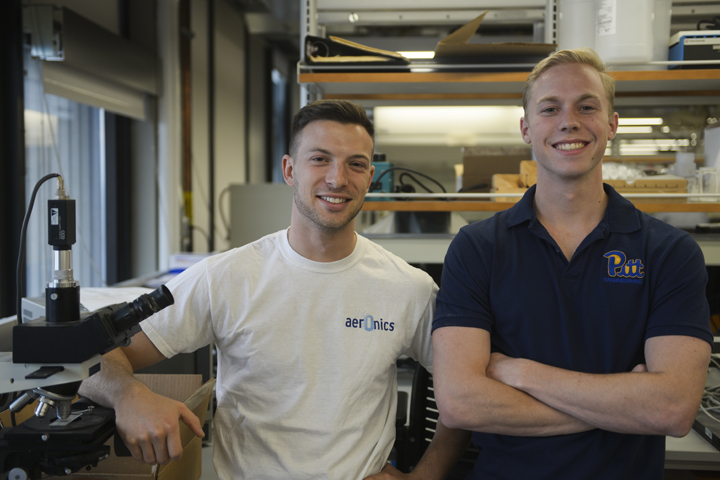 By James Evan Bowen-Gaddy / For The Pitt News

Investors, entrepreneurs and healthcare professionals grilled the team of inventors for hours.

The team –– known as Aeronics and made up of seniors Blake Dube and Mark Spitz, graduate student Alec Kaija and advisor Dr. Chris Wilmer –– had designed and developed an oxygen delivery device and had entered Pitt’s Innovation Showcase to pitch their product.

The device, called Medipod, is a portable, lightweight oxygen-delivery system in the shape of a soda can. The team didn’t expect investors to latch onto it right away.

“I was expecting us to learn about the market but not to win any money,” Spitz said.

But the team ultimately came home with two titles and $25,000 in seed funding, a testament to the team’s self-starter attitude.

The Aeronics team was one of 26 that participated in Pitt’s 15th annual Innovation Showcase. The showcase, which took place Oct. 19 in Alumni Hall, is a chance for undergraduate and graduate students to present new ideas and technology that they have developed with the help of Pitt advisors.

To do this, Pitt added the Kuzneski Innovation Cup to focus on technology outside of the healthcare sphere.

“Pitt has a reputation for life sciences innovation, so we wanted to encourage people who are innovating outside of life sciences to have that opportunity,” Ireland said.

The first place winner of the Kuzneski Innovation Cup won a $10,000 award. The second and third place winners were awarded $5,000 and $3,000 respectively.

This year’s Michael G. Wells Entrepreneurial Scholars Award was the highest yet, according to the Innovation Institute’s marketing and special events manager Mike Yeomans. The scholarship, from Pitt alumni Michael Wells, CEO of Princeton BioPharma LLC, awards $20,000 to the most robust and practical idea, $10,000 to the second place winner and $5,000 to the third.

The Aeronics team placed first in the Wells competition for Medipod and second in the Kuzneski competition for a similar device called Redipod — which uses a lower concentration of oxygen — winning their $25,000 total.

Medipod will most likely be used to treat chronic obstructive pulmonary disease, or COPD, by giving patients easy access to medical-grade oxygen. Redipod, which is more multi-purpose, can be used by first responders, military personnel and athletes in emergencies.

Dube said that people with breathing conditions often have to carry around large oxygen tanks, so the group created a more portable device with a porous lining that allows more oxygen molecules to fit inside.
“If you want to go out to your grandkid’s soccer game or to the store, maybe you grab one of these or a six pack, and instead of lugging around this [tank] in a wheelchair, you just have this thing that fits in your pocket or your cup holder, and it’s a lot easier,” Dube said.

Dube has been working on the idea since his sophomore year. In the summer of 2015, he took an engineering research job studying porous materials with the team’s advisor, Wilmer, who encouraged Dube to try and market his ideas.

“[Wilmer] gives his students a lot of freedom to do the research they want and be the lead on it,” Dube said.

Looking for one more member to join his team and help find a market for his idea, Dube brought on exercise science student Spitz — a friend from his hometown high school in York, Pennsylvania.

With encouragement from Wilmer, the team entered both the Randall Family Big Idea Competition in April 2016 and the Pitt Innovation Challenge in Sept. 2016, winning a total of $50,000 from both to incorporate into and expand their business. Nobody expected the success.

“When we started, we thought, ‘Oh, I don’t even know if we’ll get in. Oh, maybe we’ll get to the second round,’ and we didn’t realize we we’re going to win it until it happened,” Dube said. “We got to work on it and realized that we were working 30 [to] 40 hours a week and realized how much that does for a project.”

With both undergraduate members of the Aeronics team graduating, they plan to make this product their focus post-graduation. Spitz has even decided to forgo his plan for a postgraduate education in physical therapy in the interest of putting his time into Aeronics.

“I was going to be a physical therapy student — [I] had my papers lined up,” Spitz said. “In a two-week period, I decided it wasn’t right.”

In the coming year, the Aeronics team wants to work closely on producing prototypes of Medipod and Redipod. Dube said that the next step is using their award money to come up with a physical product.

“We want something that we can hold in our hands and show to investors,” Dube said.

Both Spitz and Dube strongly said undergraduate entrepreneurship is a possibility for anyone willing to search out an avenue for their ideas and a mentor to push them in the right direction.

“I truly believe anyone can do this. It’s not out of reach,” Dube said. “When you develop your pitch and get it critiqued, it gives you an idea that, ‘this is possible,’ compared to just developing it in your basement and wondering, ‘where do I go?’”

Layer Up took second place in the Wells Competition for a coating that stops the body from negatively responding to surgical implants. Emotion Prosthetics took third for a device that measures the body’s physical reaction to stress.