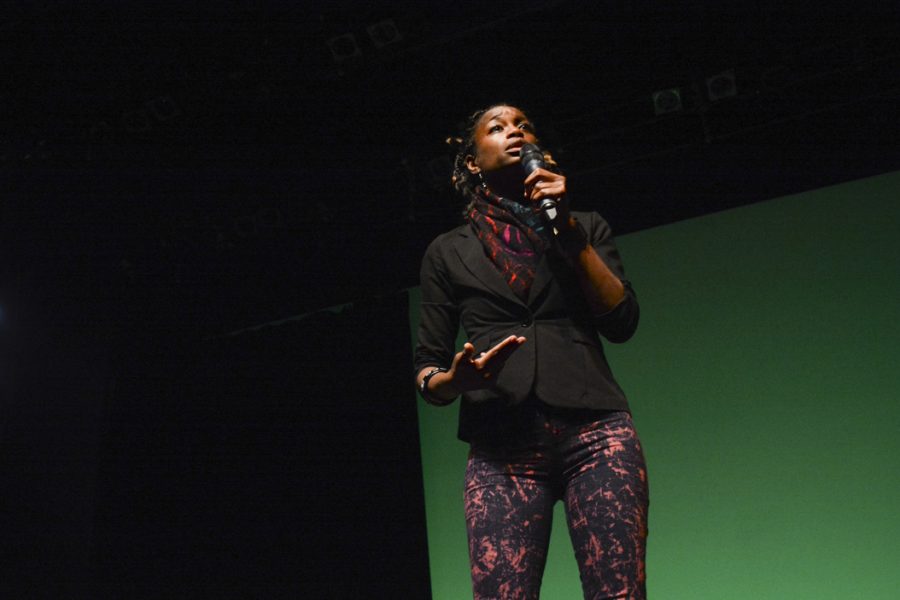 Writer, singer, and social activist YahNe Ndgo took the place of a sick Jill Stein as the headline speaker at an event at the Kelly Strayhorn Theater on Tuesday night | Stephen Caruso, Senior Staff Photographer

A health issue might have stopped Green Party presidential candidate Jill Stein from traveling to Pittsburgh, but her absence didn’t keep supporters from rallying around her platform.

Green Party supporters gathered at 7 p.m. Tuesday night at the Kelly Strayhorn Theater in East Liberty, filling up half of the auditorium. The Green Party of Allegheny County held the rally to garner recognition for Stein and bring her to Pittsburgh for the first time this election season.

But her campaign announced on Facebook on Tuesday prior to the event that a “health issue” prevented her from traveling to the city.

Sans Stein, the evening began with music by Mike Stout, who was announced as a socially conscious singer, songwriter and community leader who has lived in the Pittsburgh area since 1997.

The speakers included Michael Bagdes-Canning — Green Party candidate for Pennsylvania’s District 64 State Representative — as well as the chair of the Hill District Consensus Group Carl Redwood Jr. and YahNe Ndgo, an activist who delivered the keynote speech on Stein’s behalf.

The speakers took the stage in front of a green screen hanging on the back wall and made impassioned speeches in favor of the environment and world peace to a crowd toting signs with the party’s campaign slogan, “People, Planet and Peace Over Profit.”

Since Stein could not be there in person, party representatives projected a campaign video of her in Miami, Florida, from September.

Representatives from the Green Party gave attendees buttons and signs for Stein and her running mate, American human rights activist Ajamu Baraka. The party representatives raffled off a miniature bulldozer that resembled the bulldozer on which Stein spray painted, “I support this message,” in Standing Rock, North Dakota. Stein was charged with vandalism for spray painting the machinery in support of the protest against the Dakota Access Pipeline.

Her supporters said they’d been in similar situations. During his speech, Bagdes-Canning said he had been arrested for trying to crash a Trump fundraiser at the Duquesne Club in September.

He said he wanted to talk to Trump about the lack of clean drinking water in Butler County, a part of his district, due to fracking.

“We need to dump Trump, and we need Jill, not Hill,” Bagdes-Canning said.

The Green Party, along with other third parties like the Libertarian party, are picking up supporters disenfranchised with their choices in this year’s polarizing presidential race.

Republican candidate Donald Trump and Democratic candidate Hillary Clinton have both been criticized from those within their own parties, some of whom don’t ascribe to either candidate.

“We’ve got the Clinton campaign that intentionally elevated Trump. We have Donald Trump because of horrible Hillary Clinton,” Ndgo said.

Emma Alkire, a 25-year-old resident of the Chalfant neighborhood, said she usually votes Democrat but is a Green Party supporter this election. She said she chose Stein based on her opposition to the war and her support of single-payer health care and abolishing student loan debt.

“Even if Jill does not win, I consider anything more than 5 percent for the Green Party [as] a win because it becomes federally recognized,” Alkire said. “My big aim is to break the two party system and introduce a third party.”

Ndgo has been supporting Stein and her running mate since the beginning. She was arrested at Hofstra University for protesting Stein’s absence in the presidential debate in September.

Ndgo talked about her experience targeting several issues with the Stein-Baraka campaign in California, Arizona and Montana. She touched on the Black Lives Matter movement, immigration and hunger but placed particular emphasis on her opposition to war.

“I go around telling people that there are four candidates running, and my daughter says ‘Mom, shut up,’” Ndgo said. “And I say, ‘I don’t want you going to war.’”

Ndgo warned the audience not to put their lives on the line for other people’s profit and admonished the current governmental system.

“We have a government that is representing nothing that matters,” Ndgo said. “But we have a candidate that knows the truth.”

Editor’s Note: A previous version of this story misreported the location of the Kelly Strayhorn Theater. The Theater is located in East Liberty. The Pitt News regrets this error.