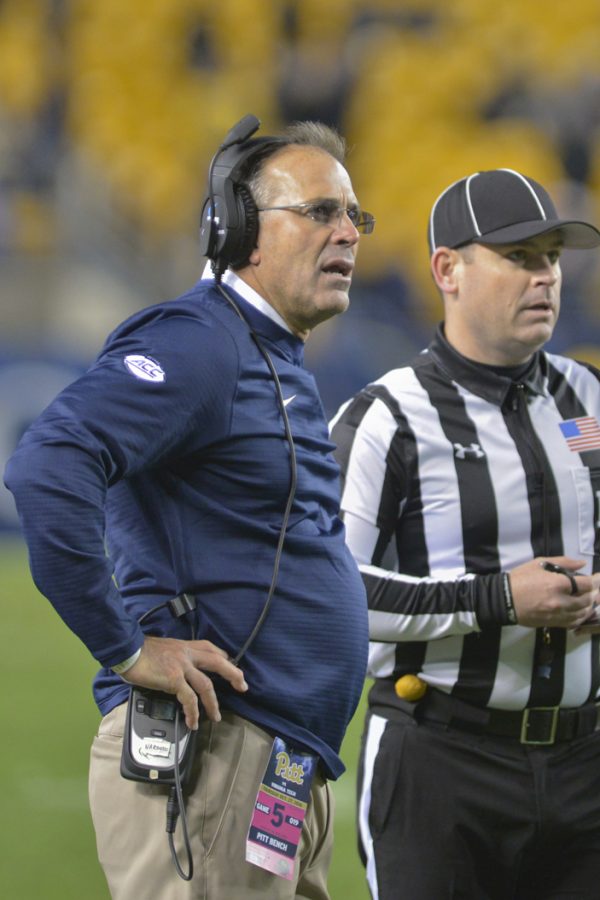 The Pitt football team and head coach Pat Narduzzi have taken a lot of flak for the way the defense has performed this season, especially when defending opponents’ passing games.

Despite the criticism, Narduzzi made a couple of late-game decisions Saturday against Miami that required a lot of faith in his defense. The problem is, he may have shown too much faith.

With under nine minutes left in the fourth quarter, Pitt trailed by 13 points. After a 1-yard gain by running back James Conner, the Panthers faced fourth-and-1 at their own 10-yard line.

Rather than give one more handoff to the team’s All-American tailback and trying to pick up one yard behind All-ACC offensive linemen Adam Bisnowaty and Dorian Johnson, Narduzzi decided to punt the ball back to Miami.

The Hurricanes then put together an eight-play, 41-yard field goal drive to extend their lead to 16. More importantly, they milked almost five minutes off the clock, and Pitt got the ball back down 44-28 with only 3:21 left in the game.

After a 5-yard scramble by quarterback Nathan Peterman and two incompletions, the Panthers faced a fourth-and-5 on their own 16-yard line with less than three minutes left. Although the team still needed two touchdowns and two successful two-point conversions just to tie the game, Narduzzi again gave the ball back to the Hurricanes.

Narduzzi attempted to rationalize the decisions Monday at his weekly press conference.

“We had three timeouts left, OK?” Narduzzi said. “I mean, if you go for it and you don’t get it, and you had three downs already to get 10 yards … you might as well just grab a knife and stick it in you right then and start twisting it and pull it out, in my opinion.”

While Narduzzi believed going for it on fourth down and failing to convert would have been coaching suicide, all the Panthers needed was five yards to keep the game alive. Instead, he gambled on his defense.

“I’ve got faith in our defense,” Narduzzi said. “They ran the ball three times like we wanted them to. We had a chance to make a play in the backfield on third-and-3, call another timeout and we get what we want. And maybe Quadree [Henderson] takes one to the house, and then you kick an onside kick and you’re good.”

But Henderson never got the chance at another return touchdown, and Chris Blewitt never got a chance to attempt an onside kick.

After the Panthers held Miami running back Mark Walton to two rushes for 7 yards on the first two plays, Walton broke loose for a 55-yard touchdown on third down to seal the victory for the Hurricanes in what turned into a 51-28 blowout.

“Now if I had known they were going to score, like the armchair quarterback guys … then I would have said shoot, might as well just have an 18-yard run instead of a 55-yard run,” Narduzzi said.

Nobody knew Miami was going to score, but that’s not the problem — the problem is expecting to force a three-and-out on defense, score two touchdowns and tack on two successful two-point conversions in less than three minutes, which is simply unrealistic.

But Narduzzi said he had no regrets about the crucial calls.