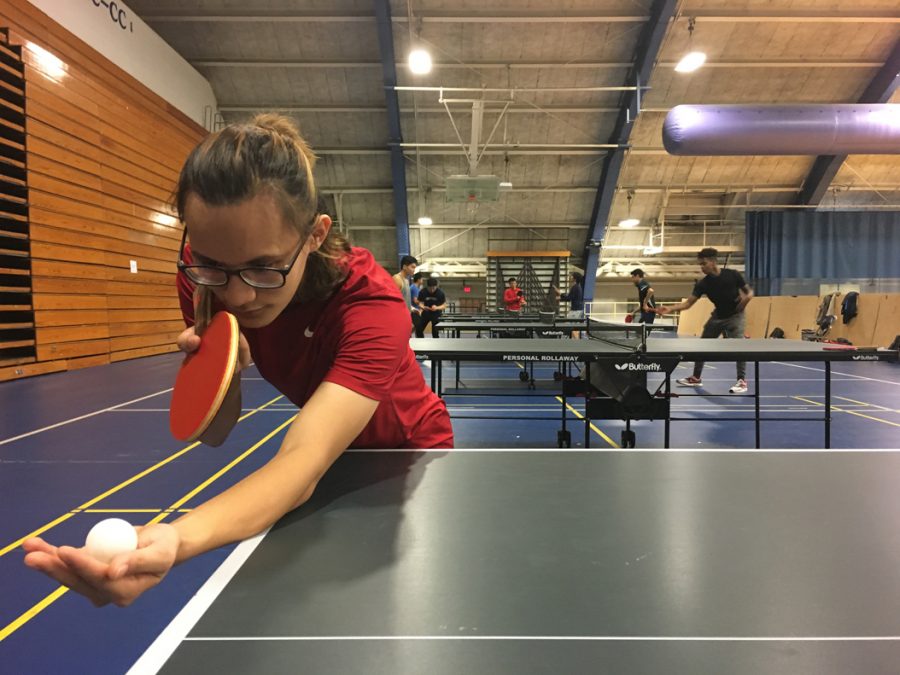 When Sinha started at Pitt this fall, his go-to icebreaker was that he was a pingpong player. His fellow first-years weren’t impressed — they asked him if there was something else he could do with his time.

Instead of telling his Tower C floormates that he beat someone in the USA Table Tennis Men’s Top 50 in July or snagged a game from an Olympian in high school, Sinha left it to a bet: $100 to whoever could defeat him.

“I don’t mind people who give respect to a sport,” Sinha said, “but people who think that, ‘Oh, this is easy,’ or ‘I can beat everyone’ — those are the people I beat the hardest.”

Sinha, whose coach growing up taught him to not let his challengers score a single point if possible, crushed everyone who was foolish enough to meet him at the table. Easy wins.

The group, formed three years ago, has 30 active members, ranging from competitors like Sinha — who enter national tournaments in hopes of increasing their USA Table Tennis ranking — to players who just want to socialize and learn more about the game.

Kevin Jiang and Howard Chu, Pitt Ping Pong Club’s co-presidents, said they’re trying to take the club and its players from a recreational sport to a competitive one this year. That means entering more tournaments put on by the National Collegiate Table Tennis Association and training members to beat schools including Penn State University and University of Pennsylvania — both of which have coaches and hold tryouts for their teams.

At Pitt, that’s a little tricky — the interest level in the sport isn’t high enough to hire a coach and be choosy about who joins the club. But that hasn’t stopped the squad from challenging other universities.

Two weeks ago, the Pitt Ping Pong Club traveled to Philadelphia to compete at an NCTTA event at Trolley Car Table Tennis Club, where the club faced off against nearby schools including PSU, Penn, Temple University and Rowan University. Competing at events like this helps the squad qualify for regionals, which will be held at PSU in January.

Thai Nguyen, a sophomore pre-pharmacy major and Pitt Ping Pong Club’s vice president, matched with a player from Temple for the first game. Nguyen made quick work of his foe, who may have underestimated him — Nguyen’s improved since his rivals saw him last year, training in Vietnam and a Pittsburgh-area pingpong club since then.

He almost demolished Penn State as easily, but his opponent quickly caught on to Nguyen’s signature backhand, which spins differently with each hit.

“I think pingpong is about reading people, too. And it’s about speed and knowing what the ball is doing,” Nguyen said. “It got messy. He read my serve, and he was doing really well with it. And he could destroy me.”

With strong performances by Sinha and Nguyen, Pitt finished third out of six schools — a promising showing in advance of January’s tournament at Penn State.

Until then, the club will continue to meet on the second floor balcony of the Fitzgerald Field House on Thursday nights. The hope is that Sinha, Jiang, Chu, Nguyen and a grad student named Yuqing Wu, who started training in China at around four years old and came one step away from playing for the national team, can finally beat a powerhouse school like PSU or Penn.

If you walked in on one of the club’s training sessions, it would be easy to make the same mistake as Sinha’s Tower C challengers. At first glance, the skill level looks more basement back and forth than the exchange of bullets you see during off-hours Olympics programming.

In the United States, most associate pingpong with game room fare like air hockey and foosball. But in China — where some of the club’s players are from, like Chu and Wu — it’s a highly-competitive Olympic event. Since table tennis became an Olympic sport in 1988, China’s dominated the field, winning 53 of the 100 awarded medals.

At the start of Pitt Ping Pong Club’s 6 p.m. practices, it’s unclear at first whether the members are there for some after-class fun, or it’s game time — they’re all straight-faced for the most part.

Nguyen changes into gym shorts, ties his long, brownish-blonde hair into a ponytail and starts shuffling along the court. A couple players pick up paddles and start trading shots faster and faster until the tables fill and the entire gym rings with clink, pop, clink, pop.

Chu faces Jiang, president vs. president. Jiang’s style is aggressive — he tries to win his points within the first three hits — which matches well with defensive strategy of Chu, who hangs back and redirects Jiang’s attacks once the pace speeds up.

As Chu and Jiang warm up, the duels get longer, the returns harder to defend. During a seven-hit rally, the duo inches away a few feet from the table until it becomes an island caught between warring battleships. Chu rockets the ball past Jiang’s head and misses the table.

“A lot of people say that table tennis isn’t a sport because you just kind of stand there, you’re within a really small vicinity,” Chu said. “But when we get into hardcore training, when we’re just doing rallies, getting used to the motion, we get really sweaty.”

At another table, Nguyen — who played table tennis in Vietnam before moving to the United States in high school — practices spin and curve shots, chopping at the ball when it meets him. Miguel Xu, a first-year computer science major, simply watches his teammates practice from the sideline, transfixed by the metronome-like rhythm of each rally.

“It’s very intimidating. Even if you think you can beat them, you can’t,” Xu said. “Even though it looks like they’re [playing to their best ability], sometimes they’re just practicing, and they don’t show how they actually play in the real league.”

For Xu, pingpong is the everyman’s sport, rewarding practice and concentration over athleticism. Many players, like Sinha and Nguyen, either hired coaches or trained at a facility to drastically improve their game without hitting the weight room every day.

“Unlike other sports, you don’t have to be very tall to play,” Xu said. “Imagine basketball: If you are short, you’re dead. People are just going to dunk on you here in the U.S. But this one is not based on how tall or how muscular you are — it’s about how much skill and how much practice you’ve put in.”

Everyone in the group has something to play for.

Xu wants to compete in an NCTTA event by his senior year. Sinha’s dream is to play in the 2024 Olympics.

Jiang started playing pingpong at 13 when his family put a table in the basement. Jiang and his father — complete beginners at the time — just hit a ball back and forth, getting better with each year. Even though Jiang was the club’s best player until Sinha joined, he said his dad is more interested than he is in the sport.

But when asked if he could beat his father, Jiang paused, flashed a grin, then quickly returned to the same stoic, poker-faced expression he wears when he plays.