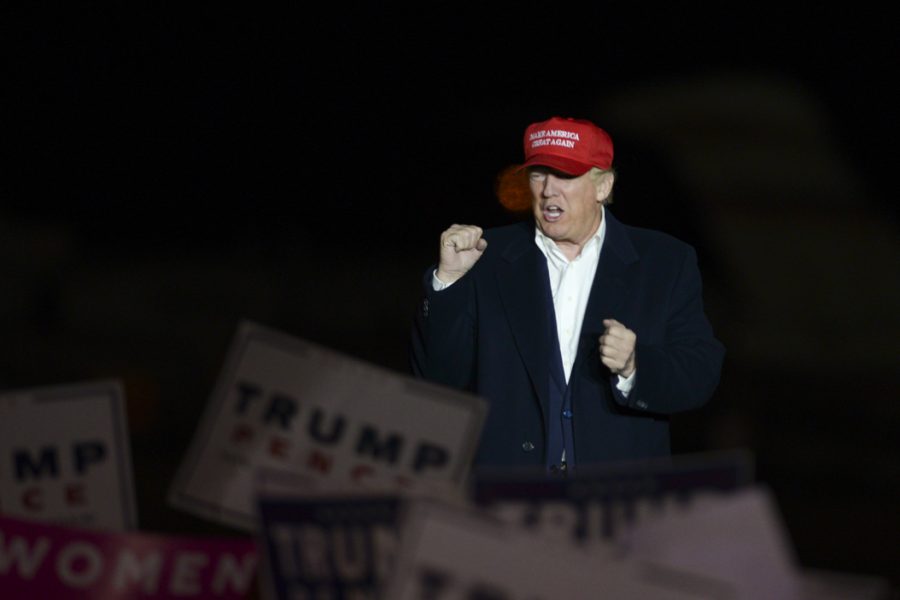 Trump was two hours late to the rally so he spoke briefly. “We have the greatest movement in the history of this country,” Trump said.

By The Pitt News staff

It was announced shortly before 3 a.m. Wednesday morning that reality T.V. star and real estate mogul Donald Trump will be the next President of the United States.

But at 2 a.m. Wednesday morning, the most contentious race of this election was still too close to call. It was almost certain the race would tilt to the business mogul and reality television star, as he only needed six electoral votes to reach the 270 tipping point.

Throughout the night, as the polls came in, and the map began to bleed red from North Dakota to Texas, an election that to many seemed like a surefire Clinton victory began to slip into uncertainty.

Michael Walczak, a first-year mechanical engineering major, said Donald Trump’s national lead was “quite shocking,” despite his own political leanings.

“I still am a Trump supporter, but the way things were going within the past few weeks, it didn’t look very well for him,” Walczak said. “So I will admit that I had my doubts, but I will tell you right now, it’s shocking what I’m witnessing.”

Other students, though, began gathering on Bigelow Boulevard to protest at about 1:30 a.m. For students on campus who identify with minority groups that Trump has threatened, his lead in the electoral college at that point was beyond a simple political concern.

Aya Shehata, a sophomore double majoring in psychology and sociology and the social chair of Pitt’s Muslim Student Association, was shocked. On Tuesday night, she sat in her apartment trying to study for a psychology exam, despite the distress she felt as the election reports poured in.

Shehata, who wears a hijab, said a Trump win will make her fear for her safety.

“I’m scared to leave my apartment building to take my exam,” Shehata said. “I’ve got the signs right on me — screaming out ‘Muslim’ — and I don’t know what to expect.”

Shehata and her friend Zuri Kent-Smith — a sophomore economics major — started a petition to have exams moved so that students’ grades won’t suffer as a result of the election. As of 2 a.m., nearly 900 students had signed it.

Because she lives on a college campus and in a city, Shehata said she has hopes that others will be understanding. Shehata worries that her identity as a female minority group will prevent her from getting a job during the Trump presidency, but said she has faith that no one will be discriminated against without the consent of the public.

Women, Hispanic citizens and Muslims have been victim of the brunt of Trump’s more vitriolic comments this election season. But on campus, even Trump supporters who fell into one of those groups remained faithful.

Ashley Ward-Willis, a sophomore studying political science, said that although she supports Trump’s policies, she does not condone any of his racist or sexist comments.

“Everything he said that’s racist and offensive and sexist and misogynistic and xenophobic ––   we don’t condone that at all,” Ward-Willis said. “The election comes down to policies and real factual matters and not just emotions.”

Trump has campaigned on a far right platform, focusing on strict immigration reforms, increasing international issues of security and renegotiating trade deals to improve the country’s position in international deals.

Nearing 2 a.m., pundits on national broadcast channels said the election results were standing in “suspended animation,” leaving Pitt students at watch parties quite literally on the edges of their seats.

As the election results unfolded, students gathered at friends houses or in groups around campus to watch the polls together.

Pitt’s Black Action Society hosted its own watch party with about 80 students that was riddled with shouts, of both excitement and fear as Trump moved closer to the presidency.

Robert Gartei, a senior studying Anthropology and Africana studies, said the issue in this election is with the American education system, as opposed to being a simple matter of political ideologies.

“Trump is speaking from a position of ignorance to people who are ignorant. The public school system doesn’t teach Americans to think critically, they teach them to ingest stereotypes,” Gartei said. “That’s how we have Trump. If we teach people to engage others with a different perspective and how to understand perspectives different from their own, we wouldn’t have as many conflicts.”

Aminata Kamara, president of the Black Action Society, said her heart was hurting as results rolled in from Ohio and Florida.

“Trump winning would be a slap in the face to black people in America,” Kamara said. “It’s demoralizing that someone who has insulted multiple groups in America could become the Commander-in-Chief.”

While Trump supporters were the minority on Pitt’s campus, and in Pittsburgh, his voter base was spread across the city.

John Delallo, a 67-year-old Vietnam War veteran, went to John McMillan Church’s this morning at 7 a.m. to work at its polling station, he was surprised to see over 150 people in the church’s vestibule that early.

“If there’s any salvation to the boorish behavior of Trump, and the lies of Hillary Clinton, it encouraged very likely the largest voter turnout ever,” he said.

At a Republican watch party in the South Hills, 57-year-old Sofia Janis of Upper St. Clair cupped her hands over her cheeks when Trump won Florida, a smile forming as she stared at the screen where results were displaying .

“Of course I was very happy, but more in disbelief that this is actually happening,” Janis said. “The people have spoken tonight.”

Other groups — and Hemingway’s Cafe, where TVs played the Penguins game instead — decided to steer clear of watching the election.

The Rainbow Alliance office in the William Pitt Union hosted about 10 students for an election-free zone.

“I think this is an important space for people who care too much,” said sophomore Kayla Bradley, who was attending that night. “Especially if you get emotionally invested, it’s good to tune out for awhile.”

Bradley voted in the election but felt it was nice to not have the election constantly in the back of her mind. She occasionally drifted into the other room to check results, but promptly returned to the election-free zone to color and talk to fellow students.

President Peter Crouch wanted to make sure that anyone who didn’t want to get wrapped up in all the commotion of the election had a place to be with people who felt the same way.

“As far as the LGBT community goes, there is so much that is political,” Crouch said. “These are big issues, so it matters who is in charge of making those decisions.”

Blaise Beebe, a first year philosophy and politics major, said that to him, Trump’s policy will ultimately be unifying.

“We have to include everyone but we can’t always just surrender to a politically correct agenda,” Beebe said.

In the final minutes of the polls, Chelcie Alcorn, a senior psychology major, said her faith in polling has been destroyed because polls predicted Clinton for the whole electoral map and for Pennsylvania.

“I’m just really upset right now,” Alcorn said, her voice cracking. “I’m ashamed and disappointed. I’m hoping that we can come together and make a better tomorrow out of this and people will learn that their vote actually does matter.”

Ward-Willis said she understands how hard it must be for people who did not support Trump to see his victory.

Ultimately, she said the results were indicative of the state of America.