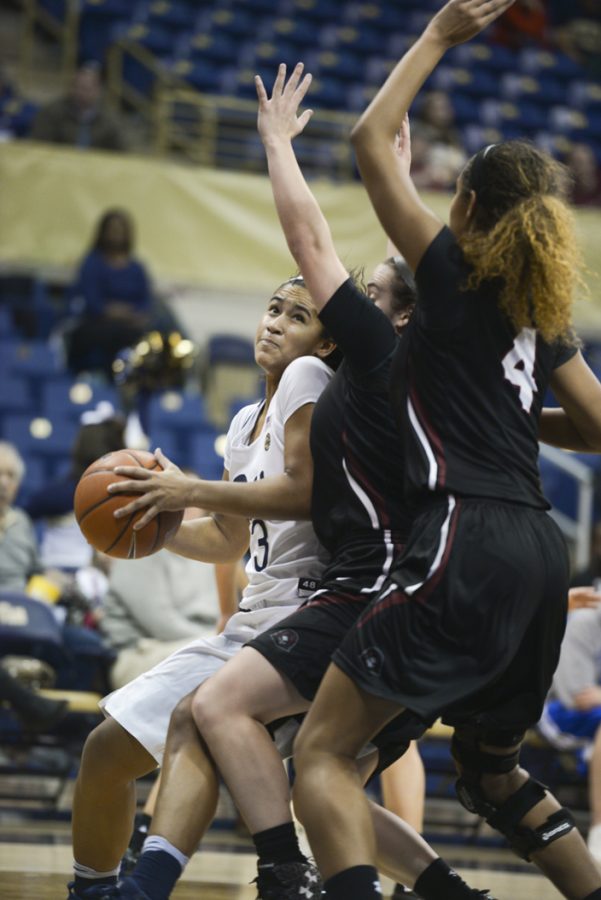 Many fans and analysts wondered how the Pitt women’s basketball team would deal with the offseason transfers of forward Stasha Carey and guard Fred Potvin.

If the Panthers’ regular season opener Saturday vs. Mount St. Mary’s is any indication, recruiting first-year guards Jasmine Whitney and Alayna Gribble was a good place to start.

Whitney led the team with 17 points and 11 assists while sophomore forward Kauai Bradley tallied 16 points and 10 rebounds, each notching the first double-double of their college careers. Gribble added 16 points off the bench in Pitt’s season-opening 89-54 win at the Petersen Events Center.

McConnell-Serio decided to roll with two point guards to start the game, giving Whitney the start in place of Gribble, who started the Panthers’ exhibition win against IUP. If Whitney was caught off guard by the switch, she didn’t play like it.

“I was not expecting [to get the start]. We found out right in the locker room before the game,” Whitney said. “I was just excited to get out here and play.”

Harvey-Carr rebounded her own miss and converted a layup to start the scoring. She then committed her second foul less than four minutes into the game, and 6-foot-1 forward Kalista Walters took her place off the bench.

The next time down the floor, Whitney drilled a 3-pointer from the corner to give Pitt a 9-6 lead. Mount St. Mary’s guard Mikal Johnson hit a three of her own to tie the game, but Whitney responded with another make from beyond the arc to make it a 12-9 Panthers lead.

Gribble came off the bench after a Mount St. Mary’s timeout midway through the first quarter and quickly got into a rhythm.

The 6-foot guard followed a layup by draining a 3-pointer to extend Pitt’s lead to 20-13. She missed a pair of threes on the Panthers’ next two possessions, but Whitney added one more triple before the end of the first quarter to make it a 10-point game heading into the second.

Whitney picked up right where she left off to start the second quarter, crossing over and zig-zagging through The Mount’s defense for a hard-earned layup. After a Mount St. Mary’s turnover, Whitney assisted Bugg on an open jumper to push Pitt’s lead to 14.

Two possessions later, Bugg returned the favor, assisting Whitney on her fourth 3-pointer of the game. Mount St. Mary’s tried to counter with a layup, but Walters came soaring in for an emphatic block to the delight of the crowd.

The Panthers continued to play suffocating defense and knock down open shots on their way to a commanding 43-20 halftime lead.

After dominating the glass with eight rebounds in the first half, Bradley decided to get more involved in the scoring.

After making her first six attempts, Whitney finally missed her first shot as a college basketball player on a contested layup with just over a minute left in the third. Still, the Panthers maintained complete control of the game and led, 65-42, going into the fourth.

Pitt was able to rest most of its starters in the final quarter and cruised to an 89-54 win to start its season.

“It was fun to coach,” McConnell-Serio said. “I hope every game is like this.”

The Panthers will next host Youngstown State at the Pete at 11 a.m. on Monday, Nov. 14.