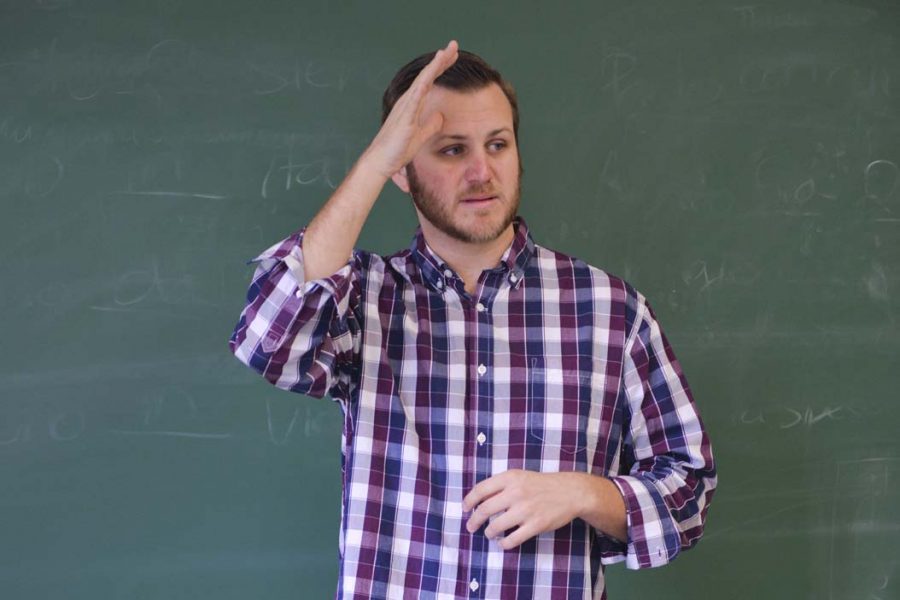 Kenneth DeHaan wants to be able to enjoy a night out at the movies in Pittsburgh — so much so that he’s willing to go to court for it.

A self-proclaimed “cinemaddict,” DeHaan, who is an American Sign Language professor at Pitt and is deaf, recently filed a lawsuit against Cleveland Cinemas and the Soffer Organization, the owners of SouthSide Works cinema, for not providing the proper equipment needed to display captioning on movies for deaf moviegoers.

DeHaan said SouthSide Works is the closest theater to his home.

DeHaan said he did not wish to disclose which movie theaters he often visits because of the pending lawsuit.

According to the lawsuit, the theater’s refusal to provide captioning violates Title III of the Americans with Disabilities Act.

The ADA is a civil rights law signed in 1990 that prohibits discrimination against individuals with disabilities in all areas of public life, including jobs, schools, transportation and all public and private places that are open to the general public. Title III of the ADA deals specifically with public accommodations –– such as movie theaters –– and services operated by private entities in ensuring they provide equal access for all consumers.

Currently, Title III requires that a public facility provide accommodations for people with disabilities, which means that the SouthSide Works theater should provide an option for deaf or hearing-impaired individuals, such as on-screen captioning.

But the Department of Justice has proposed an amendment to the act, that has not yet been finalized, specifies that all capable theaters must be capable of providing closed-captioning. While on-screen captioning appears on the main screen for all moviegoers to view, closed-captioning is displayed on a personal screen only for the person who needs it.

A notice on the DOJ website states the proposal is meant to allow people with hearing or vision disabilities to “attend movies with closed captioning or audio description in theaters across the country on a consistent basis.”

In the proposal, the DOJ estimates that the average first-year capital cost for a digital single screen theater to comply with the ADA was about $3,200.

Marc Charmatz, an attorney with the National Association of the Deaf, said the ADA already requires theaters to display captioning in some form, even without the proposed amendment.

“While [the] DOJ hasn’t finalized their regulations yet, we don’t think that ought to stop theaters from adhering to federal law and providing captions,” Charmatz said.

According to DeHaan’s lawsuit, filed in October 2016, he has requested in person several times that the defendants provide captioning at SouthSide Works, but the theater has refused to provide any aid for deaf individuals, including closed- or on-screen captioning.

A SouthSide Works manager said she was unable to comment on the lawsuit or the reasons for not having captioning. Ten calls made over a period of three days to both President Jonathan Forman and Director of Marketing David Huffman of Cleveland Cinemas were not returned. The Pitt News was unable to reach an employee from the Soffer Organization, the company that owns the cinema, after calling three times over a period of five days. A secretary answered each call and did not follow-up with The Pitt News.

In Pittsburgh, both the NAD and Stein & Vargas, a civil rights firm based in Frederick, Maryland, are representing DeHaan in the lawsuit. Mary Vargas, a partner at Stein & Vargas, said the case has little to do with money and is instead about access.

The six other theaters are all located in Ohio, with Tower City Cinemas in Cleveland providing closed-captioning equipment as well as assisted listening and descriptive video equipment, according to the company’s website.

Other movie theaters in the Pittsburgh area do provide captioning or other forms of accessibility for deaf moviegoers, including Carmike 10, the Row House Cinema and Rangos Cinemax Theater at the Carnegie Science Center. According to Andy Hennon, operations manager at Carmike 10, the theater has had captioning equipment at least since he arrived three years ago.

“It’s a device called Captiview. The person watching the movie gets a small screen that has the captions show up on it. It’s propped on a wire attachment that they can clip to their cupholder,” Hennon said. “We get at least one or two people a week who use it.”

Steve Kovac, director of operations and visitor services at the Carnegie Science Center, said their current theater does not have the proper technology to provide captioning. Instead, they have typed scripts that follow the movies and a space for sign language interpreters in the theater.

The center’s theater is set to be redone starting in August of 2017, with the new theater opening next fall, according to Kovac. Besides replacing the film-based model with digital technology, the center is also seeking to address concerns about access.

“We’re getting the newest technology for the new theater, and that includes captioning equipment,” Kovac said. “We want to make the experience better for our visitors who are hearing-impaired or deaf.”

Michael Stein, Vargas’ partner and a deaf individual, said the firm has dealt with other cases involving theaters as well as general lack of accommodations for people who could benefit from closed or on-screen captioning.

“We have done cases involving the lack of captioning, refusal to provide interpreter services, employment discrimination and courthouse access,” Stein said. “We have done several movie theater captioning cases with the result that the theaters installed captioning.”

According to Charmatz, providing deaf individuals with equal access to films is the theater’s responsibility since all films come with captions when released. The theater itself needs to provide the equipment to go with it.

“What’s popular with hearing folks is popular with deaf folks, and they’ve got a right to enjoy popular entertainment,” Charmatz said. “We need to make sure that movie theaters are understanding that, too.”