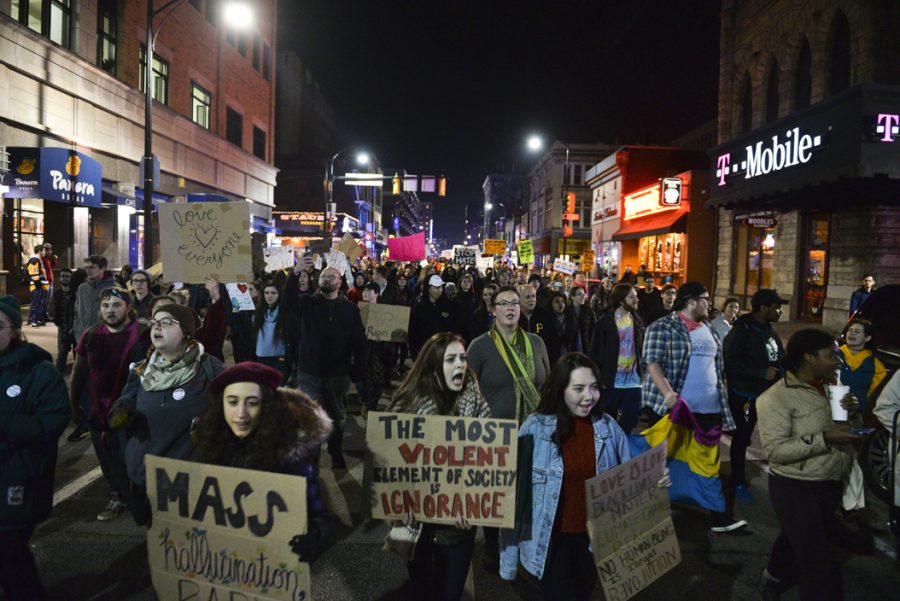 The protest was peaceful, with no arrests and little drama aside from loud chanting of "this is what democracy looks like" or "No KKK, no racist USA, no Trump." Stephen Caruso | Online Visual Editor

Pitt students and community members held homemade signs high into the air above the Cathedral lawn –– “Erase hate,” “We all come together,” “If you’re not outraged, you’re not paying attention,” as they marched to encourage positivity in the future after the election.

The march began at 9 p.m. as a peaceful reaction to the results of the 2016 presidential election. Over 700 students and Pittsburgh natives from all walks of life banded together to march from Oakland to the Birmingham Bridge and back. The crowd listened as fellow students spoke promoting diversity, LGBTQ+ and women’s rights and religious tolerance.

While many of the protests that  have taken place since Election Day have been directly in response to the election of Donald Trump, this march was meant to focus on a positive, uplifting message.

“Pitt Protest,” a group of five first-year students organized the event after they attended the post-election rally in Oakland last Tuesday night. Ebenezer Queen, a first-year nursing major, said the protest Tuesday was a good way to “express our emotions” but he didn’t feel that anything was truly done. This time, he wanted to focus more on the positive.

“Since this election, even before, we’ve had so much anti-this, anti-that. We haven’t had any positivity … we’re going to need that to get through the next few years,” Queen said.

Scott Gill drove an hour with his daughter to come protest, toting a sign promoting economic justice, because he said being silent would only endorse President Trump’s ideology. Still, he found it hard to follow the strictly optimistic outlook of the protest.

“It’s hard to stay positive when what we believe is so the opposite of Trump,” Gill said.

Lauren Butler, a sophomore at Pitt, said she attended the march specifically in the name of equality –– especially those Trump openly speaks out against.

“I’m fortunate enough to have my voice heard,” Butler said. “And the people who can be heard need to stand up for those groups whose voices cannot be spread.”

As the students marched down Fifth Avenue toward South Side, drum beats rang as their chants cut across the night –– “We are unstoppable, another world is possible” and “Our body, our choice.”

As students attempted to cross the Birmingham Bridge, police barricaded their path and informed the protesters that they could not enter South Side. With the entrance blocked off, it became clear that the march would come to a halt –– so the protesters sat.

For the next half hour, they waited on the cold pavement, not knowing where they would go next and altering between booming chants and inaudible speeches for protesters stuck on the peripheral of the paused march.

Students stood on the median of the bridge and shouted out their speeches, everyone holding their fists in the air.

“I still have faith in this country. I know there are good people. Look how many good people are here,” one Pitt student said through a megaphone to the crowd.

After half an hour, however, the speeches died down and the protest began to turn to quiet mutters and personal conversations about Trump.

Anika Shah, a Pitt architecture and sociology major, said now that Trump is elected, she feels confused because his actions are so at odds with her values growing up.

“You’re taught not to fight when you have an argument, to settle things rationally, so why is it OK for our leader?” Shah said. “How are we supposed to behave?”

Between the chilly fall weather and the unexpected, diverted route, some were disappointed in how the protest shaped up. Dan Finegan, a Pitt graduate student studying social work, said he would have left if it were not for other protesters pressuring him to stay out of solidarity.

“I’m a little disappointed to be honest,” Finegan said. “I can’t hear anything. Not as many people would have gone if they said we’re going to a bridge instead of the city.”

Finally, police carved a path back along Forbes Avenue, and the protesters returned to Oakland where some onlookers cheered from bus stops while others booed from apartment windows.

Both responses served to increase the energy and the volume of the march as it reached the Cathedral.

To close the night, Gill emphasized the importance of being vocal.