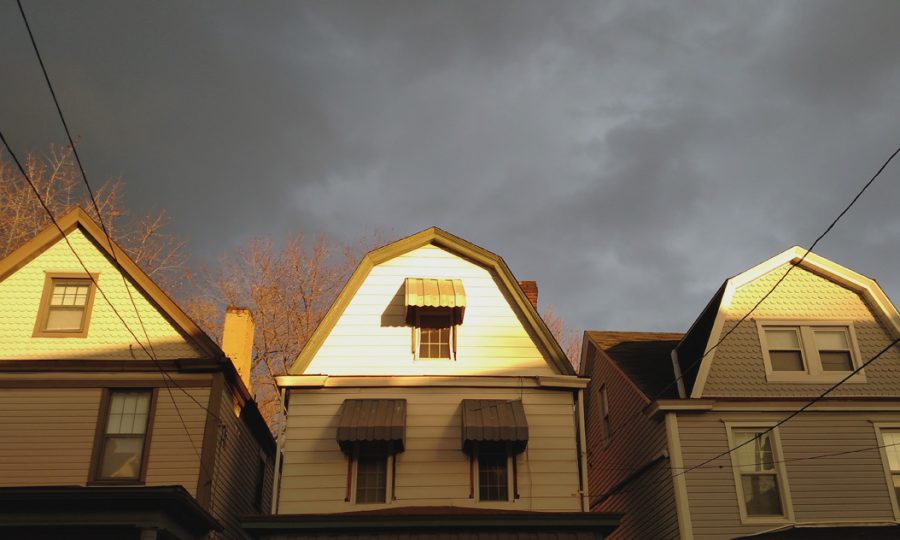 When Mischelle McMillan was a teenager growing up in early ‘70s Pittsburgh, she lived among rats, roaches, mold and sparking electrical plugs.

McMillan said she lived in unsafe and unsanitary housing with her family because it was all they could afford. After moving from Mon Valley to Uptown, McMillan — now 60 years old — is still living in affordable Pittsburgh housing.

According to Malcolm Torrejon Chu, a member of the National Homes for All coalition, rising rents, gentrification and a shrinking pool of landlords and companies with control over an increasing number of properties are some of the causes behind the affordable housing crisis both in Pittsburgh and nationwide. Because of the crisis, many people are unable to afford decent homes and are forced to find cheaper housing in unsafe environments.

“Low-income groups are the most at risk,” Chu said. “People of color, single moms and the elderly are groups that are often forced to live in harsh conditions.”

Activists, scholars and Pittsburgh community members gathered in front of Posvar Hall on the morning of Nov. 11 for a press conference by the Pittsburgh Housing Summit. The Summit kicked off on Wednesday afternoon and continued throughout the weekend with panels, workshops and discussions focusing on the affordable housing crisis and its effects on Pittsburgh, the nation and the world.

The global studies center co-sponsored the summit, and Jackie Smith, a sociology professor and member of the Pittsburgh Human City Rights Alliance, coordinated it.

“Pittsburgh as a community needs to get out the word that housing is a right, not a privilege that goes to the highest bidder,” Smith said at the press conference Friday afternoon.

According to the Affordable Housing Task Force’s May 2016 report, in Pittsburgh there is a shortage of approximately 17,241 rental units that are both available and in a reasonable price range for households at or below 50 percent of the area’s median household income. The report cites broad economic trends, such as a growing preference for urban living and working and increased competition for residential and commercial space, as causes of the decrease in affordable housing.

“Concurrently, an economic shift toward the service sector, a widening wage gap and slow growth in real wages across the country have created conditions that make paying for housing more challenging for an increasing portion of the country’s population,” the report said.

McMillan said she came to the Housing Summit to call attention to the poor housing in many Pittsburgh communities and to meet other individuals working to improve their neighborhoods.

McMillan and her neighbors formed the De Ruad Residence Council in Uptown in 2013 to fix the problems themselves. Together, they pool funds and appeal for grants from community and government programs to raise money to address their needs.

“We try to getactual professionals in to fix up our utilities, and whenever we get a new resident, we welcome them with cleaning supplies and a list of local cleaning and handyman services and the like,” McMillan said.

In addition to issues with utilities and cleanliness, the housing crisis has led to homelessness, housing instability, the “doubling up” of two or more families in one house and gentrification, according to Desiree Fields, an urban geographer and lecturer at the University of Sheffield in South Yorkshire, England.

While the housing crisis primarily affects low-income families, the middle class also suffers repercussions through negative equity ––  which occurs when the assessed value of a home falls below the amount still owed on the mortgage. Negative equity, combined with a severe loss of mortgage credit available for borrowers to pay off debts, can leave members of the middle class unable to afford new homes. Younger generations, including college students, also feel the effects of the crisis.

“The burden of student debt and the difficulty of finding jobs combined with the rising cost of rent and house pricing is causing more students to delay moving out of their family household and becoming homeowners,” Fields said.

Besides tough living conditions, residences affected by the housing crisis face difficulties with transportation. Molly Nichols, the director of Pittsburghers for Public Transit — a grassroots organization campaigning for a farther-reaching and more consistent bus service in Pittsburgh — said the lack of affordable housing causes people to look for homes outside of the city, making transportation a major hurdle.

“A lot of the people who live in these areas don’t own cars and are reliant on public transit,” Nichols said. “These are places with very limited service or no service at all.”

Lisa Gonzalez, a member of Pittsburghers for Public Transit, moved into the Borough of West View seven years ago after unsuccessfully seeking affordable housing for her and her son elsewhere. According to Gonzalez, the bus service was expansive when she first moved in, but now, only one bus can take her out of the neighborhood to run errands.

“I have to take that bus and then transfer to another bus in town to get to Oakland or Ross Mall to do grocery shopping, see the doctor and go to the laundromat,” Gonzalez said. “I don’t drive, and since there isn’t a reliable bus service, it’s hard for me to get all this done.”

Adam Brandolph, a public relations representative for Port Authority, said that rising costs of labor, health care, gas and other amenities, paired with the loss of state funding, led to bus service cuts in certain areas.

“If the route wasn’t getting an adequate amount of use, we pulled out of there,” Brandolph said.

According to Brandolph, Port Authority used the funding it got from Act 89 — also known as the Pennsylvania Transportation Bill — to extend their services to new streets, although they have been unable to establish new routes. This expansion is dependent on logistical outcomes.

“We can’t accommodate some requests if we don’t have enough available vehicles or if a request for more service reduces service in another area,” Brandolph said.

Alyssa Lieberman, a senior politics and philosophy major and president of Pitt’s United Students Against Sweatshops chapter, said college students are both victims of and contributors to the affordable housing crisis.

In her speech at the press conference, Lieberman — who has previously worked as a columnist at The Pitt News — cited high costs in housing as a factor placing financial stress upon student workers.

“I’ve had student workers express to me that they can’t pay their rent or their utility bills because the prices are so high,” Lieberman said. “You can’t expect a full-time student to be able to pay a $600-a-month rent on a wage of $8.15 an hour.”

Lieberman also said students are exacerbating the crisis by moving into off-campus housing and that the University is contributing by buying land for office space that might otherwise be occupied by “traditional residents.”

“As a University, we need to be more conscious of what we’re doing and take part in efforts to keep the cost of living in Oakland down,” Lieberman said.

“I live across from a practice field that used to have several houses on it,” Redwood said. “And the Sutherland dorms, there used to be houses there as well.”

Until residents in her community can afford to buy the properties they live on, McMillan said she will continue working to improve her neighborhood. Eventually, though, she wants to return to her old neighborhood in Mon Valley.

“I want to see new houses there,” McMillan said. “That’s where I grew up. I want to go back home.”