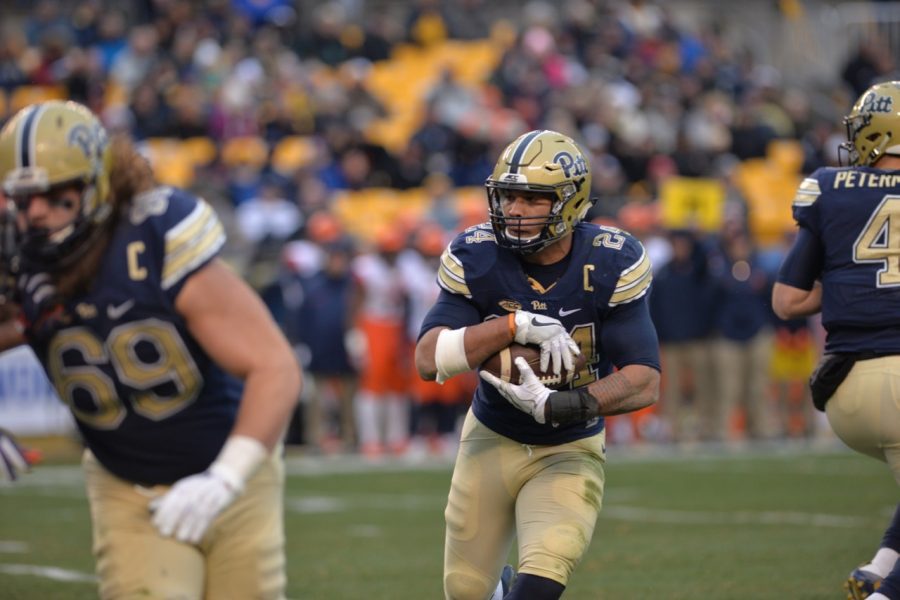 In the highest-scoring game in major college football history, the Panthers capped off their regular season with a 76-61 victory against the Syracuse Orange — their eighth game of the season scoring over 40 points and second in a row going over 50.

Pitt (8-4, 5-3 ACC) and Syracuse (4-8, 2-6 ACC) combined for an FBS-record 137 points in the game, including 47 in the fourth quarter. Both offenses were explosive, but the Orange couldn’t quite keep pace with the Panthers on senior day at Heinz Field.

“Like I tell our kids every week, there’s going to be ups and downs. Didn’t plan to have that many downs,” Pitt head coach Pat Narduzzi said at his postgame press conference. “I’ve never been in a game like that. I don’t ever want to be in a game like that again.”

The Orange won the coin toss and elected to receive to begin the game. Quarterback Zack Mahoney led Syracuse into Panther territory, converting two third-downs with passes to wideouts Alvin Cornelius and Amba Etta-Tawo before the drive stalled at Pitt’s 36-yard line.

After forcing a Panther punt, the Orange got the ball right back on Pitt’s side of the field. The Panthers’ defense was unable to make a stop, and Syracuse took an early 7-0 lead on a two-yard run by Mahoney.

On the ensuing kickoff, Syracuse kicked the ball out of bounds and Pitt took over at their own 35. Facing a third-and-4, Panther quarterback Nathan Peterman found Jester Weah on a crossing route. Weah sprinted by several defenders and ran into the end zone, tying the game with 6:29 left in the first quarter.

The Panthers forced a Syracuse punt on their next drive, but they gave the ball right back, as Peterman was intercepted by Syracuse cornerback Corey Winfield at the Orange 33-yard line.

Pitt’s defense was able to come up with another stop, and Panther wide receiver Quadree Henderson returned the punt to the Syracuse 35-yard line.

On the first play of the drive, the Panthers took a 14-7 lead when Peterman found running back James Conner wide open on the edge of the right sideline for a 35-yard touchdown. Conner praised Offensive Coordinator Matt Canada for putting him in position to get open.

“We’ve been running that play in practice. Coach Canada is a phenomenal coordinator,” Conner said. “Pretty much everything he draws up works, so I wasn’t surprised [I was that open].”

Syracuse followed up with a 74-yard drive, tying the game at 14 after a short run by Dontae Strickland with less than half of a minute to go in the first quarter.

Pitt retook the lead on their next possession, a 65-yard drive capped by a six-yard run by fullback George Aston.

After forcing another Syracuse punt, the Panthers stretched their lead after Conner punched in his second touchdown of the game — surpassing 1,000 rushing yards for the season on a five-yard run earlier in the possession.

The Orange refused to go away as Mahoney engineered a 14-play touchdown drive finished off with a five-yard screen pass to Etta-Tawo.

With 1:36 left in the first half, the Panthers got the ball back with two timeouts. The offense advanced deep into Syracuse territory, before facing a third-and-10 at the Orange 13-yard line.

Peterman was unable to find an open receiver on the play and decided to run for the end zone himself. He was hit by a Syracuse defender at the two-yard line, but was able to score by diving and barely knocking over the pylon with the ball.

Pitt started the second half up 35-21 and had an opportunity to extend its lead on their first drive of the second half. But, the Panthers were forced to punt at their own 45-yard line after a Peterman pass intended for wide receiver Aaron Mathews fell incomplete.

A few plays later, Mahoney threw a short pass to the sideline, but Pitt cornerback Dane Jackson stepped in front of the receiver and intercepted the ball. Jackson returned the interception to the end zone to put the Panthers up three touchdowns.

With the momentum back on their side, the Pitt defense forced a quick punt on the next possession. The Panthers offense wasted no time, scoring on a 66-yard jet sweep to Henderson and taking a commanding 49-21 lead with 8:59 left in the third quarter.

Syracuse responded by driving 85 yards and scoring on a 42-yard run by running back Moe Neal. But Pitt’s offense responded, again, scoring on another jet sweep, this time to first-year Maurice Ffrench, to make the score 56-27.

After back-to-back punts, the Orange took over at the Panthers’ 45-yard line and six plays later, Etta-Tawo found himself in the end zone for his ACC-leading 10th touchdown of the season.

The Orange got the ball back quickly, as Peterman fumbled while attempting to escape Syracuse’s defensive pressure. Mahoney led his offense down the field, scoring on a 19-yard run to make it 56-41.

On the next possession, Pitt’s offense again scored quickly, as Peterman found senior Dontez Ford — a former Syracuse wide receiver — streaking across the field for a 79-yard touchdown pass, extending the lead to 22.

The Orange continued to stick around though, as Etta-Tawo scored his second touchdown of the game on a seven-yard reception to cut the deficit back to 15 at 63-48.

When they got the ball back, the Panthers offense drove down the field to set up a six-yard touchdown pass to Weah, bringing the game to 70-48 with 5:06 left on the clock.

Syracuse managed to score again with 3:47 on a 49-yard touchdown pass to Etta-Tawo, but Pitt scored again on a one-yard rush by Conner and, after a Chris Blewitt missed extra point, the score was 76-55.

But the scoring was not done yet, as Syracuse’s Etta-Tawo made his fifth receiving touchdown of the game for 13 yards. The Panthers recovered another onside kick and kneeled the ball down on the final possession of the game, winning by a score of 76-61.

The win gives Pitt its second consecutive 8-4 season, and the team will have the opportunity to finish with its best record since going 10-3 in the 2009-10 season by winning its upcoming bowl game.

The Panthers will find out their postseason destination Sunday, Dec. 4.