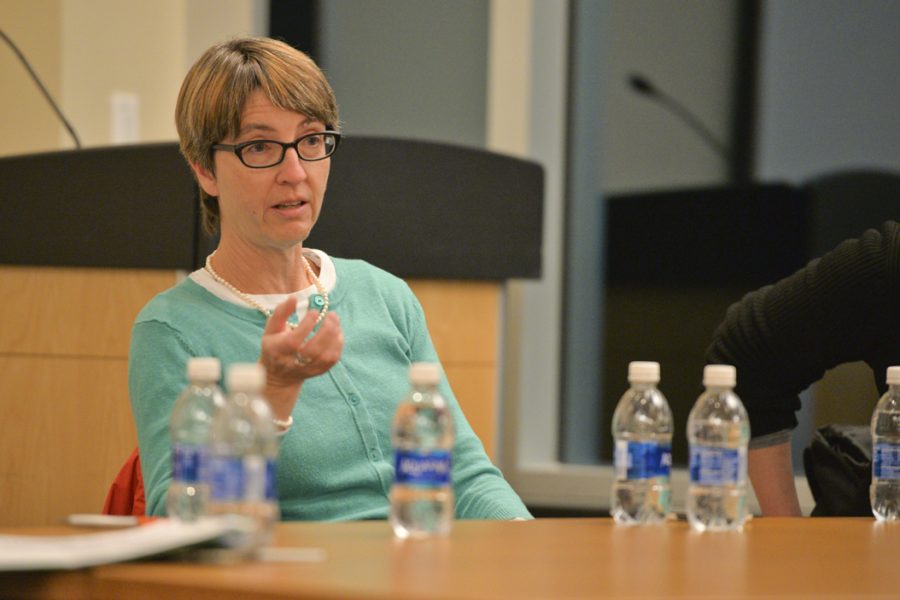 As a young woman in the 1990s with no clear career direction, Linnea Glick was in a situation comparable to many young people just out of college or still deciding on a path.

She was working in a Pittsburgh coffee house, supplementing her curious nature through art: helping friends produce indie films, stage plays and organize art exhibits. Now, as an assistant director at Pitt Arts, Glick tries to channel her own experiences fending off boredom by helping students — who she says often don’t have the passion or energy to venture out, based on student surveys —  do the same.

“I want to encourage them to be more curious by telling them about what I did as a young adult living in Pittsburgh,” Glick said.

Glick was one of four panelists who spoke at Thursday night’s “Can Curiosity Promote Healthy Living?” talk, which about 20 people attended. The talk was part of the discussion series “What Does it Mean to be Curious?” Kate Joranson — head of the Frick Fine Arts Library — and Nate Morehouse — an assistant professor in Pitt’s department of biological sciences — founded the series in the fall of 2015.

The series aims to bring together people from artistic and scientific backgrounds, Joranson said, because both of those professions are driven by similar intellectual needs.

“At the discussions, the artists and scientists can then discuss what they think creates and preserves a sense of curiosity, as well as what can destroy it,” Joranson said.

Panelists — whose backgrounds ranged from entrepreneurship to education — took part in an informal discussion with the audience about how they believed curiosity was linked to human health, such as how it affected mood and child development.

Lynne Williams, a panelist and a physician who co-founded Jeremiah’s Place, a crisis nursery that provides free childcare and temporary housing to families in emergency situations, said one of the factors that could limit a child’s curiosity is growing up in a traumatic environment.

“Growing up in neglectful and dangerous environments deters children from developing curiosity, as they learn from engaging with others and from being safely able to explore their world,” Williams said.

The panelists and audience also discussed how the current American school system stifles curiosity and creativity in teenagers by dictating what they should do and not allow questioning natures to develop and mature. Williams said schools are not allowing children to be curious.

“They’re not giving people an opportunity to be curious,” Williams said. “They set out exactly what students need to do, giving them few challenges or chances to think creatively.”

So what happens when they get to college?

Glick, whose job is to get Pitt students to go to places such as museums, theaters and exhibitions beyond campus, said she’s noticed that many don’t think they have the time to participate in Pitt Arts events. In addition, students sometimes avoid excursions out of fear, she said.

“They are afraid to leave campus, or to go somewhere new and perhaps without anybody they are familiar with,” Glick said.

According to Willa Doswell, a panelist and an associate professor at Pitt’s School of Nursing, environments that don’t encourage students’ curiosity stifle their creative growth, which can result in mental and emotional stagnancy later on.

“You can break the constant cycle of sadness or inactiveness by doing something else, shaking your life up,” Doswell said.

Ketaki Desai, a panelist and the executive director at [email protected] — a business development service — said she becomes moody if she does not have something to do. She tries to stimulate her sense of curiosity with three specific tasks each week: making something new, learning something new and giving something away.

“I’ll start a new language on Duolingo, I’ll try to invent a new dish in the kitchen, anything to keep me busy and curious,” Desai said.

Clarisse Fava-Piz, a PhD student in Pitt’s department of history of art and architecture, said many people she has studied with back home in France and here do not value a curiosity in culture and are not passionate about what they do.

“A lot of my friends are just studying to get a job in something that will make them money,” Fava-Piz said. “I think that’s a real problem in society, because it means a lot of people don’t have passion for the work that they do.”

Editor’s note: A previous version of this story contained a partial quote attributed to Linnea Glick that was actually spoken by another panelist. The story has been updated to reflect the correct quote. The story has also been updated to indicate that Glick’s opinions of student activity are based on student surveys. The Pitt News regrets this error.