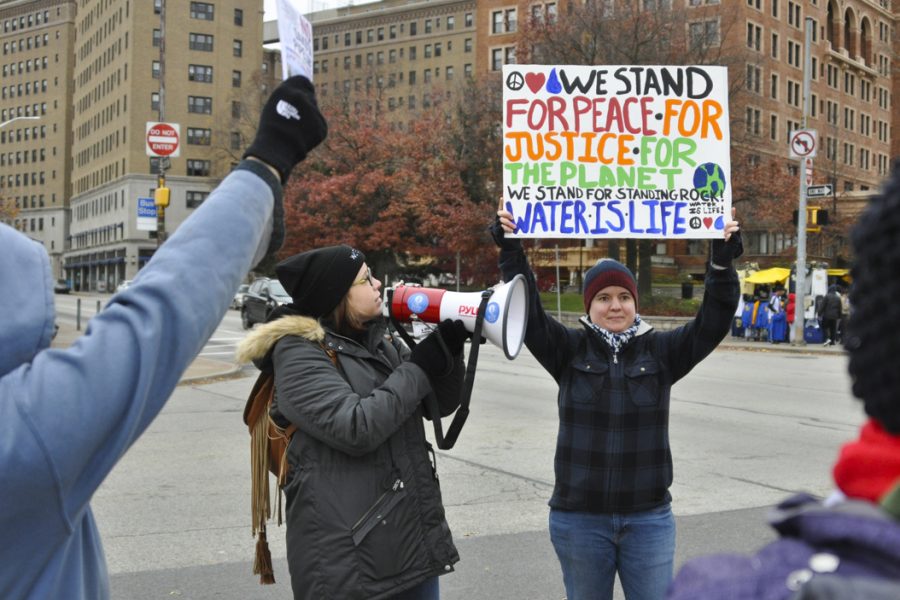 Jenna Arthur-Tomor speaks into a megaphone during a protest supporting Standing Rock against the DAPL.

Rather than staying in the comfort of her Braddock Hills home, Beth McAhren spent her Thanksgiving in Standing Rock, North Dakota.

For five days at Standing Rock, McAhren cooked meals for the demonstrators there protesting the construction of an energy pipeline through land near a Sioux tribe reservation. McAhren’s said she was “protecting” the land and water that the Dakota Access Pipeline would damage.

On Sunday, McAhren’s and other’s efforts paid off. After months of protests and demonstrations across the country, the federal government denied the pipeline’s permits for its current route. The denial is a delay for the construction, but may not stop the construction entirely, pending a review of the project and further consideration by president-elect Donald Trump.

But it was a long journey to Sunday’s announcement.

During the protests throughout the week of Thanksgiving, the “water protectors” — the term used to describe protestors and demonstrators opposing construction on the Dakota Access Pipeline — gathered in camps of tents and tepees, trying to get rest. McAhren said the nights were long and cold, and the police flew helicopters low at night, shining bright lights on the camps to interrupt protectors’ sleep.

Energy Transfer Partners, a Texas-based Fortune 500 company, planned to build the DAPL as part of the Bakken Pipeline Project to transfer crude oil from North Dakota to Illinois. The initiative is supposed to reduce the amount of crude oil shipped by truck and rail and increase the amount shipped by underground pipeline.

Americans from all over the country have been setting up camps in Standing Rock since spring 2016, along with over 90 Native American tribes, to protest the pipeline, which they say is dangerously close to the Standing Rock Sioux Tribe’s main water source.

In a victory for the protectors, after months of social action in North Dakota and around the country, the federal government denied permits for the pipeline Sunday. In the meantime, the Army Corps of Engineers will conduct an environmental impact review of the project and look at other possible routes for the pipeline.

But the fight isn’t over yet. Although the Obama administration halted the project, construction could still move forward with the approval of the administration later on. President elect-Donald Trump has already publicly shown his support for the project and Energy Transfer Partners has previously said it is willing to wait for approval from the Trump administration.

Before that happened though, protestors and protectors have gathered in Pittsburgh several times to join the fight against the DAPL. McAhren and more than 40 protesters met in Schenley Plaza this Saturday in the most recent effort to bring awareness to violence against those gathered at Standing Rock.

Jen Arthur-Tomor and her wife Jenna, organized the protest in Oakland, and stressed the importance of and even invited protesters to bring their children.

“No swearing, no profanity, no spreading violence,” Arthur-Tomor said as the group gathered along Fifth Avenue.

For the next hour and a half, college students, children, parents, and veterans huddled together in the cold, chanting and chatting with passersby.

Protesters held up homemade signs that read “Defend the Sacred,” “We all need water!” and one that served as a cheat sheet for their main chant ––  “We stand for peace, justice, the planet. We stand for Standing Rock. Water is Life.” Cars honked as they drove by, eliciting cheers from children holding signs.

One child — wearing a winter cap with “Standing Rock” written on it — ventured there with his mother, Lissa Ludinich from McKeesport. Ludinich stressed the importance that protests such as these happen in places like Pittsburgh, rather than simply in Standing Rock.

Arthur-Tomor said that she and her wife chose Pitt’s campus as the location for the protest because others here have been peaceful. In addition, they hoped to reach a younger audience.

“The older generation already has the wool pulled over their eyes,” Arthur-Tomor said. “The younger generation and the college students are growing up in a generation seeing more. They can see more what’s going and they can see what’s not right and they’re more likely to stand up and fight for what they believe in.”

The protesters remained on the corner of Fifth Avenue and Bigelow Boulevard for the duration of the demonstration because it was high-traffic area, Arthur-Tomor said.

Lucy Clabby, a fifth-year English writing major at Pitt, said she showed up to the protest because the mainstream media has been ignoring the topic.

“The more noise we make about it, the more attention people pay to it,” Clabby said.

A large portion of the news surrounding the Standing Rock protests has spread through social media. Most notably, many of those opposed to the DAPL are “checking in” to Standing Rock via Facebook, even when they’re not there in person, in an effort to confuse authorities and show solidarity with on-site protectors.

Even as the winter months approach, some DAPL protesters are still planning on traveling to Standing Rock. Eva Resnick-Day, a Pitt alum from the class of 2012 who majored in political science and environmental science, said she was preparing to travel to North Dakota to join the protest camps this coming Monday.

“We need to be sure to protect the earth and our water for everyone no matter where we are,” Resnick-Day said.