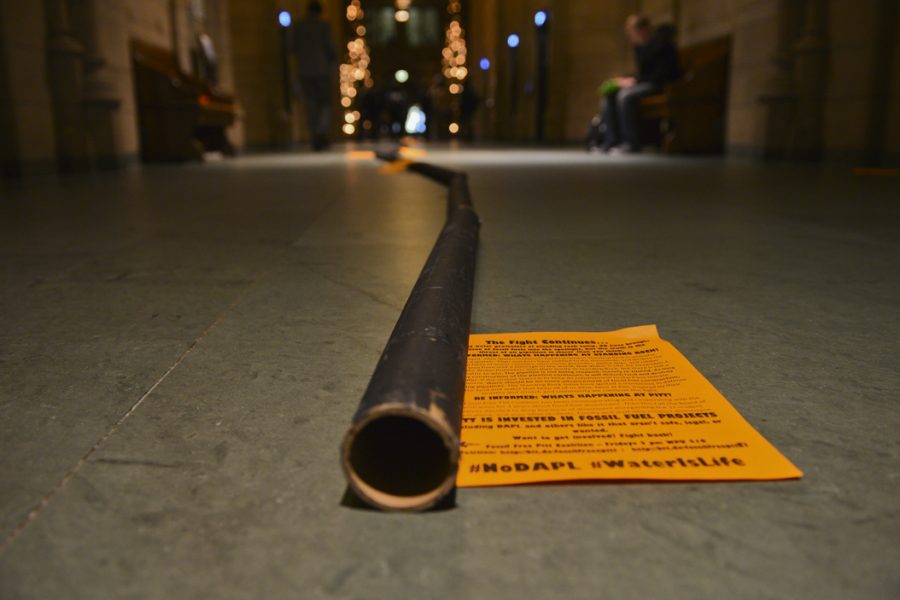 A thin, cardboard oil pipeline roughly 200 feet long stretched along the slate floor of the Cathedral Commons for about 20 minutes on Monday morning.

Students had constructed the “pipeline” out of recycled cardboard tubes painted black and stretched it from the main entrance of the Commons to the back. About 25 members and supporters of the Fossil Free Pitt Coalition, a consortium of student groups that support divesting the University’s finances from its endowment in fossil fuel companies, held the demonstration.

“We need to push now more than ever to get Pitt out of the industry, despite any claims that it’s ‘profitable.’ Stopping the causes of climate change is more important,” said Abigail Meinen, a senior English writing major who showed up to support the action.

The coalition has been protesting the University’s continued investment in fossil fuels for about two years. In February, Pitt revealed that the school invests about $26 million in the fossil fuel industry.

Coalition organizer Sage Lincoln, a senior at Pitt, and several other members of the group have been in communication with the University this school year following a presentation the students made to a Board of Trustees committee in February.

The students’ presentation argued both the moral and economic reasons for divesting from fossil fuels, and the students were hoping that the Board would form an ad hoc committee to consider divestment.

The Board was considering the economic reasons for divestment, but there has been no announcement on the formation of a Board of Trustees ad hoc committee. The Faculty Senate committee — made up of Pitt faculty and staff — has committed to forming its own ad hoc committee to research fossil fuel divestment.

Members of the coalition wore orange scraps of cloth pinned to their shirts Monday — symbols of the fossil fuel divestment movement — and handed out flyers with information about the Board’s decision and Pitt’s investments in fossil fuels to studying students and people strolling through the Commons. They also dropped off a letter at Chancellor Gallagher’s office asking the University to reconsider the formation of an ad hoc committee.

“Pitt has chosen to fail its students and the region instead of taking climate change and our values seriously and becoming a responsible regional leader,” the letter read.

University spokesperson Joe Miksch said the University will consider the students’ concerns and that he could not comment further. Dean of Students and Vice Provost Kenyon Bonner, whom the students have met with about this issue, said earlier this year that the decision over whether or not to divest will not come quickly, but he could not be reached Monday evening.

The last time the University formed a divestment committee was in the 1980s when Pitt decided to divest holdings in South Africa in protest of apartheid — racial segregation and discrimination in the country. Student and local activists pushed for this divestment for more than 10 years.

“The University divested money from South African companies during apartheid, so that this is happening while climate change is causing irreversible damage to the environment and to society is unacceptable,” Lincoln said.

The demonstration began at 11:40 a.m. and lasted until noon, when the students packed up and left.

According to Lincoln, a geology, ecology and urban studies major, the pipeline demonstration was initially also going to be a protest for the planned removal of protestors from Standing Rock on Monday. But in light of of Sunday’s announcement that the Dakota Access Pipeline would not be routed through the land of the Sioux tribe at Standing Rock, it turned into a show of support for the decision.

Sydney Brooks, an undeclared junior, observed the demonstration while studying in the Commons. She found the artistic representation of the pipeline to be a creative way to bring attention to FFPC’s cause and said it encouraged her to look more into what they do.

“I already knew about the DAPL decision, but I wasn’t aware that our university was involved with fossil fuel companies,” Brooks said. “I’ll definitely be trying to find out more about that.”

Meinen, who came to the demonstration to support the Coalition, said students can help support the cause by appealing to Pitt administrators.

“Writing emails and letters to administration here is one of the best ways to help us fight the the injustices caused by the fossil fuel industry,” Meinen said.

In an immediate press release after the event, the coalition stated their members will continue to advocate by any available means if their request for the ad hoc committee is ignored.

Also in the release, senior environmental science major and Coalition organizer Alex Stash said the symbolic act was to show how objectionable the presence of a pipeline can be to anyone, anywhere.

“If building this pipeline is disruptive to our learning conditions, why is building oil pipelines all over the country not considered disruptive to the living conditions of those whose water is being poisoned and those worldwide affected by climate change?” Stash said in the release.