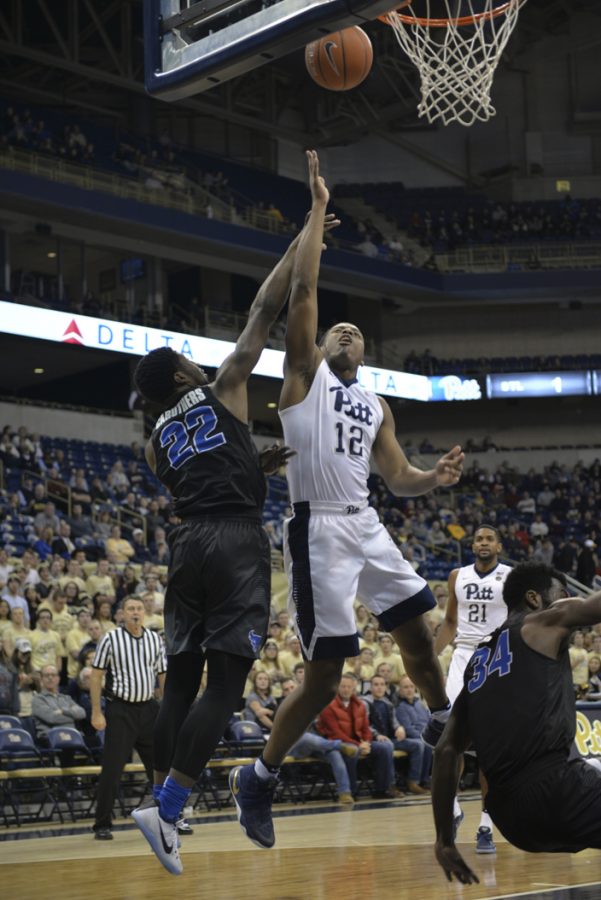 Senior guard Chris Jones (12) was one of six Panthers with double-digit points in an 84-79 win over Buffalo. Meghan Sunners | Senior Staff Photographer

The Pitt men’s basketball team appeared to be headed for a much-needed blowout win over the underwhelming Buffalo Bulls Wednesday night. Instead, it turned into another ugly nail-biter for the Panthers.

After Pitt jumped out to a 26-point lead, the Bulls (4-5) completely outplayed the Panthers over the second half of the game and closed the gap to one. Still, Pitt (7-2) held on for an 84-79 win at the Petersen Events Center. Senior forward Michael Young and sophomore guard Cameron Johnson led the Panthers with 17 points apiece while senior point guard Jamel Artis added 16.

“I thought for about 15 minutes there to start the game we played very, very well,” Pitt head coach Kevin Stallings said. “It’s nice on a night where probably neither Mike nor Jamel had their best game, that we had four other guys step up and score in double figures.”

Pitt was unable to contain Buffalo’s 6-foot-8 sophomore forward Nick Perkins, who led all players with 23 points and eight rebounds, but just barely scraped out the win.

“He went to work in the lane. He’s a big, strong, physical guy in there,” Stallings said about Perkins. “I liked him on film, but I thought he was exceptional tonight.”

Young got the game started with a 3-pointer from the top of the key, then the Panthers immediately went into a full-court press on defense, forcing Buffalo to burn an early timeout.

After failing to score more than five points in each of the last six games, senior forward Sheldon Jeter got involved in the Panthers’ offense early, contributing a dunk and a layup to extend Pitt’s lead to 12-4. A 3-pointer by Artis and a 3-point play from senior guard Chris Jones capped a 15-0 run and ballooned the Panthers’ lead to 16 points at 20-4.

After a bucket by Buffalo momentarily stopped the rout, Pitt junior forward Ryan Luther went on a 7-0 run of his own by way of a layup, two free throws and a 3-pointer. Another three from Johnson pushed the Panthers’ lead to 30-7 midway through the half.

The Bulls then started to make shots, but they couldn’t stop Pitt from making them on the other end. A 7-0 Buffalo run cut the deficit to 17, but the Panthers quickly responded with a 6-0 run to make it 39-16.

“I think we sped them up in the press in the first 15 minutes. We were able to get them out of sorts,” Johnson said. “They weren’t really getting into anything, we kind of kept them out of the paint a little bit more, and when they got there, we collapsed on them pretty well.”

Luther sunk four more free throws to give him a season-high 11 points in the game, putting him in double figures for the first time all season and giving Pitt its largest lead at 47-21.

But the Bulls would respond, breaking off a 16-2 run late in the half to narrow the gap to just 12 at the break.

Buffalo scored on the opening possession of the second half to make it a 10-point game at 49-39, but the Panthers rediscovered their offense with a jumper by Jeter and a couple of layups from Jones and Artis.

Young then missed an easy layup in the paint, and a pair of baskets from Perkins made it 56-43 Pitt.

Johnson converted on his second 3-point play to push the Panthers’ lead back to 16, but Buffalo continued to chip away. A 15-4 run made it a five-point game at 63-58 with just over 11 minutes to play.

Pitt continued to miss easy shots in the lane and the Bulls just kept making theirs’, keeping the game in single digits.

Perkins continued to dominate inside for Buffalo, and the Bulls eventually closed to within one at 69-68 with 6:30 to play. But they couldn’t quite get even, and the Panthers squeaked by for an 84-79 win.

“I think we just got a little bit complacent,” Jeter said. “Then offensively, rather than moving, we got a little stagnant. Also defensively we stopped having the same intensity, and it just hurt us, honestly.”

Pitt will next take on the Penn State Nittany Lions in the Never Forget Tribute Classic at the Prudential Center in Newark, New Jersey, on Saturday, Dec. 10. Tipoff is at 2:30 p.m.

“We just don’t want to let the school down twice,” Jeter said, likely referring to the Panthers’ City Game loss to Duquesne. “Two wins over Penn State in one year, football and basketball, that would be a good thing, in my opinion.”