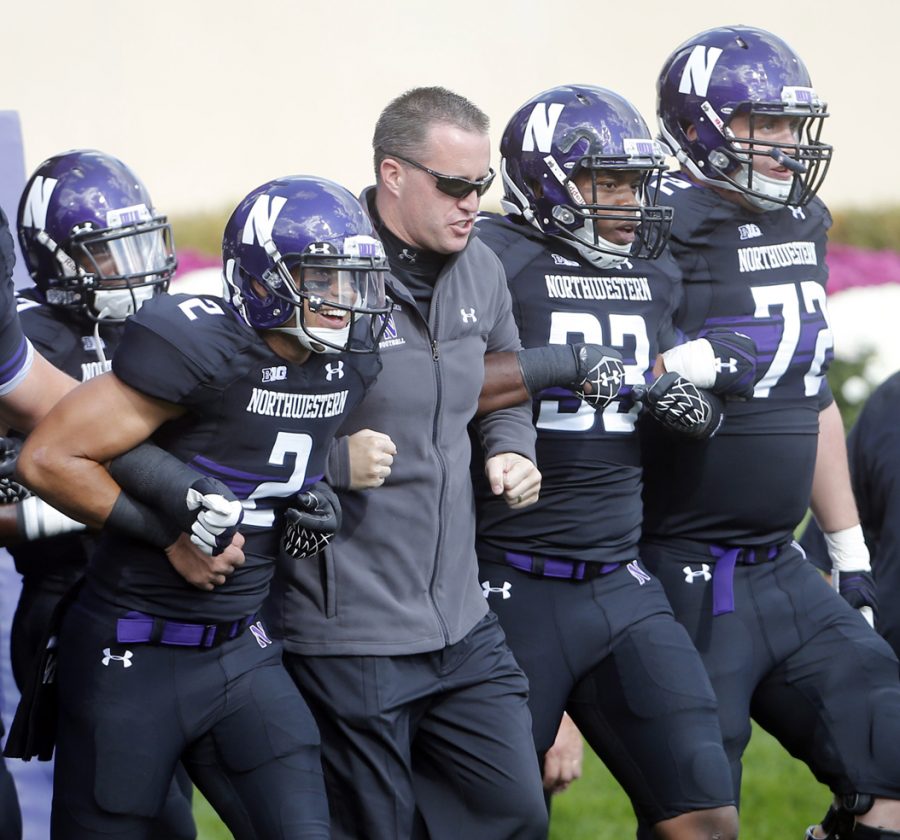 Northwestern head coach Pat Fitzgerald has returned the Wildcats to prominence after leading them to two Big Ten titles as a player in 1995 and 1996. (TNS)

Although the Wildcats needed a win over Illinois in their regular season finale just to become bowl eligible, Northwestern is a balanced and dangerous team possessing all the tools necessary to deny Pat Narduzzi his first bowl game victory as Pitt’s head coach.

With the No. 23 Panthers (8-4) and Wildcats set for a showdown at Yankee Stadium in the New Era Pinstripe Bowl at 2 p.m. Dec. 28, here’s what to look out for if Pitt wants to claim that ninth win to end the season.

May the best Pat win

There are a lot of similarities between Narduzzi and Northwestern head coach Pat Fitzgerald, and it goes well beyond their first names.

Both were linebackers during their playing days, and both bring that fiery passion and intensity to the sidelines with them in every game they coach.

Narduzzi played a year under his father, Bill, at Youngstown State in 1985 before transferring to Rhode Island and starting at linebacker for three years from 1987 to 1989. Fitzgerald, meanwhile, was a star linebacker for the same Wildcats program he coaches now.

Fitzgerald led Northwestern to back-to-back Big Ten titles in 1995 and 1996, becoming the first two-time recipient of the Nagurski and Bednarik Awards as college football’s top defensive player and leading to his 2008 induction into the College Football Hall of Fame.

Narduzzi admitted at the Pinstripe Bowl press conference that he looks up to Fitzgerald in many ways, and even reached out to him for advice when he first became a head coach before the start of last season.

Now, after admiring Fitzgerald and the program he has built at Northwestern, Narduzzi will face the challenge of trying to beat him.

The Wildcats will bring a balanced attack to the matchup on offense, with the ability to beat teams either on the ground or through the air.

Northwestern quarterback Clayton Thorson is a 6-foot-4, 220-pound gunslinger, who threw for 2,968 yards and 21 touchdowns with only eight interceptions on the year. Meanwhile, Wildcats running back Justin Jackson has tallied over 1,000 yards rushing in each of his three seasons at Northwestern. This year, the speedy back ran for 1,300 yards and a career-high 12 touchdowns.

Pitt’s stingy run defense ranks ninth in the country out of 128 FBS teams with only 108.9 yards allowed per game, and has made offenses one-dimensional all season. But teams have had no problem throwing the ball against the Panthers when the running game doesn’t work out. Look for Thorson and the Wildcats to do just that if Jackson has no room to run.

Out of the blue

Thorson and Jackson make for a great duo, but it’s Thorson’s main receiving target that the Panthers should really be worried about.

Wildcats wide receiver Austin Carr emerged from relative obscurity before the season and turned into one of college football’s biggest breakout stars in 2016. Entering the year, Carr had only 23 catches for 402 yards and two touchdowns in his college career.

The 6-foot-1, 200-pound senior then exploded for 84 catches, 1,196 yards and 12 touchdowns in his final season. Carr’s performance made him one of three finalists for the Biletnikoff Award, given annually to the best wide receiver in college football.

That means that after all the freakishly athletic, NFL-ready wide receivers that have already tormented Pitt this year — Oklahoma State’s James Washington and Chris Lacy, North Carolina’s Ryan Switzer, Clemson’s Mike Williams and Syracuse’s Amba Etta-Tawo, to name a few — Carr has been better than all of them.

That’s a scary proposition for the Panthers’ defense, and they will need to use every minute of the extra time given to prepare for Carr leading up to the bowl game.