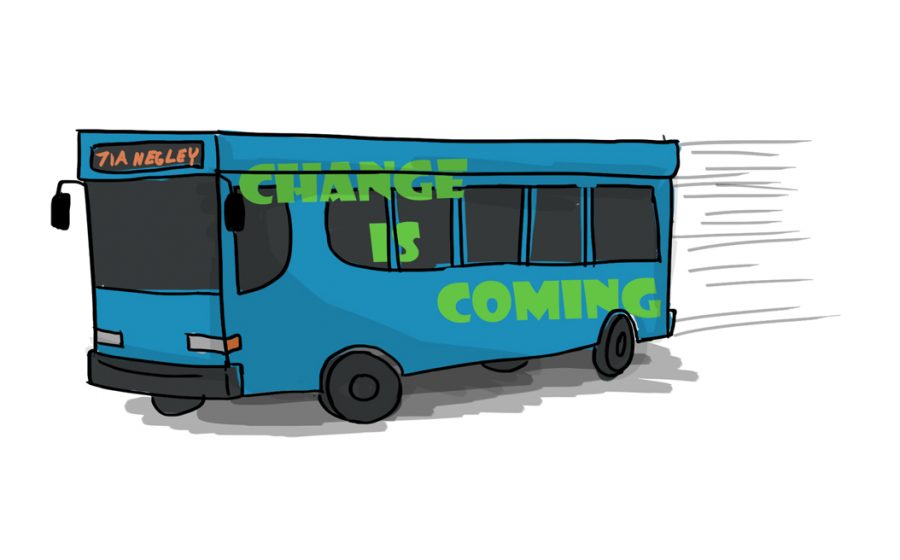 If you rode a Port Authority bus in the last two months of 2016, you probably noticed the scrolling banners or audible reminders promising that “change is coming.”

The messages could have been intended to be comically ominous, but the larger objective was to alert riders to the coming changes in 2017, including instituting a flat fare, a one-zone system and streamlining the confusing paying on entrance or exit debacle. The changes are good and an innovative way to usher taking the bus into a faster, easier, more efficient option, but there’s still work the Port Authority needs to do to ensure the new policy is better for all of its riders.

Perhaps the most important change coming is the new flat fare system and the few stipulations that go along with it. In 2017, riders using a ConnectCard will pay the new fare of $2.50 for a ride and $1 for a transfer, whereas riders using cash will pay $2.75 with no option for a paper transfer — meaning if you’re paying in cash, you must dole out an extra 0.25 cents per trip, and if you need a transfer, it’s an additional flat fare of $2.75.

About 20 percent of Port Authority riders still use cash to pay for their trips. This becomes an issue in the new system as it’s designed to deter people from using cash in an effort to ease riders into the the new, completely cashless policy for Pittsburgh’s light rail system, the T, that will begin in July.

Currently, you can purchase and reload ConnectCards at Giant Eagles and other retail locations, at one of 62 machines located on bus routes around the city or online. But for lower-income riders who can’t pay large sums in advance for weekly or monthly passes, who don’t live near a reloading location or don’t have access to the internet or debit cards to easily reload day by day, cash becomes their only option.

Outside of the new streamlined method of paying on entrance and exiting through the back doors, the actual changes might not affect us Pitt students who use Panther Cards to pay for public transportation — but we should care about our community and the way the changes unfairly affect our lower-income residents.

The Port Authority’s 2015 Rider Survey found that the large portion of those who didn’t use a ConnectCard cited an “overall lack of understanding about how/where to purchase or reload the card as well as the features and benefits it offers.” The new system should quickly clear up any misunderstandings about the benefits of the cards as cash riders pay higher fares, but purchasing and reloading cards is still going to be an issue.

The Port Authority’s interactive map shows the different bus routes throughout the city and all of the locations where one can purchase and reload ConnectCards. A quick reading of the map easily shows that Port Authority has a lot of work to do establishing more locations in the New Year.

There’s one retail location on the border between north Bloomfield and south Garfield for all residents in both neighborhoods and one more at the Children’s Hospital but no machine locations at these bus stops. These retail spots are the northernmost locations until you hit Ross Township, isolating northern Lawrenceville, Garfield, and East Liberty and all of Highland Park from any locations. Perhaps this wouldn’t be an issue if we assume travelers in these areas will be taking the buses to areas of the city where there would be plenty of locations, but this isn’t always the case.

Except for one retail location on Forbes Avenue in Oakland, there are no more retail and no machine locations in the triangle section of the city bordered by I-376 to the south, downtown to the east, the Allegheny River to the north extended all the way out to edges of Polish Hill and the beginning of Point Breeze — an area including the Hill District, most of Bloomfield and Greenfield and large swatches of many other neighborhoods.

Adam Brandolph, the Port Authority’s public relations representative, said they are working to address these issues in 2017.

“The Authority is looking to add several other locations through strategic partnerships and more creative solutions,” said Brandolph. These include the expansion to several Goodwills around the city, set to open in the first quarter of 2017, and a 15 percent increase in machines by the summer. These additions are imperative for the new policy being implemented fairly and efficiently.

The changes themselves are vital and will make using buses quicker, easier and more efficient, but the new system will only work best when it is likewise simple and efficient for all users. The priority needs to be on making it so cash can be converted into ConnectCard funds easily through a plethora of retail locations and machines at nearly all bus stops.

If the city and the Port Authority really want to usher in a new period of change, we need to change while taking all of our residents’ needs into consideration.

Amber is the Opinions Editor for The Pitt News. She primarily writes about gender and politics.