Through its storied history, Pitt’s Music Building plays a role in Rogers’ legacy 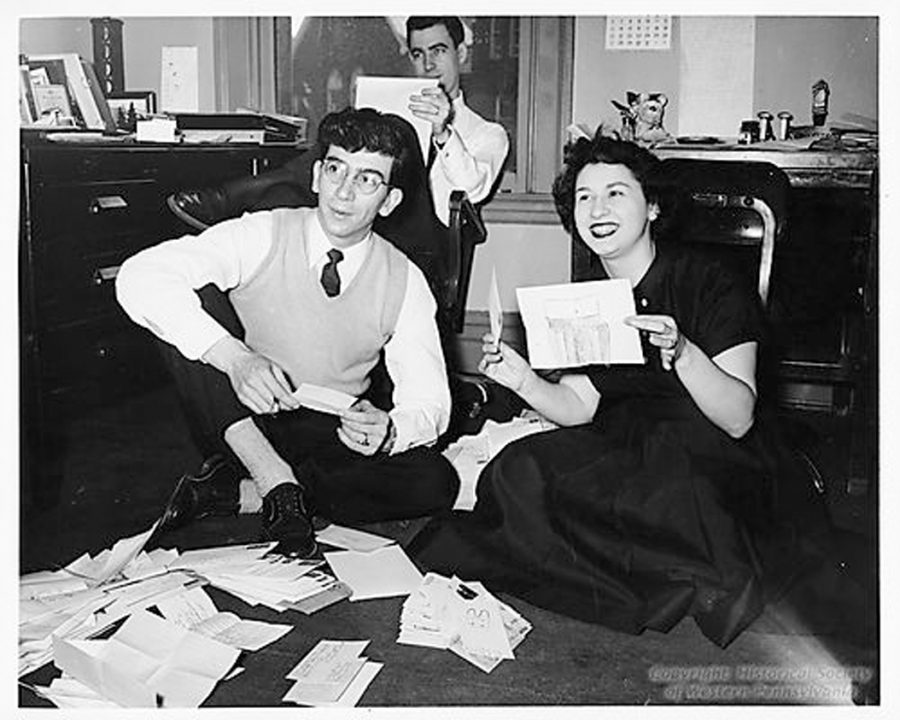 Children from around the country grew up singing “It’s a beautiful day in the neighborhood” along with the Mr. Rogers they saw on TV. But children in Pittsburgh needed only to walk down the street to see the TV personality in person.

Rogers’ presence is still tangible in his steel city hometown, at places like the Mr. Rogers Memorial Statue on the North Side or the display of the set of “Mister Rogers’ Neighborhood” at the Heinz History Center. In Oakland, Pitt’s Music Building plays a role in preserving the memory of the legendary children’s television personality.

The building wasn’t always a place for student musicians to rehearse — it was once the original production site for the hit educational PBS television series “Mister Rogers’ Neighborhood,” a club for the Knights of Columbus and a laboratory for the Columbia-Southern Chemical Corporation.

The Music Building was constructed in 1884 and was first home to the pastor of Bellefield Presbyterian Church, William J. Holland, who was also the eighth chancellor of the University of Pittsburgh.

Deane L. Root, chair of Pitt’s music department and a professor at Pitt, came to Pitt in 1982 and works in the Music Building, where he said there are rumors that there used to be a tunnel when the building was used as Holland’s home.

“Legend has it that there was a tunnel between the basement and [the Bellefield Presbyterian Church] so that Holland could get over [to the church] faster — back and forth without having to go outside. But I don’t know where that tunnel is, and it’s been closed up long since,” Root said.

The building’s ownership moved from the church to the Knights of Columbus to the Pittsburgh Plate Glass Company to WQED — the city’s first educational television station — and, finally, to Pitt in 1971 when the Pitt Department of Music moved in.

The Music Building sits between Bellefield and Ruskin Avenues along Fifth Avenue, and although its sandstone exterior has not changed since its construction, the interior has been renovated multiple times.

While under WQED ownership from 1966 to 1971, the Music Building was the set of “Mister Rogers’ Neighborhood,” when WQED moved into a new building.

David Newell, a 1973 Pitt alum who worked in the Music Building while it was under WQED ownership, said the building had changed significantly from the set he once performed on.

Newell played a deliveryman named Mr. McFeely on “Mister Rogers’ Neighborhood” and is best known for his catchphrase “Speedy delivery!”

“It’s interesting — and it may have changed — but when I was in [Pitt’s Music Building] years ago, everything had just been changed and divided up into rehearsal rooms except they kept…the oak-paneled room, that was the library of the [building] and it was still there, and that’s the only original part of the house,” Newell said.

How “Mister Rogers’ Neighborhood” Came Together

When “Mister Rogers’ Neighborhood” first began, Rogers himself did all of the writing, which meant his staff was small.

Hedda Sharapan — who is now senior fellow at the Fred Rogers Center at St. Vincent College in Latrobe, Pennsylvania, and was named one of the distinguished alumni of the Department of Education at Pitt in 2015  — began as assistant director for “Mister Rogers’ Neighborhood” in 1966 and was also the voice of a puppet named Mrs. Frogg on 33 episodes of the show.

WQED interviewed Sharapan, who at the time was seeking a job that would help children through television. According to Sharapan, the man who interviewed her said WQED didn’t have any job openings at the moment and that she should ask Rogers for advice.

He encouraged her to enroll in Pitt’s graduate Child Development program, where he had also attended classes in the early 1960s.

Two years into Sharapan’s master’s program at Pitt, Rogers got funding for “Mister Rogers’ Neighborhood” and offered her a job.

Although her title was assistant director, Sharapan’s position was unpaid and on a “small staff” of 12 to 14 people.

“I would sit in classes in graduate school in the daytime and learn about this complex child development theory, and I would be in the control room — three nights a week — and I would watch [the lessons] play it out,” Sharapan said. “I was really privileged to be seeing it through the eyes of child development while I was watching Fred create a television program out of that.”

“Mister Roger’s Neighborhood” began filming in Pitt’s Music Building shortly after wrapping up the film production of “The Children’s Corner” — a live daily television program that Rogers produced from 1954 to 1962, for which he was also the puppeteer, composer and organist.

“We did 130 programs [for “Mister Rogers’ Neighborhood”] that first year — they were all in black and white, and he wrote the programs and all the scripts,” Newell said.

Rogers originally hired Newell as a production assistant on “Mister Rogers’ Neighborhood,” but because Newell had experience in acting — he took classes at the Pittsburgh Playhouse — Rogers later hired him to play the role of the deliveryman, Mr. McFeely.

Newell said that Rogers and his show aimed to help children with issues that parents and adults may have forgotten about, such as the separation anxiety children experience on the first day of school.

“Our goal was to take television and instead of selling [children] cornflakes, let’s try to help with an emotional education or showing them about the world,” Newell said. “[The program] had a mission to it. It had a purpose.”

When Sharapan and Newell recall the early days of “Mister Rogers’ Neighborhood,” they picture the café in the basement of Pitt’s Music Building.

“There was a guy named Joe [Gould] who made lunches for people, and he always had some kind of garnish, like a wilted piece of celery with the leaf on it as a garnish,” Sharapan said. “He was a very old world kind of chef.”

When lunchtime rolled around on set, crew members would suggest, “Let’s go down to Joe’s.” Gould would fry eggs, make cheese sandwiches, or cook burgers and fries for the crew. Newell still has a red conductor cap with brass buttons that Gould once gifted him.

Sharapan said that the crew had offices on the third floor and that they utilized the former ballroom as the studio for the show.

The filming location of “Mister Rogers’ Neighborhood” moved in 1971 from Pitt’s Music Building to a new building — where WQED is located now — on Fifth Avenue next to Central Catholic High School.

The Music Building has since been renovated and includes the Theodore M. Finney Music Library, a piano lab, seminar rooms, an electronic music studio, ethnomusicology classrooms and the William Russell Robinson Recording Studio.

Between its physical restorations and its history as everything from a pastor’s house to a television set, Root described the Music Building as an integral piece of the Pitt community.

“[The Music Building] is a very lively place — lots of interesting sounds coming out of it all the time and lots of different kinds of music, research and thinking about the role of music in people’s lives,” Root said.

The Legacy Lives On

Years after Rogers passed away from stomach cancer in 2003, the Fred Rogers Company began producing an animated children’s television series — “Daniel Tiger’s Neighborhood” — that is based on the Neighborhood of Make-Believe where Roger’s puppets lived.

The main character in “Daniel Tiger’s Neighborhood,” which still runs on PBS, is son of and is named after Daniel Tiger from “Mister Rogers’ Neighborhood,” according to Newell, who now works in the Public Relations Department of the Southside-based Fred Rogers Company.

“Daniel puts a sweater on and talks to the camera as Fred did — not as much as Fred did, but it relates. The program also deals with some of the same topics, and it has a trolley in it, and they go to the Neighborhood of Make-Believe,” Newell said.

Sharapan — in addition to being senior fellow at the Fred Rogers Center — is the script consultant on “Daniel Tiger’s Neighborhood” and said even in her current job she continues to use lessons she learned from Rogers and her time with his show.

“[Rogers’] messages were also for all of us. What do you do with the mad that you feel? How do you use that anger constructively?” Sharapan said. “It wasn’t just for a 6-year-old or a 4-year-old.”